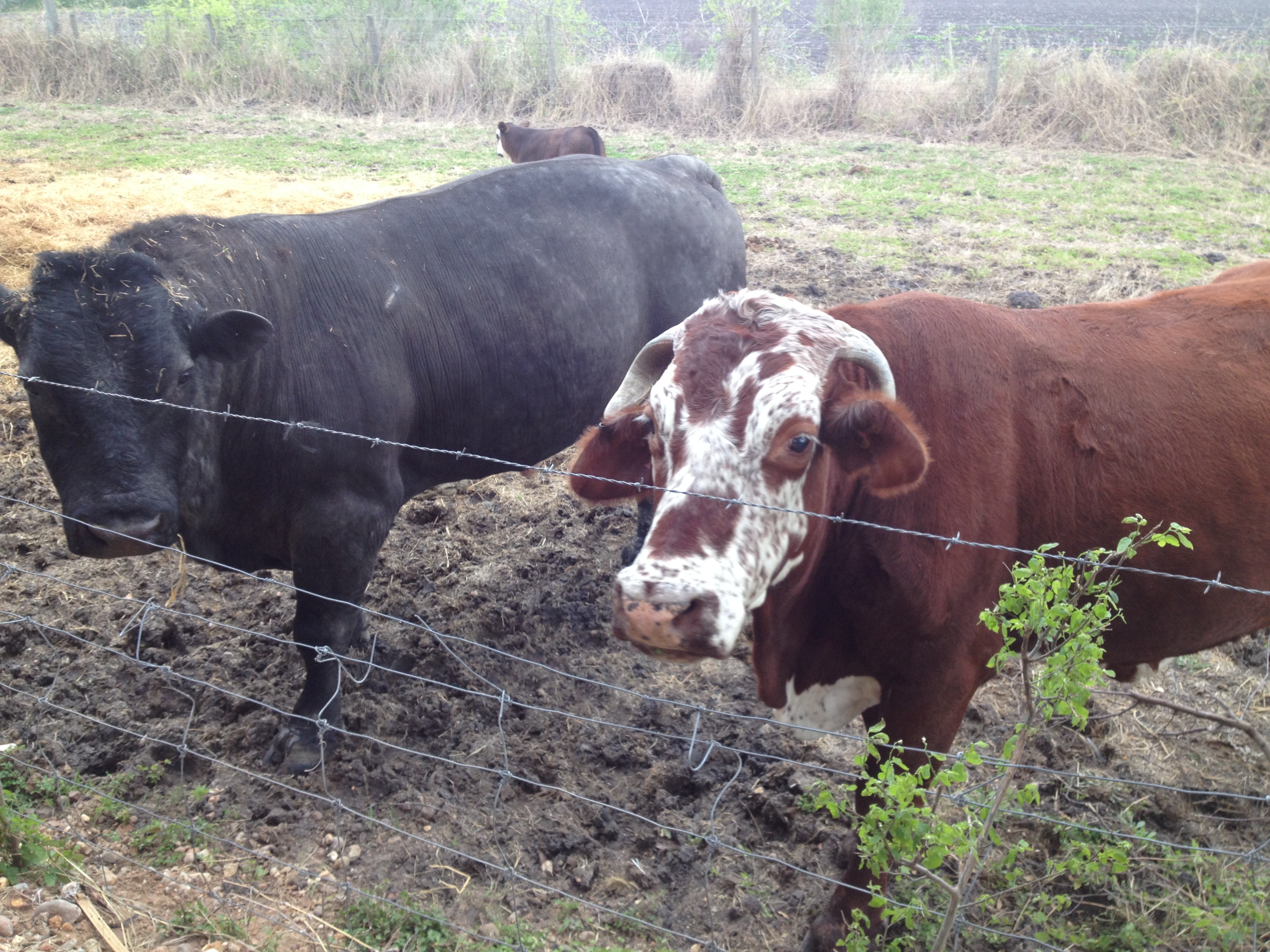 Before the age of dinosaurs, farm animals ruled the world. Humans were a domesticated sub species trained for menial tasks such as stall sweeping.

The ruling families of the land were the Bovines.

As is the case in most society, the entire world—or at least all of Kensington Farms—knew of the troubles in the kingdom.

The marriage of King Casanova and Lady Bonnie Bell was on the rocks.

Long gone were the days when Casanova had brought Bonnie Bell to the best buttercups and scratching fence posts. Years had passed since he had remarked about the exquisite beauty of her feathery long lashes that framed her amber brown eyes. In fact, just as she seemed to get helplessly plumper, he became leaner (and privately meaner.)

In public, Casanova usually pretended his affection for Bonnie Bell. His appearance before others was more important than truth itself. However, when he was in the privacy of the royal quarters, Casanova mostly ignored Bonnie Bell or pointed out her declining shape. She caught him frequently standing near the watering troughs casting long lusting gazes at the more athletic bovines. As his sense of self-importance grew, Casanova no longer sought Bonnie Bell’s opinion on anything.

Lady Bonnie Bell, being the most outspoken of the two, decided her revenge would be public. She made it her prime focus to express her dissatisfaction with King Casanova at every herd gathering. Her list of complaints against her mate had built up over time, and scathing words were her retaliation for his inattention to her.

Because of her continual mooing, the rest of the herd (willing or not) were exposed to details about King Casanova’s personality that his wife found detestable.

According to Lady Bonnie Bell, King Casanova had no spine. He let others trample all over him. He was a slob, and whenever he chowed down at the hay bale, bits of grass managed to stick all over his royal robe. He schlumped over when he walked. He could no longer dance by the light of the moon to save his life, and his jokes were feeble.

Unfortunately, as it happens many marriages, when mates berate each other in public or in private, their love feelings begin to unravel.

King Casanova, as he had been prone to do, immediately found a sympathetic audience. He did not seek the company of an advisor, or a fellow bull, but instead he confided in an adoring female bovine, who saw him as he wanted to be perceived, ruggedly handsome and without flaws.

When Lady Bonnie Bell got wind of the situation, she went berserk. She insisted that her advisor, a turtledove of Mediterranean descent named Solomon, compose a very moo-ving,” stinging, and critical review of Casanova’s rule. She then ordered him to drop it anonymously in the chicken coop where it was certain to make the morning show, a clucking extravaganza conducted daily by the barnyard fowls.

Under duress, Solomon completed the editorial but then flew to his perch with it above Lady Bonnie Bell’s reach. He continued to advise strongly against her plan.

“Your ladyship, I must caution you about such caustic mooing. It will only bring more trouble.”

“What are you suggesting obstinate bird?

“My namesake King Solomon once said…“the mouth of the foolish is a present destruction.” (Proverbs 10:14)

Bonnie Bell looked at the small dove and snorted.

“Casanova is the fool!”

“He who restrains his lips is prudent. In a multitude of words transgression is not lacking.” (Proverbs 10:19)

“Why should I restrain myself? Casanova started it, and I’m going to outdo him once and for all.”

“Is that what you want? You want to “out moo” him? I thought you wanted to stay married.”

For an infinitesimal moment Bonnie Bell was silent, so Solomon used the opportunity to proclaim one more quote.

“The mouths of the righteous (harmonious with God) bring forth skillful and Godly wisdom, but the perverse tongue shall be cut down like a barren rotten tree.” (Proverbs 10:31)

In anger, Bonnie Bell tossed her head, which inadvertently caused her royal tiara to fly towards Solomon. The bird sidestepped and lost his grip on the paper. Before he could swoop in to capture it, Lady Bonnie Bell had her hoof on it.

“I’ll take the paper to the chicken coop myself. No need to trouble yourself.”

Lady Bonnie Bell stomped away into the night holding the paper delicately in her mouth.

(The rest of this story will now be authored by Adam Lazarine, the blog narrator’s daughter’s youth pastor. Adam presents the rest of the events from a different vantage point. His account appeared recently in our local newspaper.)

As Lady Bonnie Bell passed by a stand of trees that night on her way to the chicken coop to deliver the “moo—ving” and incriminating piece of paper about her husband’s leadership, she witnessed the same scene that Adam narrates….

“It turns out that same night two women escaped from prison. They were running, and of course, when the guards discovered that they had escaped, they went after them with dogs to follow their scent and to track them down.

The two women heard the barking in the distance and knew the guards and dogs were closing in. Panicking and needing to do something, the woman decided to climb a tree and hide. The second woman decided to follow her lead and she climbed a tree located about fifty feet away.

The dogs arrived and picked up the scent at the first tree. They began to jump up on the tree and bark loudly. The first lady up the tree was of course panicking because she had been located, but ingeniously, she began to make cooing sounds: “Coo, coo, coo.” The prison guard jerked the dog back from the tree and said, “Come on, let’s go, it’s nothing but a dumb bird up there.” She had deflected the dog.

(Now your Blog author picks up the story.)

After “mooing” instead of “cooing” the guards immediately discovered and captured the female convict.

The whole chase and capture became a life changing event for Lady Bonnie Bell because it  perfectly illustrated what Solomon had been trying to tell her. Under conviction, she swallowed the paper of incriminating words and went back to the royal barn to begin a new strategy of “cooing.”

Interestingly enough, King Casanova also witnessed the convict-capturing event, (since he was lamenting to his female confident near the same tree stand.) He, too, had been under conviction, and although he did not see Lady Bonnie Bell pass by, he saw the error of his ways. The capture of the convict gave him a clear picture of where wrong actions lead. Wrong actions caused more wrong actions. There was no escape. It was just like being in prison. The only way to get free was to break the cycle and do what was right.

Adam  offers an explanation as to  how this convict capturing event relates to marriage troubles.

“Cows don’t live in trees. When you’re confused on your role, you wind up making the wrong noise, at the wrong time, in the wrong place.

Many women are making a lot of noise complaining about their husbands. They complain about what’s wrong with their man, when they have forsaken and neglected their biblical roles. They are mooing when they ought to be cooing.

Now before all the women reading this article come beating down my door, consider the role of the man.

Husbands, love your wives, just as Christ loved the church and gave himself up for her to make her holy, cleansing her by the washing with water through the word.”

One way to disarm the antagonism external culture may inject concerning this scripture is to remember that …..

…..the wife gets to submit and the husband gets to die.

Submission for the woman becomes so much easier when the husband dies to himself.

Christ greatest act of selflessness was to die to himself for the sake of his people. The wife needs to acknowledge the headship of the man (Cooing), but the man should be leading out of a selflessness that promotes service…not dominance.

Take the challenge to cultivate a marriage that reflects a picture of the relationship between Christ and his church, not just between a man and a woman.”

King Casanova and Lady Bonnie Bell can testify to the truth of Adam’s words.

Also, since the bovine couples “turn around,” they do a lot more cooing. They often spend quality couple’s time working on new recipes for their “Blue Bell” ice cream concoctions.

Have you ever tasted Blue Bell ice cream? To my faulty recollection, this cool sweet treat is named after Bell and the marital convictions that hit the bovine couple that day “out of the blue.”