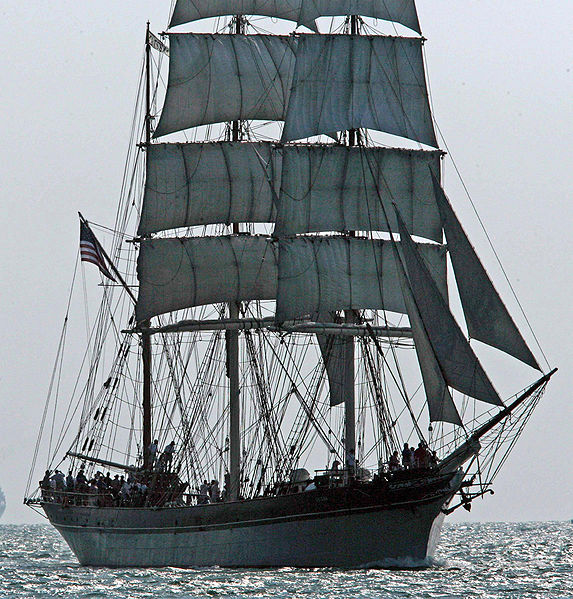 or…. A Sailing Sinner’s Lament

In vessel small
I wandered out,
my stubborn will for wind.
I tried to cross the stormy sea
without a glimpse at Him.

Till nearly drowned
and broke apart,
I spied majestic, tall,
a sailing ship, white masts unfurled,
as if to gather all.

In futile scream
I cried aloud
across the rolling boil,
“O God of hosts return again
and rescue this poor soul!”

Astonished that
the craft did turn,
I wept beneath my toil,
for coming towards me on the mast
was Him, my sweet Savior.

His arms were splayed,
His hands were nailed,
a crown upon His head.
The sails were spotted by His blood,
He hung as if were dead.

Then all around
my sea grew calm
my vessel strung to His.
I heard a voice from up above
say, “This is my beloved.”

Oh Jesus, dear,
You rose again,
My life you did restore,
Please help me chose Your way alone
to live forevermore.

When I first saw her, she was a 105 year-old wasted hull. I remember her dingy body and her cavernous belly full of nothing but iron filings. Her name was Elissa, and she was in the port of Galveston, brought over from Europe to be restored. My husband and I hoped to volunteer enough hours cleaning her insides to boost his chances of sailing on her first voyage after the restoration was complete. His schoolwork and my work schedule hindered our lofty goal. In the end, when we saw her years later with her multiple sails unfurled like so many wings, all we could do was admire the ease with which her iron hull moved in and out of the rolling water. Human effort had succeeded in returning the Elissa to her former glory and function.

Restoration of many things is achieved through human effort. However there are equal amounts of things that cannot be restored through human effort alone. The most significant is our relationship to God. Psalm 80 speaks to this problem as the writer laments the distressing position of God’s people. It seems they were in a place of disharmony with their Maker.

I can relate to this situation. When I go against what God has proclaimed through His word, then I reach a position of disharmony with God. I can do nothing about my position of disharmony or “make up” for my actions, except to beg His mercy and forgiveness. I compound my sin by believing I can achieve forgiveness by doing good deeds instead of accepting what He has said. He has said in His words in the Bible that I can never be good enough. I must repent and ask for His merciful forgiveness and only then am I RESTORED.

Even though I may receive His forgiveness for the asking, the consequences of my sin are not magically erased. Using an example of a vine, the Psalmist portrays the downfall of God’s people and the consequences for their disharmony with God. Although the Psalm speaks about God’s people of the past, it is easily applied to us today. Back then, the words “God’s people” meant the Israelites, but we know from the events in the New Testament that the definition of “God’s people” was forever changed by the arrival of Christ. To be numbered as a member of God’s people today you can be ANYONE—anyone who would agree to the words and plans of God as explained in the Bible, including God’s merciful provision of Christ as the substitute sacrifice for our sin.

Here’s the allegory found in verses 8-13 about God’s people being like a vine.

You brought a vine (Israel) out of Egypt; You drove out the heathen nations and planted it in Canaan. You prepared room before it, and it took deep root and it filled the land. The mountains were covered with the shadow of it, and the boughs of it were like great cedars. Its boughs sent out to the sea and its branches to the river.

Why have You broken down its hedges and walls so that all who pass by pluck its fruit? The boar out of the woods wastes it and the wild beast of the field feed on it.

Do these phrases remind you of a time when you were like a prolific vine functioning at your best and in harmony with God? Maybe you, like I, have fallen away and now need to be restored. On the other hand, maybe you have never experienced life at your best, and you have never known harmony with God. Did you know that in spite of our waywardness, if we are willing, God can restore us to Himself? He’s waiting for us to ask.

In this Psalm, the plea for restoration appears three times. Verses 3, 7, 19

Restore us again, O God; and cause Your face to shine in pleasure, approval, and favor on us and we shall be saved.

My prayer is this. “O God, help us to run to You and ask for Your restoration. It is You alone who is able to set aright what is not. Help us to see that no one else and nothing else can accomplish this task. Amen.”

One Response to Psalm 80: Begging for Restoration