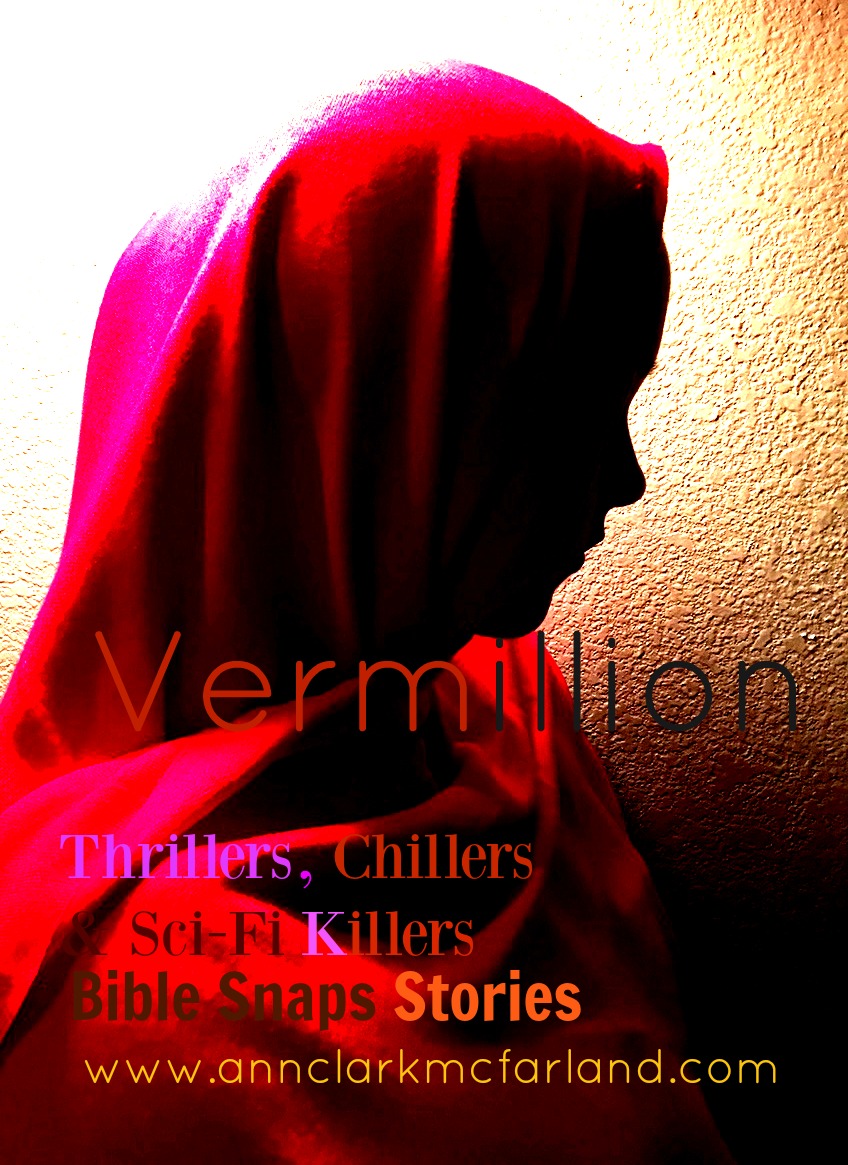 Thrillers, Chillers & Sci-Fi Killers. Whether or not you believe the bible is true, it contains stories that trigger imagination.

The gods are angry. Bolts of fire strike the fields below. Rain hurls mud and debris over a nearby cliff.  I hide in a cave in case their appetite turns to vermillion blood like mine.

Unlike me, the gods do not bleed. They consume.

Sometimes it happens in an instant. A fire swallows those who defy them. A man drowns or falls into a freshly opened crack in the ground. Slower punishment comes with disease or the steady wind that blows dry every spring until no life can stand.

The night my first husband’s body was devoured, I was home in bed, but he was with his friends seeking pleasure in the town of Dothan. The quest was a nightly habit that consumed them.

When Er’s ashes were brought to me, I immediately became an obedient widow and grieved valiantly, but my sorrow came mostly because of the lost opportunity to conceive a child. After six years of marriage, I still didn’t know Er. How could I have loved him? He was a stranger to me.

Marrying a stranger is not the problem. My father gave me to be the wife of the grandson of Israel. They are a prominent family. But ever since I’ve met them, my life has been upside-down. My girlhood dreams of marriage and family are nothing like the real event. I thought words and actions would be the fertile ground to grow us familiar and understanding and love would soon follow.

Guess what? The more I understood Er the more I knew he would never love me. His first intimate words to me were a humiliating clue. “You stink,” he said and then laughed and added that I smelled like a woman. He stuffed wool in his nose to keep from smelling my wedding perfume. He offered himself to me twice for the sake of children. After that, he hardly spoke to me.

After Er died, my father in law asked Onan to honor the custom and marry me.

Onan agreed to do what Judah asked, but to me he said privately, “I will not give you children to credit to my no-good brother’s name.” Then he took me to his bed but made sure I would not conceive.

The next time this happened, I was bold in my protest. I intercepted his leaving caravan and insisted he hear me. “I’ve done nothing wrong to deserve this treatment. Why am I to be punished and not have a child or a future because of you?”

“That is your problem and the problem of your father who gave you to us. I wash my hands.” Onan’s words hardly left his mouth when his camel load slipped and the animal spooked. Onan was caught in the trappings and the camel drug him against some rocks and trampled him before he could get free.

When Judah heard, he sent me back to my father’s house to wait for his youngest son to grow up.

Today I learned Shelah is betrothed. This confirms to me that Israel’s family believes that I’m cursed. The true reason for the death of their sons is kept hidden.

I know the truth.

My husbands died because they made their god angry. Although Judah claims there’s just one god, he doesn’t act like he believes it. Men like options. They have as many gods and goddesses as they do wives. Either way, the deaths of my husbands punishes me, too. Now, with Shelah’s betrothal, my dream for a child is mocked for the third time.

The rain stops. The sun comes out. I make my decision.

Rushing back to the house, I put away my widow’s clothes and pull on my veil. Wrapped in my disguise, I sit in the entrance of Enaim where Judah will pass on the way to his sheepshearers.

When it comes to gaining a child, I fear no one.

Waiting for him arrive gives me doubts. I could be killed, but then again, without children, I’m already dead.

Vermillion is the color of my veil, and Judah’s grief for his wife is quickly allayed when he sees it.

“Have intercourse with me,” he says.

“What will you give me,” I ask. My heart pounds. Will he know my voice?

“I will send you a kid from my flock.”

I know I will need more than this. My brazen disguise fuels my persistence. “What will be your pledge until you send it?”

“What do you want?” His eagerness to see our deal making conclude is evident when removes his cloak.

“Give me your signet, your cord, and the staff in your hand.”

Have I asked too much? I swallow hard against the sickness of my plot.

Just then a gust of wind shifts my veil. I turn away to secure the unwrapping edges. Even though I expect it, I jump at the weight of his hand on my shoulder. He extends his other, offering the ring and cord. Keeping my pretense, I seize the pay. He will not yet know the true price. Without another word, he lays aside his staff, and I follow him into the shadows.

Three months later he sends for me. I barely have time to grab my bag. His servants treat me roughly, and torches are lit when I arrive.

Judah’s contempt is evident. “With disgraceful lewdness you have shamed our family. You and the child in your womb will be burned for this act of harlotry.” He motions for his servant to bring up a torch.

“Wait! I beg you, wait!” My face grows hot as my hands shake to undo the bag. “My child is conceived by the man to whom these articles belong.”

I pull out the signet ring and cord and motion for the staff to be brought in front of him.

“Make out clearly to whom these belong. All three. The signet, the cord, and the staff are all from one man.” Then in protest, I close my eyes. I will not give homage to a god who brings death.

Instead, a man’s humble acknowledgement bestows life. “She’s more righteous than I because I did not give her to Shelah my son.”

I live to see my delivery day. The gods must be waiting until the final moment to spurn my desire. As my labor drags on, I’m certain my punishment has come, but I fight back with all my might. Dear god we will live! I vow in my pain.

When the birth moment comes, my child’s hand slips out. The midwife grabs it and ties a thread around it and says, “This baby is born first.”

““How is this possible? Am I to be doubly blessed and not cursed?”

Her answer comes soon when the wails of my sons are quieted at my breast, “You are doubly blessed. The one who was first drew back his hand, so it was his brother who was born first instead.”

She unties the thread from my second born. “I first knew by this scarlet thread.”

I drift off to sleep but not before wondering about the god who is responsible for giving me back my life. If he’s this good to me, then maybe I should make him my only god.

Like the dye that I make, I make up my mind about God.

And like the dye that I make, He bleeds vermillion for me.

Inspired by reading the exact story in Genesis 38.

My new blog series, Bible Snaps are short fictionalized accounts of the more chilling stories in the Bible. There may even be a few “science fiction” type stories that reference biblical disasters that seem to conflict with the laws of nature.