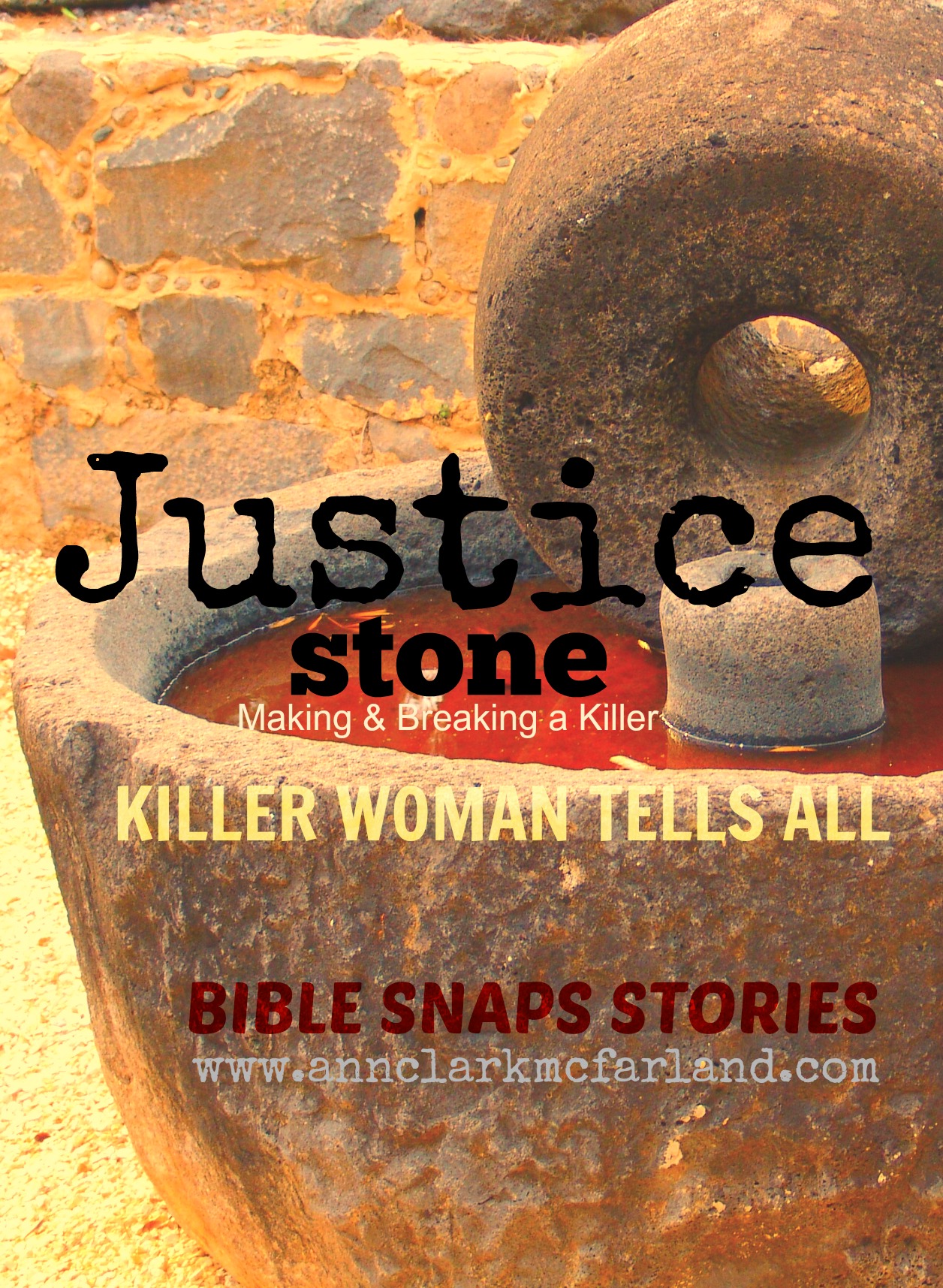 Thrillers, Chillers & Sci-Fi Killers. Whether or not you believe the bible is true, it contains stories that trigger imagination.

I stood on the tower roof waiting for the man who was coming to destroy our town.  Years ago, I knew him well. In my mind, I could still see him—the boy who played in the door of my tent while his mother sold wares in the market. My heart grieved for her. To the invisible boy I scolded, “Didn’t you learn anything from her tears?”

“Who are you talking to old woman?” The mayor looked startled.

I kept silent. This was not the time to explain my outburst. I needed to look sane, but inside my heart, I still raged at the boy.

The mayor and his men moved away arguing about strategy.

I closed my eyes in the noonday sun. Maybe they would think I was praying. Instead, I was seeing the fires that burned Shechem to the ground. I had no illusions about our fate. The same would come to us too. Abimelech’s appetite for power and wealth grew more ravenous with each passing day.

The boy had turned into a man who was a killer, and the truth of this fact crushed me.

I opened my eyes and stepped cautiously closer to the edge to look for signs of his approach. The wind blasted against me, and I lost my balance. My cries for help were smothered by the howling gale. Fortunately, two women came running and helped me to my feet.

“Find her a place to sit,” the mayor ordered. “But when Abimelech comes, she must stand so he can see her.”

Then he repeated the plan in my ear, speaking with exaggerated words as if I was stupid. “You must stay strong, woman. When Abimelech comes to the tower, you must show yourself.”

I nodded in agreement but knew he was skeptical of my ability. He wasn’t the only one who doubted. Very few believed that the errant son of Gideon would change his mind on account of me, his old caretaker. In fact, most thought that my pleas with Abimelech would be more likely to earn me the right to die first. To that end, none of it mattered. I’d seen enough of life. I was ready. Death seemed a kinder companion.

The woman led me across the roof to the corner where grain and provisions were being stacked. They directed me to sit at the grain mill, which was already in place so that meal could be made ready for daily bread. After all, until there were no mouths left to feed, food must still be prepared.

My perch gave no clear view of the ground. With so many moving bodies jammed onto the small space, I could only see brief glimpses of the town and the fields beyond.

I’d imagined an advantage in seeing Abimelech first before the rest. Perhaps with the extra time I could discern whether a tiny bit of the boy still lived in him.

To soothe my mounting sorrow, I asked aloud if I could grind. No one objected. It seemed the men wanted the ground entrance blocked, but women were still focused on getting provisions onto the tower roof.

I patted the mill for reassurance. A final opportunity to work at a task I’d done daily all my life seemed appropriate. The grain, of course would be wasted, because our resistance would be no match for his determination.

The others did not know what I knew.

Under ordinary circumstances, a town like ours could defend against an enemy like Abimelech, but it was his will—the passion that grew up from his childhood grief-that made him a matchless force.

I threw some grain in the mill and reached for the handle and began to turn. As the grain meal filled the cup below, I wished for comfort for the boy, but all I could find in my heart for him was great sadness.

Abimelech! Abimelech! I called to him again. Haven’t you had enough? Your bitter obsession about your father and his gold has stolen much from you.

The world had been made crazy by such things. I knew this to be true. The same evil had reigned in me until I also wanted to murder. It came the day the boy begged to be permitted to live with his father, Gideon. It grew even greater in me over the many days his mother cried because of his father’s insatiable hunger for many wives. Anger over these injustices had poisoned my mind for years, but eventually I learned a great truth.

No amount of gold or revenge could make up for harm done.

I felt grit about my feet and looked down through my tears to see a mound of grain spilled out from the overfilled cup. I reached to gather it and pain shot across my chest. Breathing was difficult. Perhaps if I could sing, the agony would ease.

Songs were always my comfort. They were also balm for the boy. When his mother left him in my care, he cried for her. But soon he knew enough to let melody spin their magic in his ear. As a boy, he believed my singing brought her back to him.

I opened my mouth to sing and the wind stopped it by whipping my face with my headscarf and sending a chill into my bones. The mockery was fierce. Remember? Nothing you sang to the concubine’s son brought his father back to him. Gideon had his family. Your songs failed the boy. Remember? Remember?

“But I held him tight. When he threw himself against the wall, I caught him and held him tight.” I yelled my defense to the wind, but no one noticed my shouts because everyone on the roof was yelling.

Suddenly I knew what to do. Evil would not have my boy.

“I will, but I want something in return.”

“The millstone. I must have it beside me for protection.”

“What kind of protection is that?” The women looked puzzled.

“Carry it for me and you will see.”

The gestures they made implied I was confused, but I refused to budge until the stone was lifted off the base.

I walked to the edge of the roof and looked down and saw him. He was acting as a man, shouting directions to his warriors to lay wood against the tower.

“Boy,” I called without force. The wind that fed the torches swallowed my voice.

Fire fingers pointed up to me from the ground.

“Boy!” I yelled again, this time shouting with everything I had inside of me.

Abimelech stopped and tilted his head back. The company with him stopped, too. Perhaps they wondered who dared to insult their leader in such a way.

“It’s me. Your old nursemaid.” I searched frantically for signs of the boy. “Stop this murdering. I’m asking you for our lives. I loved you like my own son and kept you safe. You must listen to me. Today must be the end of it.”

“I listen to no one, old woman. You’re nothing to me.” The wind lifted Abimelech’s dark hair and swirled it around him like snakes.

My heart sank. There was no sign of the boy.

Abimelech held a torch high. “I’m the one who says who lives and who dies. Seventy of my brothers died by my hand on one stone. A tower full of people is nothing to me.”

“Then neither is this.” I grabbed the millstone and dropped it over the edge before I could think. When I turned away from the edge, I sank to my knees. A stone for a stone.

A surging rally cry came from those near me. Arms lifted me up and hands led me back to where women and children were huddled together. In our shelter, I prayed for another chance to seek out the boy, but none came.

At last it was safe to come out. We were told news that seemed impossible. My stone had fallen with precise accuracy on Abimelech’s head and had crushed his skull. But even in this result, he had still hungered for his own will and ordered his armor bearer to thrust him through with the sword so that men would not say he died by the hand of a woman.

The mayor said that God brought justice by my stone, but my heart told me something else. My actions were not for anyone but the boy, who now lived freely in my heart.

Story inspired by “a certain woman cast an upper millstone down upon Abimelech’s head and broke his skull.” Judges 9:53 and Judges 8:22-9:57

My new blog series, Bible Snaps are short fictionalized accounts of the more chilling stories in the Bible. There may even be a few “science fiction” type stories that reference biblical disasters that seem to conflict with the laws of nature.

We live in rough times. People suffer under injustice. It’s good to see how the Bible, an old book that many value as true, contains helpful stories of people who were oppressed yet managed to live, survive, and thrive.