Bible Snaps: Episode 3 … The A to Z of Revenge 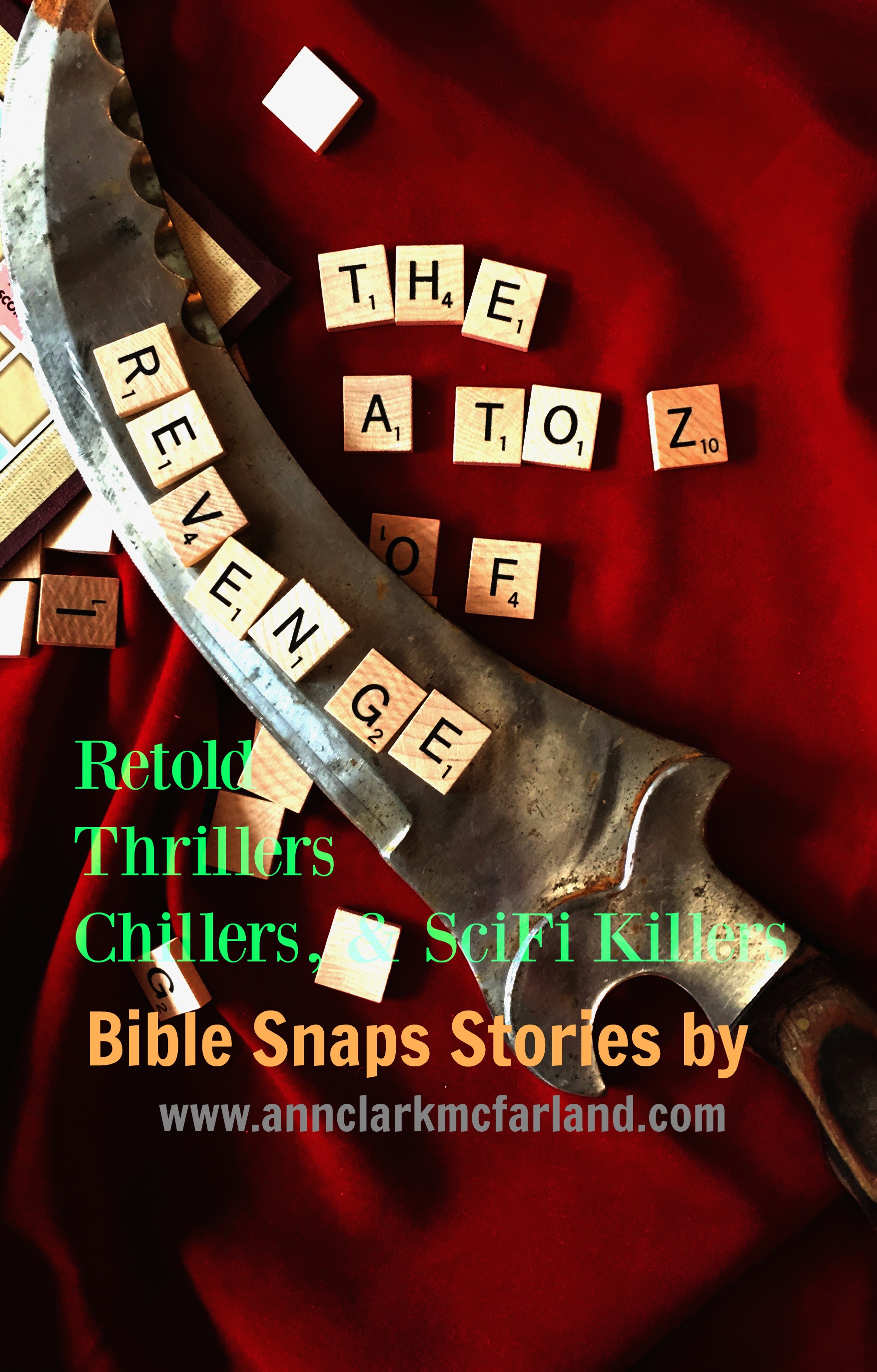 Thrillers, Chillers, & Sci-Fi Killers. Whether or not you believe the bible is true, it contains stories that trigger imagination.

The A to Z of Revenge

I rub the fragrant oil into my hands. Lamech will check for residue. He claims I ignore his requests to enhance my womanly attributes.

He’s right. I do. Why should I focus on my body, when I know it never pleases him?

Adah is his pleasure wife.  I’m his working wife.

Still, after last week’s beating, I make it a point to showcase my hand softening ritual when Lamech can see me. His punishment came because he claims my hands are too callous, and he insists that my brittle fingernails scratched a wound that now festers on his face.

It’s all a dramatic lie, of course. Lamech enjoys telling everyone what a goat I am and how charitable he is for taking me in as his wife.

The truth is, I would never voluntarily touch Lamech’s face, and we’ve seldom been intimate except every eight or nine months when Adah is too big with child.

The wounds on my back from his beating make sleep difficult.

“Hear my voice; you wives of Lamech, listen to what I say; for I have slain a man merely for wounding me, and a young man only for striking and bruising me. If Cain is avenged sevenfold, truly Lamech will be avenged seventy-sevenfold.”

I know his speech was a warning. I live on borrowed time, and it’s only the knife-making skills of my son that keep me alive. Nothing I do completely pleases Lamech, but my son’s metalwork continues to enchant him. Lamech often retires a murderous weapon after a specific use, and this tendency ensures that new knives must be made on a regular basis.

Lamech is a storyteller, and the tales he loves to tell most are about revenge. Tubal’s delivery of a fresh knife always triggers Lamech to pull out the collection box and brandish older weapons and launch into the corresponding narrative, making sure we all know how the victim wronged him and how they had earned the revenge that came to them.

Birthing a son is the only thing I’ve ever done right, according to Lamech. He named him Tubal-cain after the man he most admires, his five times great-grandfather, Cain.

I tuck the bottle of oil back into the alcove with Adah’s perfumes. Lamech has left the table, and I’m free to eat, but the pleading of Adah’s voice behind the drape is unsettling. I will not wait to hear the result.

I step outside and head for the evening water draw. When I lower the bucket into the well, I see how the oil made my skin look even darker. The color is a trademark of my family and the reason for my name.

Unlike Lamech, my father was pleased to have a daughter, and he named me Zillah, or “shadow”, because of my skin and the timing of my birth. I arrived during the night of a dark moon. The brown deepens with every day I work outside, but as long as I’m able, I’ll stay with the herds. Every morning Lamech finds it amusing to hold my bare arm against Adah’s and remark how brown and ugly I am compared to her, but I don’t care as long as he leaves me alone.

Lamech took two wives on the same day, and on that day, he gave Adah her name because it means ornament. All who see her admire her beauty, but I would not trade places with her for anything. My days are hard, but Adah’s nights are worse. Today she is sick with child again. Yet still he would seek her company.

Hoisting my load, I look up and see Naamah running toward me from the fields. I set the water down and wait.

She arrives out of breath.

When I reach to tuck a lock of hair back under her scarf, I see excitement in her eyes. “Daughter, what is it? Why do you run?”

“You never speak of him, but Hannah tells me he made us and he is with us.”

“The daughter of my cousin, Enoch. She comes to water his herds at the far fields and we talk. She tells me her father walks and talks with God, only no one actually sees his God. They just see Enoch kneeling and talking to the hills.”

“Then this is your answer. Enoch’s crazy. There’s no god who walks and talks with us. There’s only the god of Cain and your father, and he’s the one who avenges us.”

“Could they be the same god?”

“No.” I pick up the water. “God is the one who punishes and gives revenge. He does not walk and talk with men. Now fill your bucket so we can return and avoid his wrath.”

“What about women? You, mama. Do you talk to god?”

I do not answer right away, but I know if her curiosity remains unquenched, she’ll continue to press me, and she must not do so in Lamech’s presence. He has little patience for his daughter.

After we pass the big tree, I say, “Listen to me carefully, my daughter. You must not make god into something he’s not. He is very powerful and can destroy us in an instant. It’s best to be quiet in his presence.”

After this, she becomes silent. She’s learning. A woman does better when she is silent at the right time.

But then, even when we are not quite halfway, we hear the fighting. Lamech yells like never before, and Adah’s wails are full of pain.

Naamah grips my arm. “Mama. He’s troubling her again. What can we do?” Her voice comes out in a little girl whisper.

The sounds from the tent make my stomach roll. Help me. I pray to my silent god. We wait for quiet to come, but it only gets worse.

Inside, my turmoil shifts from rivulets of fear to rising wave crests,  swollen by anger and defense.

I’m filled with power and resolve to do what I’ve promised myself I’d do. Adah does not know, but the timing is right for Naamah to learn a new lesson. Knowing how to keep a secret from a husband tyrant is vital to her safety.

“What I tell you to do, you must never speak of to anyone else. Is that clear?”

She nods and our eyes meet in the sunset glow. “I won’t, mamma. I won’t. I promise.”

Her skin is brown like mine, but her innocence is so fresh. I ache for the days ahead of her.

No time for sorrow.  I speak in calming tones. “Run quickly back to the well and gather stems from the donkey tail vine growing there, but be careful not to get the sap on your skin.” I set my water down. “I’ll wait for you here. Leave your water.”

“Only sometimes. Mostly, sickness of breath comes for a time, but it’s our only way.”

“Whose way, mamma? Are we going to eat them?”

“No, my love. Not us. Him.” I point to the tent, now alive with human pain and suffering. I cradle her shaking body, holding her close to me and wiping the tears from her eyes. “Hush. Hush. It’s going to be okay. It’s time for his favorite drink, and this time, we’re going to make it.”

Author’s 2 notations:  First? Human abuse should never be tolerated. Second? Without mercy or an act of God, revenge only births more revenge. I developed this fiction account from the prompt of Genesis 4:19-24. Read the REAL Bible story there.

2 Responses to Bible Snaps: Episode 3 … The A to Z of Revenge