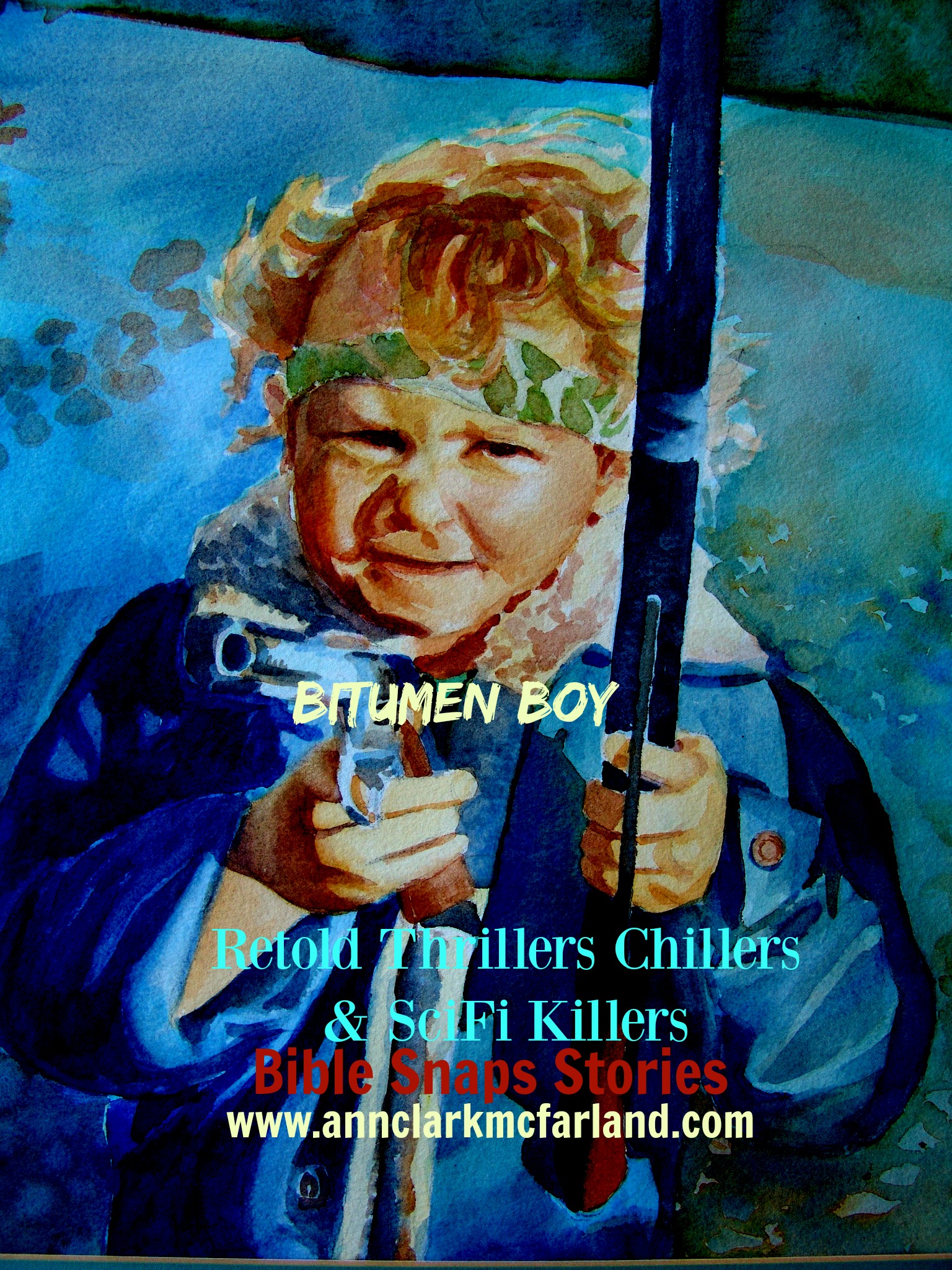 Thrillers, Chillers, & Sci-Fi Killers Whether or not you believe the bible is true, it contains stories that trigger imagination.

Pleas of dying men fill the air. The armies of Chedorlaomer surround us. Five kings against four should bring us victory, but instead our men were driven into the tar pits.

Lying still beside some bodies, I manage to play dead until the warriors move on.

When I’m able to make a run for it, I dart between rocks and shrubs to keep my cover. I work my way along the edge of the valley to avoid the inky pools that are abundant in the center.

My only goal is to reach the next village and find my Jael. When we heard news of the coming attack, my mother sent her on ahead. I pray to God they are both safe. My sister is beautiful. An enemy would not think twice about taking her for a wife or worse.

Catching my breath behind a large boulder, I look down out of habit to search for a better stone.

No stupid. Now is not the time. I feel the stones in my pouch. They will have to do.   I keep no more than eight and sometimes even then, I discard. I’m quickest on my feet without the weight, but since I’ve begun herding, I’m learning to be prepared. My slingshot is my only weapon.

I adjust the pouch and move to take off, but my foot remains fixed to the ground. I’ve managed to stand long enough to get stuck in the tar-filled sand. I struggle to pull out my foot and then with a sucking pop, it releases, and I’m thrown off balance to the ground.

I leap up quickly and move to find more stable soil. That’s when I hear the moaning.

I turn around and notice a figure lying beside a pool several paces away. He’s covered with slime and beckons for help. I hesitate, but his cries of anguish draw me to him.

I reach out my hand. His slimy fingers grip mine with surprising strength.

Wary of the brute, I twist free and move away. He only moans, turns over onto his back, and presses his hand against his chest. Blood trickles from between his fingers.

I come close again and fumble for my flask to offer water.

Suddenly, he grabs the hem of my tunic and sweeps my feet out from under me. In seconds, he’s above me, and I’m fighting for my life.

He pins me to the ground with his knee. “There, there. No need to keep struggling. What can a boy do against a man?”

He hoists me up and wipes his tarry hands on the front of my robe. “I may be wounded, but you’ll find my arrows fly true.” He fumbles under his robe and pulls out an arrow and drags the pointed tip down my cheek. “If I were you, I wouldn’t run.”

Then picking up his bow from the shadows between the rocks, he prods me to walk in front of him. “What’s your name?”

Fear holds my tongue. I can hear him laboring behind me. His wound may not be fatal but it will surely slow him down. The weight of his hand falls on my shoulder as he steadies himself. I feel his breath tickle my ear. “That’s okay. I’ll just call you Bitumen Boy, because you’re as dark as the dirt.

When we reach solid ground again, he pauses to strap his gear onto my back. “Lucky I’m here for your rescue. Your gratitude means you’ll serve me until we get far away from this foul place.”

Then he has me tear the hem of my garment and use it to bind his chest wound. He grows silent and leans on me as we pick our way between the pits.

Reaching the crossroad, he chooses the direction of Sodom, and for this, I’m glad. It is the opposite direction from where the armies were headed. We’ll pass right through the village. There, in the likely bustle of a town concerned with the fighting, I’ll find Jael and we’ll make our escape, doubling back to our own village.

Our progress is slow due to his condition. When we reach the herd lands outside of the village, we stop at the farthest well before entering. No one is there to draw water and I find no sign of the flocks. Something is wrong. I’ve no time to discern because he too senses the void and wants me to go in alone and find food.

“Remember, if you come back to me, you’ll be safer. A boy with a sling is no match for a warrior. My men will not touch you as long as you are with me.”

I know he’s right, and I can’t risk my life until I’ve found Jael.

I leave him sitting by the well. I follow the road down a hill to the dwellings. When I reach the first house, there’s no sign of life, but pot shards are scattered across the room.

I feel sick and run house to house calling for Jael, but no one appears. Broken gates, disheveled furnishings and the absence of provisions, animals, and people all are evidence that the armies of Chedorlaomer came here too. They’ve picked the place clean.

It’s the man at the well whose friends likely did this. I vow to steal his bow and head out for Sodom on my own when he’s asleep. If the armies have swept this village, Sodom and Gomorrah may have been next.

I finish searching the village, and find a forgotten loaf of bread gone cold on the oven. Some dates tumbled on the floor are salvageable.  But the best thing I find is what I don’t. There aren’t any dead bodies. This discovery makes me hopeful. Jael must be alive. Kings will kill the fighting men, but woman and children are kept alive to become slaves.

Rich folk can’t get enough of them. Somewhere ahead of me is a caravan of captives, a human treasure trove of slaves and Jael must be with them. They are probably headed to Elam where Chedorlaomer reigns.

That night, when the moon rises to its highest point, my captor begins to snore. I slip his bow out from his arm. I wish I had the courage to kill him, but I don’t trust my strength. I’ve never shot a bow before, but perhaps I can trade it in Sodom for a knife.

It turns out, my plan did not help me. I reach Sodom at daybreak, but the armies have moved on carrying off all the provisions of the city.  I’m told that the captives now include a famous man called Lot and all his family.

An old woman speaks sadly, “The only one who can help him now is Abram.”

“Where can I find him? Perhaps he can help me find my sister too.”

The woman points back the direction I’ve come. “He lives by the oaks of Mamre, the Amorite. Run quickly before the soldier’s guard finds you here and takes you too.”

The woman is right. I found Abram’s home by the oaks and tell him the news. He takes 318 of his trained men to pursue the king’s forces.

He asks me to stay and help guard his family and promises to search for Jael.

Many days pass. I receive word from travelers that my mother is safe back at our village. But no news comes about Abram’s chase except that he still pursues the enemy.

Then one day as I’m watering the herds at the far well and pleading with God to keep Jael safe, I see riders coming down the mountain like a storm.

One rider is in the lead and far ahead of the others. It is because of this that we know we were safe because an army would not send someone alone in plain view unless he comes in peace.

The women and children gather and soon we hear the news that Abram has returned. His family cries and women shout praises to God.

I run to meet them and take the rope of his horse when he draws near. He gets off and gently lifts the rider who sits behind him.

It’s Jael! She’s so covered up no one would know she was a woman.

I fall to my knees and weep, but Abram lifted me up. “Bow only to God, my son. For he is our maker and savior. Thank Him. It is He who kept your sister safe.”

The women make a circle around us and clap and sing.

I hug Jael, and she whispers in my ear, “I knew you would find a way, Bitumen Boy.”

She points to a man from the group of riders who is now being greeted by a woman.

It is my captor.

“He told us the story of a boy who stole his bow. I knew right away from his description it was you.”

“Isn’t he with Chaderlaomer’s army?”

“No, silly. He’s one of Lot’s men. He was out hunting when the armies came. Abram found him when he set out to rescue us. He left him in a safe place to rest and have his wounds treated. On the way back, Abram picked him up.”

There is more than one lesson I learned in the Valley of Sidim where the tar pits lie. But the best one is this.

It seems even before I fell, God had a plan to rescue me.

This story was inspired by Genesis, chapter 14, and especially verses 10 & 13