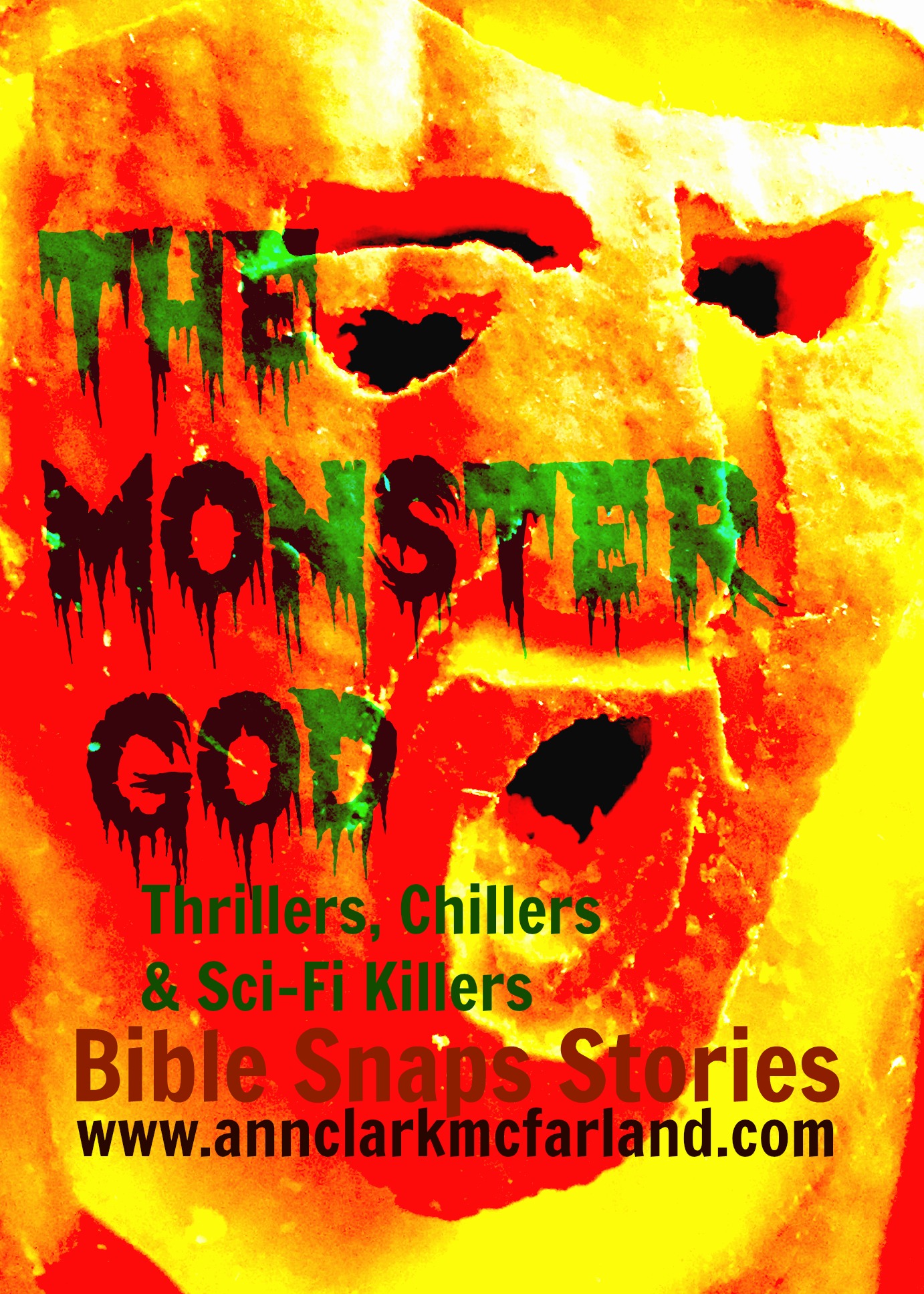 Thrillers, Chillers, & Sci-Fi Killers. Whether or not you believe the bible is true, it contains stories that trigger imagination.

“We had no choice.” I insist. “Besides, I made sure he was very drunk. He’ll never make the connection.”

“We shouldn’t have done it. We must tell him and beg his forgiveness.” Ivah’s voice is firm as she wraps the cord around her hand. Backing up, she makes a running leap but still misses the branch.

I place the jar of fruit scraps on the ground and give her a boost until she finds her grip. When my sister makes up her mind about something, her position is unshakable. All we have is each other and father, of course, but that’s our problem.

Directing her to a suitable limb, I watch as she climbs the tree. When she reaches the spot, she cuts off a counterweight branch and fastens the cord to it and throws the loose end over the bough to me where I secure it to the trap. Then I scatter fruit pieces on the open net and spread leaves on top to hide the snare.

As we walk back down the slope to the cave, I search for a way to change her mind.

“Ivah I need you to listen to me?”

“Do you believe we’ll always have the strength for this?

“Setting traps, hunting, finding our food in the brush instead of at the market?”

“There’s no market to buy from. We’re younger than father so we do the hunting.”

“Right. That’s the point. We take care of father, but when we get old, who will take care of us? We have no one to marry, and without that, we have no children.”

“I won’t do it again. Look at me Helah!” Ivah stands in front of me with her arms crossed. “Making father drunk and sleeping with him was vile and very wrong!”

Her words silence me. I’m not as certain as I sound about what we have done, but I don’t want my little sister to know this. I’m not worried that our drunken father will remember anything. I’m worried about our future.

After several miles of hiking, her voice comes from behind me. “There has to be another way. Maybe we can pray to Abraham’s god.”

“Really?” I snap. “Such tales you believe. If Abraham’s monster god is real, then there’s only one thing we need to know. He kills people for sport.”

“Which is exactly what he’ll do to us since we’ve done this horrible thing. Father can still find us a husband. We will beg him again.” She turns abruptly off the trail and heads for the shortcut.

“You don’t get it. The firestorm killed off anyone around here for miles. Maybe everyone in the world like Noah and the floods.” I holler at her fast disappearing backside.

I feel the heat creeping up into my neck as my frustration rises. I move quickly to catch up to her, skillfully sidestepping the loose rocks that carpet our home front.

Before we are in hearing distance of the cave, I grab her arm turning her forcibly around to make my final plea. “Ivah, listen to me. You’re so naïve. We’ve begged father to go out and hunt for anything, man or beast, but he won’t. No food. No mate. Nothing. He’s gone out of his mind since the destruction. Mother taught us that women make their own destiny. That is what we do. We make our own destiny.”

“You’ve changed so much, Helah. I don’t know you anymore.” She grabs the rabbit carcass and marches off.

Her words cut into my heart. They also remind me of the strange dream I had last night.

There was a grand party at our home in Sodom. It was like the ones we used to have. People were happy and dressed in fine clothes. Father sent the servants to bring us into the banquet to dance for his company, but when we arrived, he told his friends the servants had mistakenly called in beggars from the street. I protested that I was his daughter, but he pointed out how my clothes were old and mended. He said he did not know me. Everyone laughed, and then I woke up.

I look to the sky and see the spiral tail of the fire we keep by the cave. I wish I could close my eyes and wake up in a new place.

Every day the emptiness builds, and I feel angry. Growing old in a cave is not the destiny I pictured. I’m tired of living destitute and afraid.

The monster god is responsible for this.

None of this should have happened. Mother should not have been punished for looking back. Father should have let us go back. He should pay attention to us and find a way to secure our future. We had so much in Sodom, and now we have nothing. It’s been 14 years since the monster god came and rained down the fiery destruction.

Mother always had to take the initiative. Father seldom stood in her way except for that day. Now that she’s gone, he acts like he’s forgotten how to live.

So now I’m taking the initiative. There’s no one else to care for us. The future of our family depends on me.

I reach the stream where I wash and sit on a rock. In the warmth of the sun, I remove my head scarf and pick out leaves and twigs from my hair. Mother would be horrified to find me this way.

I close my eyes to picture her face. She used to gather my hair in her hands and rub in scented oil to tame my waves. When she was pleased, she told funny stories and made me laugh. When she was angry, the servants stayed clear of her because her wrath often took the form of revenge against the one who wronged her.

I open my eyes. It’s no use. I can no longer remember her face except for that day.

I flip my hair over and lower my head to dip the strands into the icy water.

Months after the destruction, I wanted to go back to find something of her, but father insisted we could not. The last I time I saw her alive was when she turned around in front of me as we entered Zoar. Her mouth opened in shock at something behind me. I was about to look to what she was seeing when a violent light exploded nearby. I heard her scream. Then a there was a roaring rushing noise. A fierce hot wind swirled ashes down on us and we lost sight of her.

I heard father yelling, “Don’t look back.” I blindly rushed forward a few yards and then bumped against something. At first glance, I thought it was an ornate part of the city gate, but then I saw the carved open mouth. It was her. Completely covered in white and not moving. I reached to touch her arm and it fell off. Then I started screaming and father pulled me away as more light exploded around us. We ran.

On that day, with one destructive gulp, the monster god swallowed all that I knew and loved.

I hear a snap in the bushes and see Ivah walks toward me. “What if we have girls? Then what?”

With her words, I’m caught by the trap, and the monster god laughs at me.“You do not think I will reward your nasty behavior by giving you a child let alone a boy, now, did you?” His voice whispers

The monster god is right.  If we’re fortunate to conceive, our babies and us will die. If our babies are to live, I’m certain they will be girls. Male children are a gift. A monster god will not give gifts to those he hates. Awful behavior deserves no mercy. We’re about to be swallowed again, because I was stupid enough to provoke the monster god.

I don’t speak of this to Ivah. I treat father with the utmost respect, even though all he does is reach for more wine to drown his vivid memories. Every day, I pray for Ivah to be spared.

I know I deserve the punishment I will get, but Ivah followed my lead.

Fear keeps me company. My swelling stomach makes it hard to hunt, but I count my discomfort as nothing when Ivah reaches death as her turn comes.

In her final moments, I plead aloud with the monster of destruction. “Oh God take my life, or my child, but not Ivah. I’ve misled her. It was my fault; I’m so sorry.”

Her body goes limp as I take up her child. I see that it, too, is a boy. Placing the squalling infant next to my sleeping son, I feel a strange release.

Whisperings of Abraham’s god and the monster god blend as one. “Without me, your plans mismanage and destroy. Only my plans are perfect. Trust me!”

Then miracle of miracles another voice comes. It is Ivah. She struggles to lift her head. Over joyed, I pick up the child again and bring him close. “Look! Your gift. Sent from the monster god. A boy!”