Crying? Or In God’s Hands? 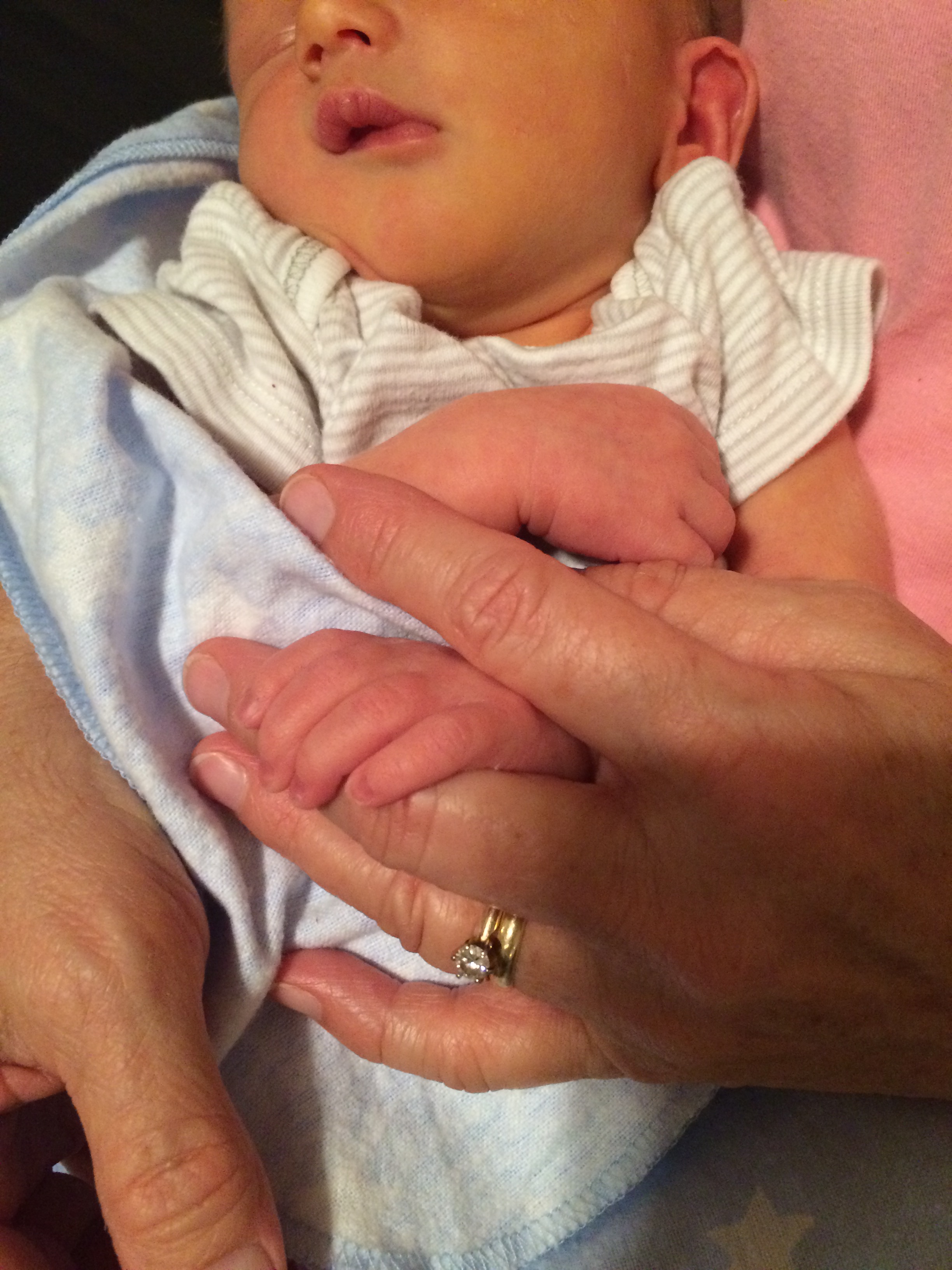 At a mere 6 pounds, 6 ½ ounces, I see how my new grandson can reduce his parents, who might otherwise feel competent, into a quaking mess of self-doubt. After they try every solution to fix the “trouble” that is causing the tears in their newborn’s eyes, they eventually regard the baby’s ongoing waterworks as a message that they are “not enough.”

Although mom and dad DO satisfactorily meet many of a newborn’s needs, some issues are still unsolvable by them. A baby’s cries are the indicator of that gap—the space between “human need” and solution. Problem areas are  things he must do for himself (things his parents cannot do for him) as well as consequences of living in the physical world.

Here is a short list of early “unfixable” human issues.

A new parent cannot burp for his child.

A new parent cannot sleep for his child.

A new parent cannot poop for his child.

A new parent cannot exercise his lungs and his voice on behalf of his child. (Although it is most likely that many a new parent has been driven to tears because of their infant’s crying.)

Each infant-size problem can become a reason to feel proud or inadequate if we measure by the yardstick of a child’s happiness.

“Fixing” problems can be intoxicating. When we suffer from this compulsion, we see ourselves existing to be “the problem solver.” When we can’t fix an issue or our solution is not chosen, we get angry, or we fall into guilt, and shame. Our focus keeps us sitting pretty for much tomfoolery.

A good lesson to take from a crying baby could be a lesson on perspective. How does God see our limitations concerning our desire to “fix problems?”

God creatively reminds me when my inconsolable grandson cries, “In human strength, you are not enough to sustain or even placate let alone “fix” the tiny world in front of you. How much more are you inadequate in solving the problems of others? Human lives are in my capable hands.”

What do I know about God’s ability to solve problems?

I know, in the fact of Christ’s life, God SERVED and GAVE up His life to “fix” the world.

Even more amazing, where I might wish for the success or control of a forced or robotic response, I find instead that recipients of God’s “love shower” have free will to reject His precious actions.

Indeed, the “fix” of God for the world resembles no other humanly contrived “fix.”

In terms of problem solving outcomes, God’s “fix” for the world’s main illness does not value any markers that measure human success.

God does not promise through His “fix” of us that we will be rich, famous, successful (in a worldly way), comfortable, well liked, admired, sought after, or looked up to. In fact, if we live in a true “Christ like” manner we will most certainly NOT be held in high esteem by the natural world.

If I know all this to be true about the power, rule, and plans of God, then why do I persist in acting as if I have the power to “fix” the lives of others? Additionally, if I serve as a Christian leader or mentor, why should I become offended or discouraged when my discipling efforts are rejected? I already know my perfect Christ was rejected unto death. Do I suppose myself more adept at portraying God’s desired ways than Christ did?

I must give up this tomfoolery!

First, I must stop believing I see the world’s evil tendencies better than anyone else does.

For those of us who are all about “causes” and “campaigns,” it is not a cold, unemotional response for a fellow Christian to remark that the world has always been at odds with God, and the world is not currently at any new greater “odds” with God. Technology plays a part in this false perception of “greater evil,” because it lets us know more about the “wrongness” of the world’s ills in a faster universal way, but that does not mean evil has become any greater than it already was when it required Christ’s death.

Evil, small or big, still must be confronted. However, we should by God’s grace maintain balance in responding to evil. God did not see fit to “safety bubble” us from evil or send us out for every evil “trouncing.” Christians often get caught up in words that “prime time” the horrors of evil instead of language that expresses the capabilities OF GOD against evil.

God, whether small in man’s eyes or all-powerful, IS STILL GREATER than evil by far.

God is still able to rule, even today.

God DOES rule, even today.

Anything else is tomfoolery.

If I am STILL tempted to maintain a foolish “fixer” role, then I must consider God’s questions to Job.

“Now gird up your loins like a man, And I will ask you, and you instruct Me! “ Where were you when I laid the foundation of the earth? Tell Me, if you have understanding, Who set its measurements? Since you know. Or who stretched the line on it? On what were its bases sunk? Or who laid its cornerstone, when the morning stars sang together and all the sons of God shouted for joy? Or who enclosed the sea with doors, when, bursting forth, it went out from the womb;…”