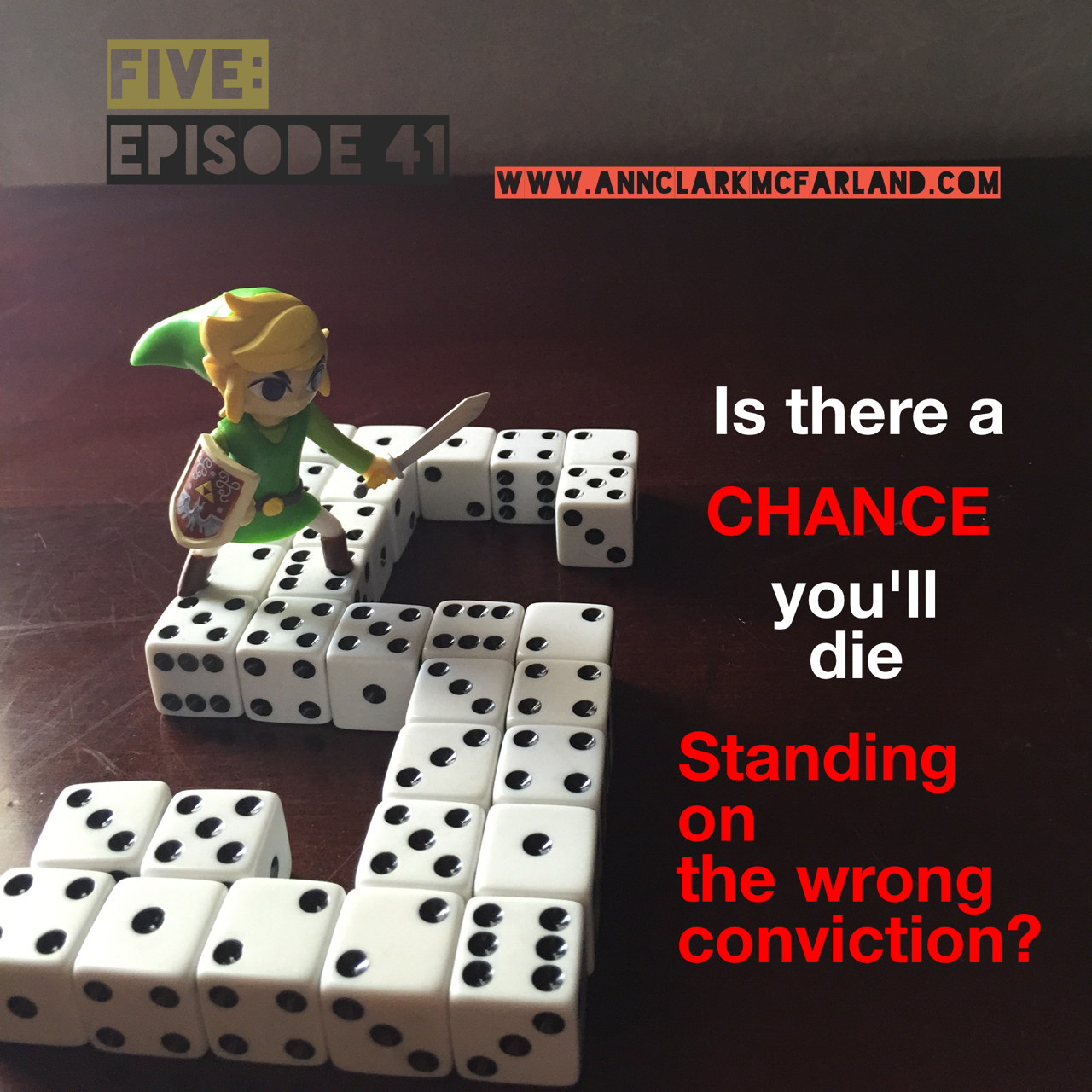 Five: Episode Forty-One is based off the following book excerpt from my science fiction, supernatural, thriller, The Contingency Generation.

“Glad you’ve arrived. I was just making up stuff till you got here.” Birch’s comic approach draws more laughs from the crowd.

He steps outside the sound ring, and I know his next words are for my ears only. “I didn’t call the meeting. Orders from above. They said you were notified.”

“I wasn’t.” I shoot back as I exchange positions to stand inside the outlined circle on the floor, the design space where all sound projects automatically.

As the medical team settles in their seats, I compose my impromptu address. It’s one thing to speak privately to Birch and ask him to support my request for a time extension. It’s quite another thing entirely to declare my hesitation in front of the entire group of medical assist teams who’ve been through months of training and preparation. I must dance a delicate tune of both confidence and caution.

“Hello everyone. Thank you for your kind applause, but please realize that this event, …resurrection of a human life …is very much a group effort. If you must give credit, then praise yourselves and your teammates for all the hours you have put into perfecting your medical skills to make this event even possible. Each vital organ team of experts …  brain, heart, kidney, liver, lungs … will contribute to the process when the time comes. Our first candidate, a female in her 30’s, died suddenly after a lifetime of general good health by way of the Bonemic plague. But the hope is … and our studies have shown that terminal illness mechanisms do not survive the extended state the body is exposed to inside the cylinder enclosure.”

I pause. Perhaps presenting my time extension request before the larger group is the best way to enlist support. Each medical team member holds a significant stake in the success of resurrection.

“I would be careless if I did not express my concern that there are still many unknowns. That is why I believe it is in the best interest of …”

Faltering over my next choice of words, I search the room for a familiar face to bring me confidence. My eyes lock on a vaguely familiar woman who sits at the end of the front row.

“Is it death we’re afraid of?” I ask the question as much to me as to him.

“What are you talking about?”

“I confess. I’ve always believed that nothing existed for a person after they died. But lately I’ve wondered if there’s another realm beyond death.”

“And your point is?”

“Well if there’s more, some kind of alternate life after death here, then we need to evaluate the impact of resurrection on a place we know nothing about.”

“Look Satan, if you want to believe there’s another realm, then fine. But what’s to say that it’s good? It could be a horrible place. Performing a resurrection could actually be a rescue from something that’s terribly bad. We’ll be thanked doubly. Once for bringing them back and again for increasing our species numbers.”

“I didn’t think of it that way.” Feeling heated, both over his use of my full name and the logic he carefully applies, I concede the point.

“Well you should. I don’t believe there’s anything else for us after death, but if there is—and by the way there’s talk about you and messages from Five. Many suppose that’s why you’ve been wavering …”

His words cease abruptly, and truth hits me square in the face.

Uncomfortable warmth spreads into my neck and down my spine.

His posture straightens and he speaks as if soothing a child. “Really, Satan. There’s no need to be concerned. It’s just talk. Mostly from the mouth of Plausibility, and no one gives a crap what they say. I refused their offer, but I did tell them that no matter what happened, I’d step in to finish the task if you still needed time.”

“Everyone’s been concerned about the sabotage attempt on your life, Satan.” His tone is sly and he begins to play with his puzzle again.

Feeling flustered, I protest. “It wasn’t that big a deal and—“

“And then there’s the disappearance of your friend’s body.” He cuts in as he swirls two pieces into place. “So many distractions. I can’t imagine the strain all this has had on you. But I told them I’ve the utmost faith in your professional work, and so do the others. At least the ones that matter. Most of the assist teams have confidence in you and…”  He pauses again.

His pretense at reluctance and sugarcoated implications infuriate me. I cut him off. “First of all, never ever refer to me by that name. I went through the courts to change my name from the childhood joke that it was when my father bestowed it on me years ago. It’s SJ. Two letters. Simple and clear to all concerned. Surely your asinine assumptions aren’t an indicator that you’ve also lost your grasp of the alphabet?”

I yank the legal consent tablet from his desk, and the corner passes through his air puzzle. The vibration causes his pieces to shift out of pattern. I’m glad when they fall.

“You know, Birch, it’s good for me to know where you stand. Your confidence in me is overwhelming. You can tell your network of doubters that I’m still fully able to carry on with the task. Whatever challenge is thrown my way, I’m certain I’ll conquer it as I always have, through logic and reason. It’s on that basis that I’ll lead the team or die standing!”