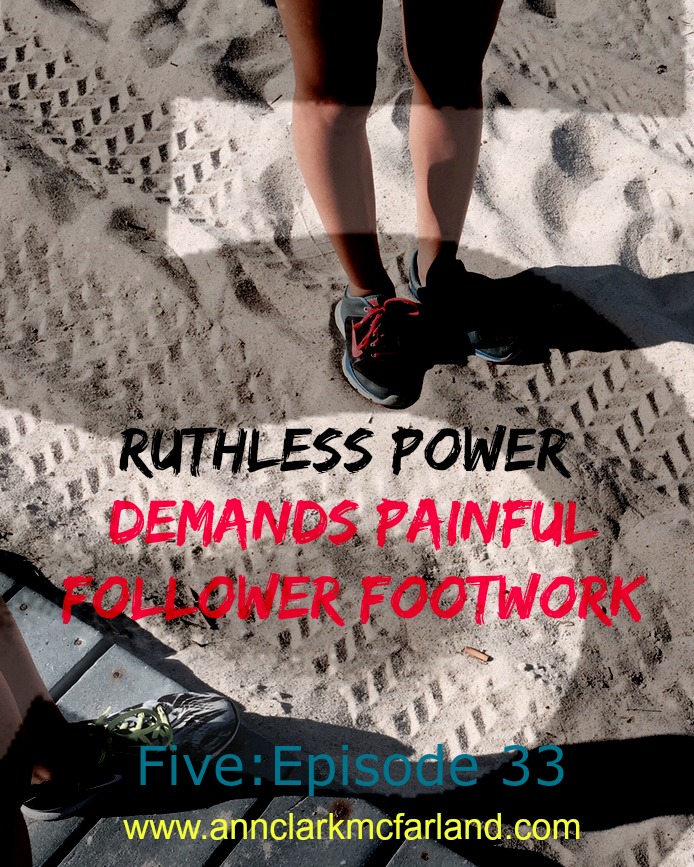 Five: Episode Thirty-three is based off the following book excerpt from my science fiction supernatural thriller, The Contingency Generation.

My shoes fail to cushion my feet from the impact of the stony walkway we’ve been on for barely a mile. I’m grateful when Flash stops to adjust his backpack so I can loosen them. They’re a lousy choice for anything but office wear. Not that I had a choice about today’s journey.

“So what’s it like?” Flash asks while rethreading his pack straps.

“Very painful.” I rub my instep through my sock.

“Yah. That’s what I thought. Makes me wonder if we should even be trying.” He slips his pack back on and resumes his trek

Walking to the school was Flash’s idea. However, I’m just as willing to wait in the van for Fol’s back-up plan to kick in. I’m certain his tunnel design includes an alternate power supply.

I take off my right shoe and try to stretch out the tongue. I hope Flash knows how to use the autopilot features on the remote. Then when the power comes back, our van will arrive  before we’ve reached the school.

“I’ll do whatever you think is best.” I call ahead to Flash and try to walk on the outside edge of my shoe.

“Whoa.” He stops abruptly, and turns to face me, holding his hands up in an exaggerated gesture. “It’s not up to me. You’re the one who did the research.”

“Of course I did the research, but I relied primarily on the reports of experts. I didn’t test on my own.” Why are you trying to make me feel guilty? Two days ago on the morning before I was poisoned, the thought never occurred to me that I should wear hiking boots to work.

Flash continues his rant. “What kind of a researcher does that? Expert testing or not, you have a responsibility. Maybe pain is a signal that we’re not supposed to be on this path.”

Now I’m bewildered. The man is clearly a lunatic if he’s going to keep fussing about my shoes. “Aren’t you hearing me? I just said I’d do whatever you think is best. If you think it’s better for us to wait, then I’ll wait. I’m fine with letting you choose.”

“Nah. Destiny is your thing. You’d always regret not taking it and controlling it. Even if the process hurts, you’re convinced it’s for the best. Who am I to persuade you otherwise? I’m no brainiac. I’m just a transfer agent who shuffles things about. You, on the other hand—

“We hardly know each other.” I interrupt coldly. “I’m really not so committed to controlling fate as you seem to think. Especially if it involves excruciating pain. I’m human, after all. There’s a limit.” I chop at the air with my words, matching my frustration.

He is silent, so I take a breath and begin again, trying to speak with less emotion since he’s obviously irrational. “I’m actually perfectly okay with waiting for a while.”

“So, the process is painful to you?” Flash looks as if he’s uncovered a mystery.
“ Yes. Of course. Isn’t that obvious?” What’s wrong with him? Are Ancients always this dense?

“No. It’s not obvious. Since I’m not a scientist, I’ve no idea how the resurrection process is supposed to feel to the candidate or the doctor administering the process.”

A light comes on, and it’s not in the tunnel.

“We’re not talking about my shoes. Are we?” I stop to wait for clarity to sink in.

Flash roars with laughter. He stomps about, snorting, and points to my feet with the light baton.“Your feet? No. I’m talking about resurrection. Not your foot problems.”

I laugh at the absurd misunderstanding but then begin to wonder what he would think if I tell him everything. In the past, I’ve confided in Kate about my life puzzles or tried to solve them myself, but her death and the events that have come over the last couple of months are bizarre territory. I can no longer make sense of anything.

“Do you want to keep walking?” Flash looks concerned.

“I’m not sure.” I stare into the dim tunnel.

He points to my shoes. “Take them off.”

“Nah. Not really. Leave the socks on if you want, but without the shoes, your foot will better sense the ground, and you’ll instinctively move toward the smooth areas. Sure, you’ll ruin the socks, but I’m certain we can borrow more at the school.

We decide to use the empty roadway instead of the pedestrian path. While we walk, I fill Flash’s ears with all I know. In the process, I forget my foot pains.

When I finish, and I’ve answered all his questions, he challenges me.

“Here’s an observation. When something appears to be outside the realm of ordinary life, it’s easier to believe it’s a trick or fraud than to believe that it’s true. That’s a normal reaction.”

He stops and waits for me to limp closer. “But you’re a scientist. You always look deeper. So, what would it take you to believe otherwise?”

“You mean what would it take for me to believe the messages are not a hoax?”

“Yes. Exactly. And believe me, I’m asking myself the same question.” He pauses to point the beam from the light baton as far ahead as it will reach. Up ahead is a curve.

“Gosh. It would have to be huge.” I switch my bag to my other shoulder. “First, I’d have to discover Fol is not who I think he is. Then I’d need proof that another realm exists and that I have a relative living there, and now perhaps Kate lives there too. I would also have to believe the relative lived on earth 150 years ago and is still alive today in a place called Five. I pause and then add, “Of course if all that is true, then human resurrection would be the least important thing in my day.”

Flash crosses over to walk along the opposite side of the tunnel. I follow behind, frustrated by my choice to confide in him. Ancients are known to dabble in outlandish contemplations.

He continues. “Just for options sake, what if evidence proving the messages are factual is delayed? Could you even agree in the possibility that Five is a real place? After all, there are many things in science that were predicted to be true but at the time, evidence proving the fact was still years away.”

“You’re right, but there’re also some things that turned out wrong.”

“Okay. So, now I’m wondering how you, as a scientist, decide which possibilities to accept and which to reject?”

“Logic, I guess. Some things are just illogical.”

“So, based on your logic, you decide what is possible.”

“Everyone does that.” I’m no different Ancient man!

He turns to face me now, walking backward as skillfully as a teenage boy. “But what if there’s a logic that’s higher than what you can conceive? Isn’t it a bit childish to make your own logic the basis for your acceptance of a possibility? For instance, a child’s logic about the world comes from his growing knowledge of the world, which is constantly evolving. So, in the beginning of his life, a child does not even know what a parent is, yet parents are very much there in his life and affecting his life. But in an infant’s mind, the parent—as we know the parent—does not exist to the baby within his own logic.”

“I guess when you put it like that, I must agree. A logic higher than human logic could exist. But without proof, I just can’t see—I pause, because we’ve rounded the tunnel corner.

About eight hundred feet in front of us, a building façade protrudes out from the tunnel wall. The tunnel span is much wider now to accommodate the structure and traffic route. An illuminated sign across the top reads, L’Ecole De Transformation.