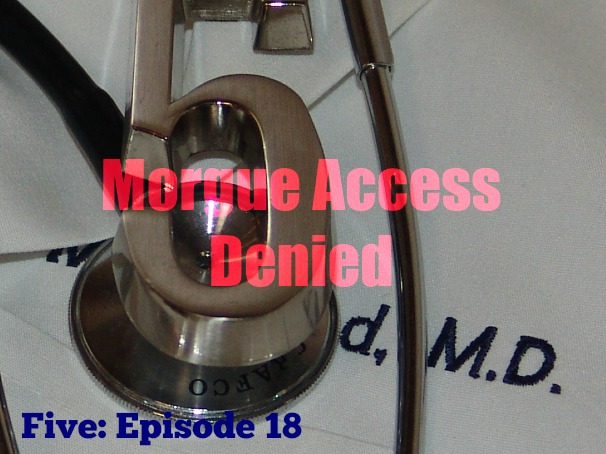 Five: Episode Eighteen is based off the following book excerpt from my science fiction supernatural thriller, The Contingency Generation.

I pace circles around Josiah’s Formula for Life statue and pretend I’m studying the artistry of the bronze ten-foot tall professor dressed in a lab coat, holding a book under one arm and pointing ahead with the other. Erected years ago to honor the professors who discovered the life formula, I feel as if his gesture today is a secret sign pointing me to the Abide where Kate’s body is stored. If she’s really dead.

My work keeps me on the active side of science. The Abide is the home of the dead. A majestic lobby designed for the comfort of those who grieve and wait for my work to succeed. Countless cylinder vaults containing the bodies of those selected are monitored for various factors twice daily. Optimal conditions increase our team’s chance for a resurrection success.

A swarm of interns move past me, dressed in the standard blues of Triump, also known as the Testing & Research Interns Under Medical Programs. I wonder if they call the statue by his nickname. A cursory assessment of the clustering clinicians leaves me feeling that they do not really care. I feel like an alien.

The statue has been my sentinel and guide. The commissioning of it happened during my pathology study days. Long hours digging into cadavers led me to discover my passion for regeneration. Shortly after the statue’s unveiling, our class carried out protests at his feet. The dogged professor stood right along with us. We nick named him “Professor Tom-tom”, because his presence rallied in us a unity not unlike how villagers might respond to an old chieftain’s drum.

Our collective voice finally persuaded the world science community to push for greater academic focus and standards in the field of regeneration. Then the century-old Melee Morgue was renovated into the Institute of Tissue Recovery and Implantation and “Professor Tom-tom” was moved to this central location. The institute now houses the largest body of medical research groups in the world.

I turn to see a young girl playing dress up in a security uniform. If she’s even double her apparent age of twelve, then I stand to be an easy sixty-four. I play along. “Do I have clearance?”

Girl Agent looks anxious. “It seems there’s a problem.” She looks down at her wristlet screen and twists a wavy blonde hair lock that has escaped her olive beret.

“What kind of a problem.” I know my tone is fierce, but I’m tired of waiting.

“Records protocol restricts vault visits to designated kin only. Your departmental At Will clearance has not been activated. If you’d like to set up an appointment for a future visit, I can ask—

“But I AM  her designated kin. I’m here in that capacity. I’m not making a department request.”

Girl Agent looks surprised. “You’re the designated kin of …” Her voice drops off as she trails her finger across her screen and reads, “Kate Auburn Bigsby?”

“Yes. I told you that detail twenty minutes ago.” I step forward and hold out my screen to show the confirmation. “Here’s my kinship confirmation.”

She backs away as if I’ve begun hemorrhaging. “I’m sorry, I have to see confirmation from our system, and right now it shows a designated kin by another name.”

“Whose name?” I try to lighten my voice, but my limited patience weighs more.

“I’m sorry. I’m not at liberty to reveal that. You’re welcome to communicate with security on level two and see if there’s been a mistake.” Girl Agent uses her best rules and regulations voice.

“Of course there’s a mistake. I’m Kate’s only kin. Your system is as bungling as you are.” Damaging my chances entirely, I rant at the wide-eyed doe standing before me.

“Stop saying that. If you were sorry, then you’d clear me to visit my dearest friend’s vault.”

An alarm tone comes from Girl Agent’s belt. She switches it off. She’s obviously torn between the duty of the call or aggravating me some more.

“Go.” I bark the command, and she practically jumps to salute me.

I soften. “Go do your security stuff. I’m really only a harmless woman wanting to visit a dead friend, but I’m also hungry. Our little chitchat has managed to consume most of my lunch break. Let’s call it a truce. I’ll grab a sandwich and you run away.

Girl Agent looks dubious, so I take off towards the café but turn around after a few steps to shoo her encouragingly away. The trick works, because when I look back again, I see her weaving between throngs of interns. She heads to the north exit. If I’m lucky, our paths won’t cross again.

My route is south and down to the sublevel. I’ll follow the intricate labyrinth I remember from college days and enter the Abide under cover of a uniform, a detail that requires a first stop at laundry.

Is Kate dead or alive?  I’ll find out the truth no matter who tries to stop me.