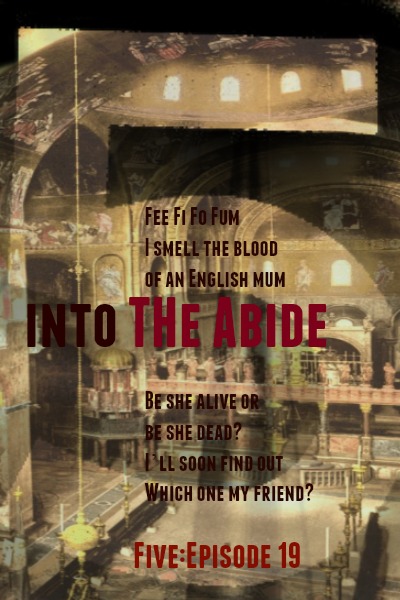 Five: Episode Nineteen is based off the following book excerpt from my science fiction supernatural thriller, The Contingency Generation.

My laundry raid turns out better than I expect. I find an Abide worker’s lab coat by a deserted steam press and attach my badge to face the pocket. Maybe I’ll remain unidentified long enough to determine if Kate’s body is inside.

Navigating the sublevel thru many twists and turns leads me deep into the heart of the building. I’m relieved when I see an Abide logo on the wall. My destination is close.

The emblem, composed of three flames and three circles with overlapping boundaries, speaks of the hope our generation holds for resurrecting our dead. It will be our greatest accomplishment and gift to mankind.

Kate always said that no one really wants to die, but sometimes people think they do because their life becomes too painful to live.

Lately, the occurrence of death is on an upward trend. A large number are due to the increase in natural disasters. Then there is the combined impact of those opting for medically assisted suicide because of the rising number of cases of the Bonemic plague, which remains incurable. Before these events, everyone thought world wars would be the cause of mass dying, but the work of Universe United brought all world sectors together and streamlined distribution of products and fuel, which allowed for a greater opportunity for peace.

However, if nothing changes, the extinction of human life is certain. The rising death rate coupled with the decreasing birth rate will ensure it.

The demand for children is less. Fewer people want to invest time in understanding and maintaining the strict regulations regarding the raising of children. For the most part, Child Development Schools take care of the process, and thanks to the advances of genetic conception and design, male and female partnerships are unnecessary. Surrogate mothers are tired of seclusion and decreased wages. They’ve found better and less risky ways to make a living.

We are in a race against time.

Vast space exploration still hasn’t revealed another planet containing human life. Earth is our only cradle, and the Abide holds extinguished reflections of it’s nurture. Our future lies in the vaults behind its massive doors.

I reach the entrance along with a cluster of Triump interns. I’m about to push inside when a chime sounds from my wrist screen, so I step aside to let the interns pass.

My screen shows another message has been received from Five. Fol programmed the alerts to trigger off the DS device he gave me.

I shut off the chiming. I can’t afford the special attention the noise will bring inside the Abide. Besides, I no longer care to follow the messages. I’ve concluded Fol is right. The messages are an elaborate prank. The three I’ve received have a logical explanation. The mentality of people who would believe the messages is probably due to the psychological stress we all feel over the possible extinction of human life. Message recipients and hoax creators alike, both hunger for an afterlife or at least MORE of this life.

My job is to find a way to give it to them.

I push through the doors.