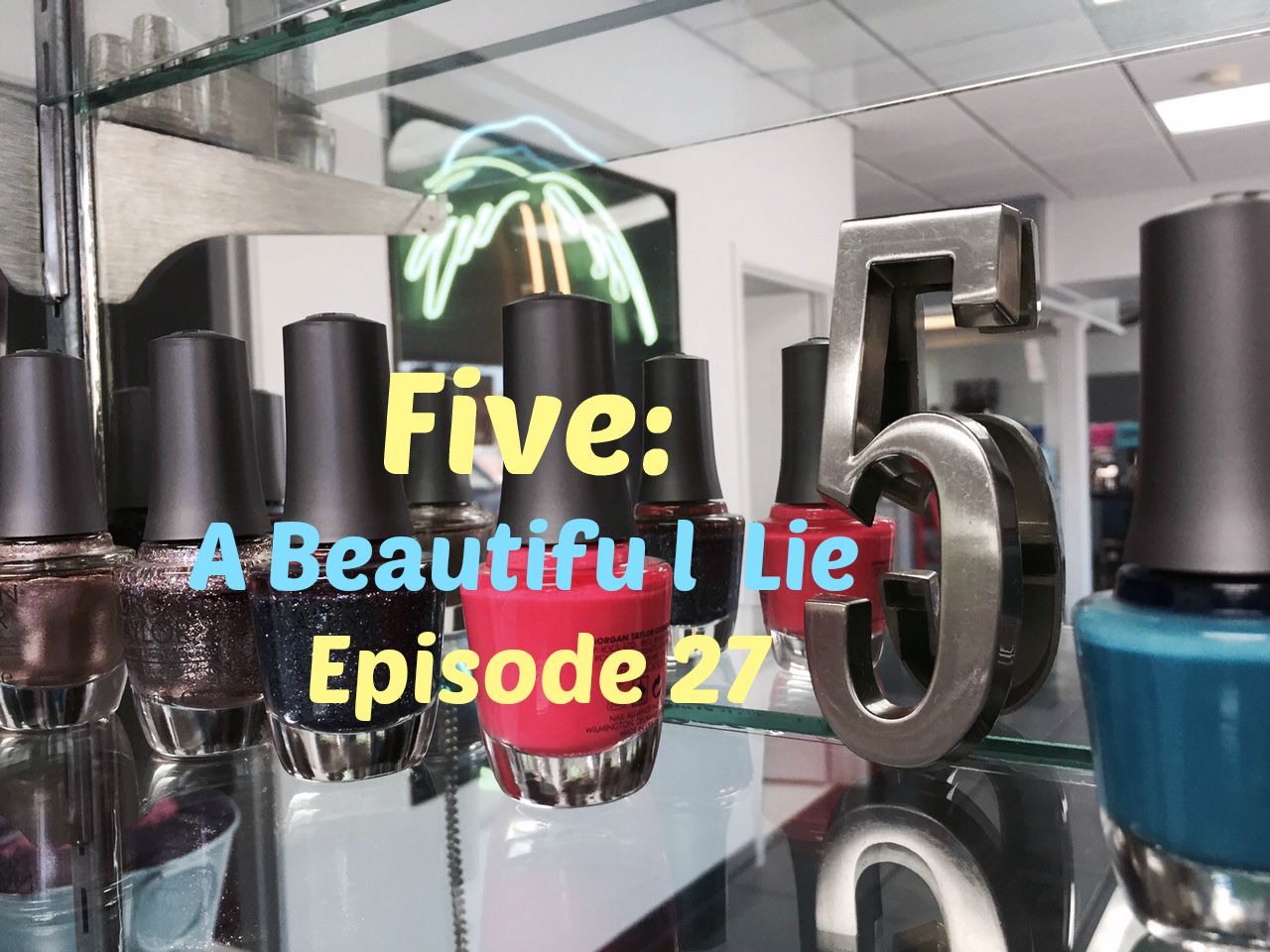 Five: Episode Twenty-Seven is based off the following book excerpt from my science fiction supernatural thriller, The Contingency Generation.

Fol finds Baphomet at the spa. She sits on one side of a couch beside her sleeping proselyte and looks at a fashion magazine. Her convert, an auburn haired model in her late twenties, is stretched out beside her. The scene reflects an image of best friends, but Fol knows the woman is in a drugged stupor and the temptress who lured her there is Baphomet.

Inflicting punishment is all he cares about.

In anticipation, Fol exhales sharply, and the air current around him recoils creating a vacuum that allows the unbolted sauna door to swing fully open.

At the sound, Baphomet comes alive. She sprints to the sauna and closes the door.

Fol laughs. “Really, dear? You would hide in the there?”

“The deception was Lucifer’s doing.” Her voice reverberates all around him. “He says you’re misguided and must be stopped. I see his point now. Resurrection is uncharted territory. Soul oppression and possession are our proven strength.”

Fol levitates a shelf full of nail polish bottles and hurls it against the door. Dripping color christens the frame. In rapid succession, three more glass shelves of beauty products crash onto the floor. The splintering glass punctuates his roaring. “YOU WILL DO AS I COMMAND!”

He reaches for the sauna control knob but his touch evokes arcing electricity. Tongues of fire erupt and lap at the wood paneling. They die down when he withdraws his hand. Destruction usually satisfies him, but today he needs more. Baph will not come out alive. Her defiance requires this, and unlike him, her mortality is a fragile boundary.

He seizes a lounge chair and orbits it into a massage room where it crumples against the wall, caving in a head size hole.

The lethargic woman on the couch moves and mumbles.

He shifts his focus to her and his eyes rim with fire. She will pay, too. In a sudden swoop, he jerks up the couch by one end and topples the woman onto the floor. She wakes, half crazed, and reaches for his hand to help her up. He laughs as he touches her, knowing the contact will burn. She winces and cries out, “Why are you hurting me?”

“Leave her be, Fol. You have no right to her!” Baph now speaks from behind him.

He whirls around and lunges to seize her, but instead finds himself thrown back to the wall. Her shield is impenetrable. She holds the book.

“Damn you, Baph. Why did you lure SJ with Kate?”

“To prove my point. A beautiful lie is what manipulates. SJ left her work to follow a lie.” Baphomet looks down and caresses the book. “Mortar’s words with a twist. It worked at the beginning of time, and it will be our success at the end. Your displays of force and power only create fear. Fear is what sends them back to Mortar.”

“To them, the book is long gone. It no longer relates.”

“You forget dear brother, they are wired for his words. Even when his words are no longer near, they hear the echoes in their world he created. Besides, now they’re hearing them again in messages from Five.”

Fol holds out his hand. “Give it to me.”

Baphomet steps back and shakes her head. “You’ll only destroy it. Then we’ll not be able to twist the truth, which we must be do with relentless resolve and ever so slightly to make them believe our words instead of Mortar. Father predicted your impulsive rage would doom our success if it remains uncurbed. I’ll not party with your childish need for power.”

Fol goes berserk. He tantrums all around Baphomet, unleashing his worst on the salon. The woman crawls into a corner and huddles in a fetal position covering her head while around her every nuance of beauty treatment is reduced to wreckage. Clutching the book, Baphomet holds her stance and remains unscathed.

Finally, in a false appeal to her mercy, Fol collapses at her feet, grips her ankles and sobs, “Please Baph. I need this. You’ll see. SJ will raise the body, and the Beast of the past will come alive. All will be astounded and then easily led.”

Baphoment bends over, pulls away his slackened grip, and lifts his chin with one finger. He sees his prize, the book against her heart, now melded together with her hand and arm. Attacking her is of no use now.

Her voice speaks soft as a child. “Mortar will never allow it. His breath alone gives life.”

Fol stumbles to a standing position. The book’s presence affects his balance. “How do we know that’s true? Maybe life is not singularly evoked by his power.” He brushes glass shards off his suit and tugs at the tattered hem of his jacket. “Mortar declared earth to be OUR kingdom.”

He straightens his lapels and finger combs his hair, ducking to catch his reflection in piece of mirror still attached to the wall. “We’ll never know unless we try. Science has advanced to this place, and humanity is ready to receive it. The timing couldn’t be more perfect.”

“And if the resurrection fails or the ruse is discovered?” Baph asks the words while extending a hand to the trembling model who sees only a drug-induced nightmare.

“It will not be discovered, dear. I know how to tell the beautiful lie as well. Besides, who would disclose the truth? Sj would be considered a lunatic and no one from our team would sacrifice the progress of our company. I built DCN to give us a place of visibility in preparation for the Conquering. Tainting our company’s reputation will affect our alliances and push all our strategy back to the dark ages.”

Baph rights a toppled chair and gestures for the woman to sit. Hesitant, she approaches, and Baph picks up a shawl from the floor and wraps it around the pitiful figure. Then Baph steps over piles of wreckage to fill a cup with water at a broken sink. She offers the refreshment to her convert and the woman gulps and watches Fol with wary eyes. When the woman finishes drinking, Baphomet takes the cup and rests it on the upended couch. Then she hands the woman an eye mask and reclines her chair, while soothing her protests. “Sleep. You’re having a dream.”

Fol watches the skilful persuasion unfold. Baphomet is undoubtedly a master at convincing. He needs her help and commanding it from her never works.

“Baph you have a place in the kingdom. All that is beautiful will be under your direction. Think about it. Upon father’s resurrection, the Conquering will be certain.”

Baphomet steps into an adjacent treatment room out of the woman’s earshot and Fol follows. Her voice is firm. “I disagree. Resurrection is a gamble that’s unnecessary and only feeds your pride. Why must you keep grasping for the freewill choice of a human? Without use of oppression or possession, it’s risky business.”

“Mortar does it. They freely choose him. Our side is equally capable.”
“You’re too proud. You loathe human freewill, but you still want them to choose us without applying influence. Can’t you see that without our manipulation, freewill repeatedly rises to block our Conquering?”

“Why is my desire to have them freely choose our path such an impossibility in your mind?”

“Because of Mortar’s words. Because of this.” Baphomet separates the book from her chest and holds it out ever so slightly. “Our words alone, without combining a distortion of his words, do not compel. His words are unmatched.”

“That may be true for the past. But now, by my hand and using SJ, resurrection will convince the world to adopt our ways without ever again reflecting on his. Our kingdom will surpass Mortar’s.”

Baphomet seems to regard his proposal.