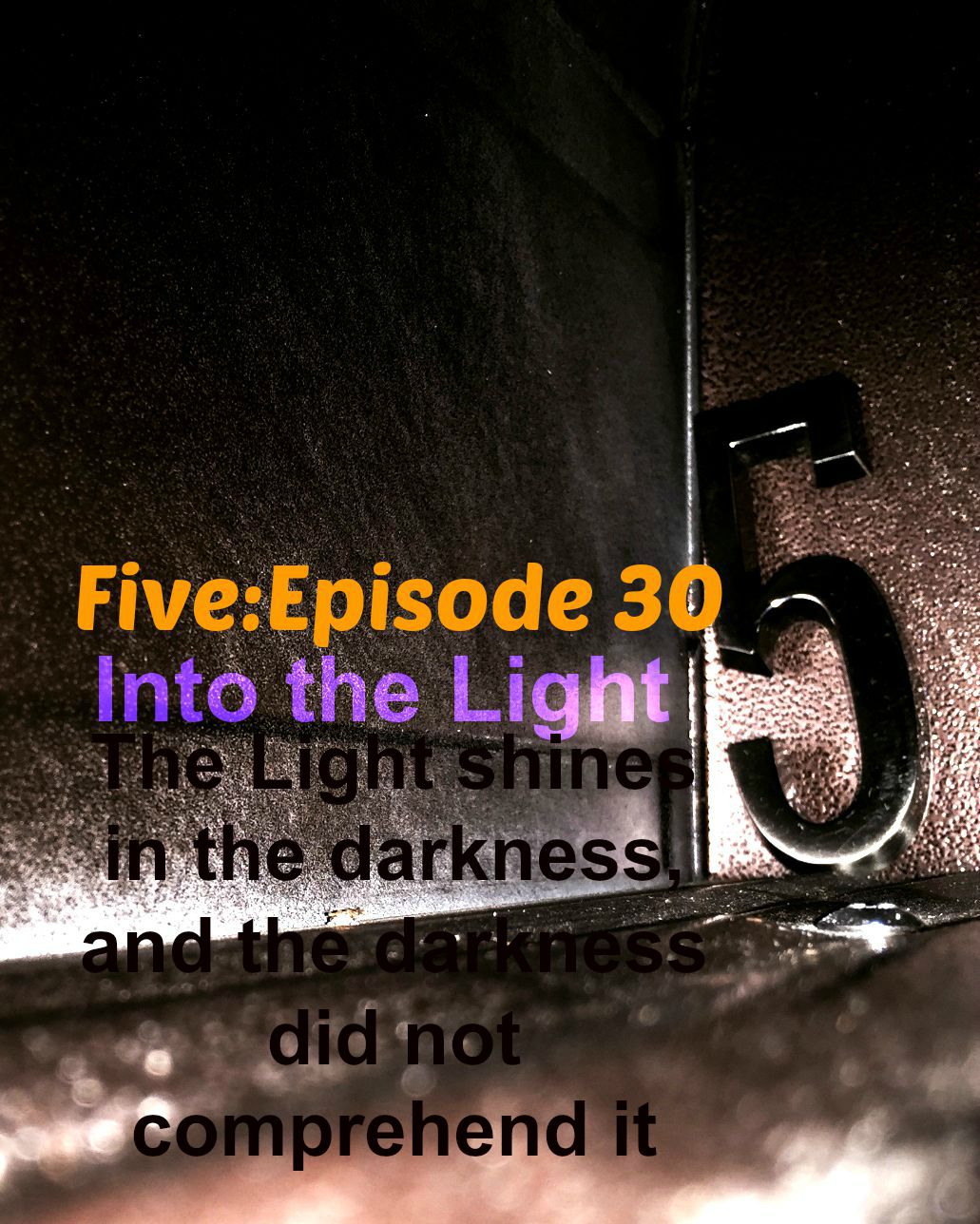 Five: Episode Thirty is based off the following book excerpt from my science fiction supernatural thriller, The Contingency Generation.

We take the main tunnel on our way to the dwelling section. I feel like a pawn being pushed into play. My choice to search for Kate’s body is what began the chaos. Whoever drugged me doesn’t want me to succeed. But why and in which effort? Finding Kate or accomplishing resurrection? I’m still fuzzy about it all. Dr. Morbeed insisted clarity would come sooner if I stay relaxed, but being under mountains of rock and dirt isn’t helping. My life alert stats on the tell-all passenger screen confirm my vital signs are climbing into the caution range.

Lack of contact with my team makes me certain that waiting in SHEOL for Fol’s return is a bad idea. As bad as trying to live without the sun.

“How do people stand it?” I ask for diversion.

“SHEOL workers are used to it.” Baphomet switches the map to menu selections on the car’s center console screen,

“Aren’t they endangering their life quality?”

“Relying on the sun has long been unnecessary. One of the many reasons Fol built SHEOL is to prove this over time. Everything needed to sustain a good life here is just a matter of technology.”

She points to a list of musical selections. “Should I play something?”

I nod approval, hoping to ward off the looming insanity of my situation.

As music fills the interior, Baph explains how it synchronizes with periodic receptors in the tunnel, which trigger specific displays of virtual outdoor scenery.

Soon after this, sporadic tunnel walls transform into famous scenic byways, but I still can’t give in to a complete mental escape, because apart from these illuminating vistas, all that brightens the tunnel corridors is the subdued dusk-like glow from ceiling light strips. Even worse, there are places where those lights are burned out entirely, and the tunnel remains exactly as expected, a pitch-dark cave. Since our car navigates by autopilot, the darkness does not hinder driving, but to ride in such a long absence of light bothers the heck out of me.

A few minutes later, the music crackles into jarring sound and my senses are disrupted further.  Baph taps the console screen and fiddles with the signal receiver, but it does not help. The static muffles into a rhythmic pattern like that of cresting ocean waves. An intermittent dull-noted chime, indicating my blood pressure is up again soon rises above the waves.

“I’ve got to get out of here.” I say the words as calmly as possible.

“What?” Baph turns down the static.

“I’ve got to get back to my team. I don’t care who’s sabotaged the project. I’m the leader, and it’s up to me to get the Resurrection Project back on track.” I press “brake” on my passenger control console. It works. The car decelerates.

Baph calmly shuts off my control access and hits accelerate. “It’s obvious you’re suffering residual trauma from the poisoning, which makes you more sensitive to a condition in SHEOL known as Sun Dep D. It’s a depressive affect and triggers sudden emotions, and irrational judgment. Your sensitivity factor is probably off the charts. As soon as we get to the dwellings, we’ll turn the sun lights on to high. You’ll feel better in no time.”

I’ve never resorted to physical force against another human being in my life, but when I look at the petite frame of the Heshee in control of our route, I wonder about my options. My heart races parallel to my fears. Why is she being so stubborn?

I try reasoning again.“There’s nothing wrong with me. I just have to get back. If you can’t bring me to the surface, then drop me off and I’ll find another way.”

She mechanically repeats, “You’ll feel better in no time.”

Two chime alerts, both accompanied by graph charts, now signal that my heart rate and blood pressure are still escalating. The dumb warning makes everything worse. I bang on the screen. “Doesn’t the idiot thing shut off?”

Baph doesn’t respond. Although the car requires no steering, her eyes remain fixed ahead.

“Look, Baph. Just get me to an exit. There has to be one near here for emergency measures.” I plead, trying to keep panic out of my voice .

Baph gives me a studied glance. “I’ll take you to the dwelling area. Fol expects that. Once you’re there, everything will seem more natural.” Her voice reflects the tone a mother would use to soothe a distraught child.

“I can’t imagine that.” My heart sinks at the thought of what I’m about to do. I grip the door handle. She has to be convinced that I’d do it, but the speed  of the Morenci is an intimidating factor.

At that moment, something flashes by my window. “Wait! Slow down. There’s a sign.”

Baph turns up the music and crackling sounds roar from the speakers.

“I just saw a sign.” I yell at her. Before she can respond, I switch my passenger screen console to map mode, trace our route, and tap on a mini book emblem, the universal symbol for school, and see the words “L’ Ecole De Transformation” pop up.

The static sounds drop to a hush, because map mode overrides sound settings. “Drop me off there.”