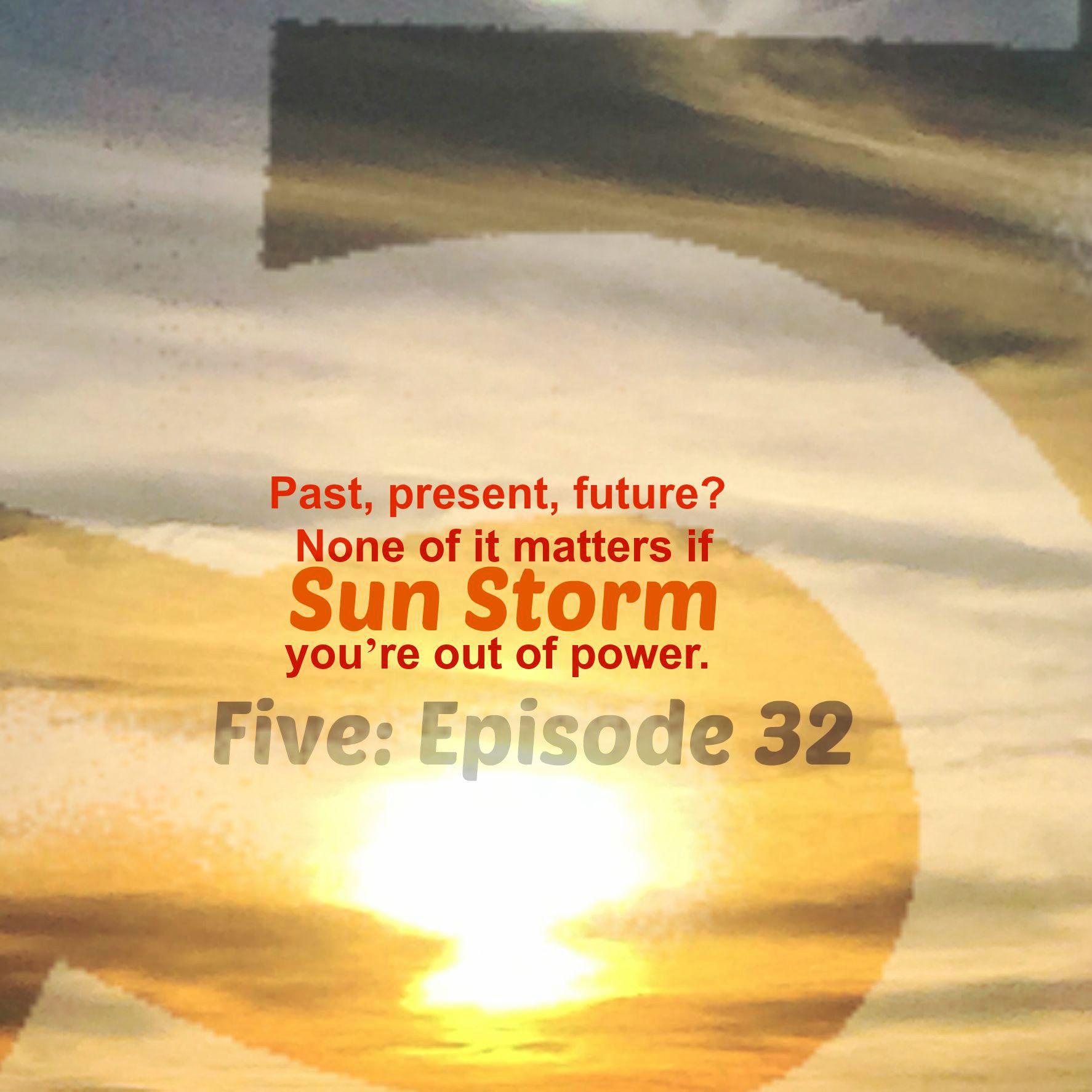 Five: Episode Thirty-two is based off the following book excerpt from my science fiction supernatural thriller, The Contingency Generation.

“SJ, please. This is crazy. You’ve no idea who the driver is.” Baphomet follows behind me in the tunnel.

I take the pedestrian sidewalk in the direction of the headlights. Her concern sounds genuine, which is why I feel guilty. I’ve grown to like Fol’s Heshee sibling, even though there is an odd power play that exists between them. He may well rule over her and his company, but I’m the one in charge of the Resurrection Project.

When the vehicle gets closer, I see that it’s a DCN van. Now what? Hitching a ride with a worker from Fol’s company may be safest, but it could put me right back under his attempt to dominate the situation.

The van stops and a figure steps out. Glare from the headlights makes the face difficult to see. I’m cautious but become less wary when I recognize the driver. It’s Flash, and he looks as if he’s been rolling in mud.

“Are you ladies having car trouble?” Flash removes his cap and pats down his unruly hair.

“Nope. Just a change of plans.” I look back at Baphomet who shrugs off the “ladies” reference. Flash has probably never encountered a genetically designed 3rd species Heshee.

“Okay. I’m good for a ride. Who’s going where?” Flash situates his cap back on his head.

“Me. I’m looking for a lift to the school. Any chance you can take me there?” Does he recognize me?

“Will the sun rise every morning?” Flash’s leathery face crinkles into a wide smile, and he begins to swat caked mud off his pants. “Pardon my dust.”

The first time I saw Flash was when he was in Kate’s apartment, and he appeared on my media wall. Now, in person, he’s unmistakable. He’s one of the few Ancients I know.

Baph takes back my flare and asks, “Do the two of you know each other?”

“Flash is the transfer agent who took care of Kate’s things after she died.”

As if on cue, Flash makes matters worse by breaking into an odd sort of jig, which involves stomping his boots to jar off the dirt clods. He stops when he notices our focus. “I be ready whenever you are.” He gets back into the van.

I turn to Baph. “Believe me. He might seem peculiar, but he’s harmless.”

She still looks unhappy. “Are you sure you want to do this?”

“I’ll be fine. I know Fol’s trying to protect me, but waiting in SHEOL does not seem to be the best way to get to the truth.”

I leave her and climb into the front passenger seat.

Baph’s child-sized Heshee frame, illuminated in the headlights, seems vulnerable in contrast with the vast darkness of the tunnel. I resolve to inform Fol of my decision to return to The Abide as soon as possible. He should not expect our relationship to include letting Baph manipulate me.

The red Morenci takes off, and in seconds, Baph’s taillights are a distant glimmer. Then they disappear altogether. The clunky DCN van moves on autopilot at a much slower rate.

“So, what’s the good doctor doing a jillion miles from her den in this underground noodle bowl?” Flash speaks while adjusting the controls.

He does remember me. I decide to dive in. “I was taken to Kerioth Medical after a poisoning attempt.”

“When did this happen?” His expression is serious.

“Don’t you watch the news?” Surely, the sabotage events are public knowledge.

“I do. All the time.” He selects “media” on the console screen, but nothing displays. “Except of course when I’m working underground or a solar hatch puts a wrap on it. Like today.” He points to the panel where an illuminated sun storm warning appears.

I squint to read the small ranking number under the warning. “An X55? It must be a mess out there!”

“Yep. Last week everything went down in Sector 22 where I’ve been manning the buses until the relocation effort is done. Some believe the power interference is not solar related but a deliberate act of the protestors. It’s put a halt on all sector transfers, and that gave me a break to run a pick-up at the school. After a known sympathizer left without taking their belongings, Global Safety requested it.”

“Why isn’t someone concerned with locating the missing sympathizer?”

“I don’t know. I wondered the same thing, but lately the G. S. seems more interested in finding a connection that links the hoax messages arriving from Five to the disgruntled activists.”

I nod. “It’s unity first. The motto we cut our teeth on. Individuals respond unpredictably when fear of the unknown rises. If a logical explanation can be found, then G.S. will pursue it to ensure unity.”

“Do you believe that? Flash presses me. “Does having an answer for everything make people happy and more peaceful?”