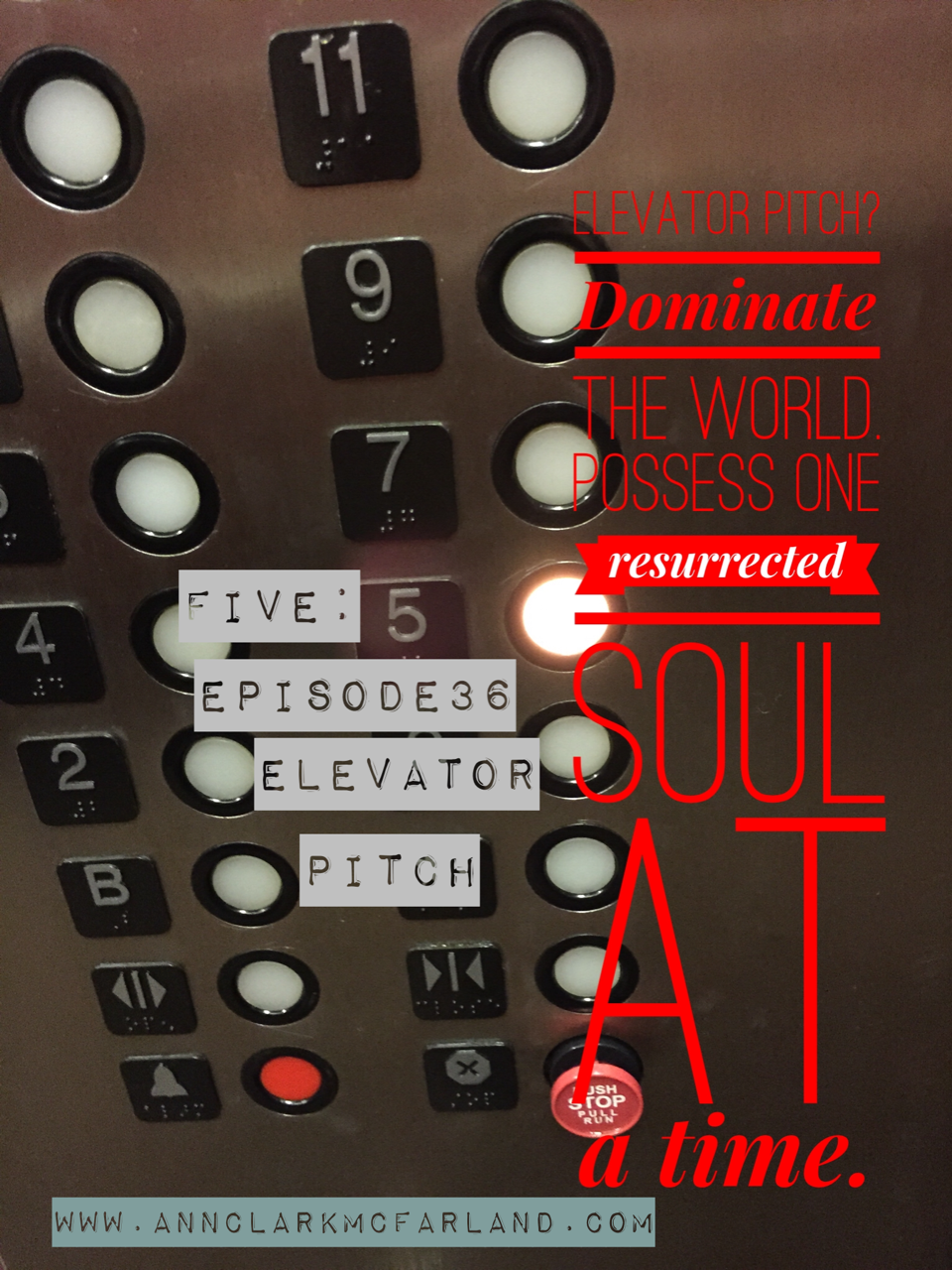 Five: Episode Thirty-six is based off the following book excerpt from my science fiction supernatural thriller, The Contingency Generation.

In seven days, the world will bow. The arena must be flawless. Fol practically sprints to the elevator in his excitement of the thought.

“Going up, sir?” The young man holding the door somehow reminds him of Michael when they first met in the heavenlies.

The memory no longer pains him. Michael made his choice, and Fol gave up grieving for what is long past. Establishing his kingdom on earth is all that matters. “No. Base level, please.”

The doors close and Fol notices the man smells of Mortar. The scent always makes him sick and quickens the human heart in him. It also spurs a desire to play comrade. Once befriended, he scavenges a human life for specific weakness and makes ready a path for a Designer Oppressor to take over.

Oppression is most fun because of the challenge. Getting one of Mortar’s dogs to become useless requires elite skill. Even though human ignorance of the heavenlies is to his advantage, Fol misses the more prolific occasions for oppression that previous centuries offered. When access to The Book of Wisdom was readily available, the challenge to oppress Mortar’s kingdom was everywhere. But now, with almost complete ignorance of Mortar’s existence, only the mundane opportunity for possession, a lesser and more tiresome feat, remains.

It’s such stupid work. Even a cretin knows how to do it.

First, you watch for signs of a man’s life-killing habit. Then appeal to his pride and swill him with upbeat notions about his detrimental inclination. All are lies of course but so beautifully constructed. If spun correctly, the whole thing soon becomes too much and the poor sot doesn’t know what’s up or down. Keeping truth at bay is the tricky part. So the man must be surrounded by bad company. Soon the beleaguered oaf wants to end it all, and that’s when the possession whisper must come. It’s important to get there first before Mortar’s whisper prevails.

Possession is very tedious and involves playing to a human’s basic stupidity. Oppression is far more fun, because it involves derailing spiritual inclination and uses advanced skills. Much lying and appealing to pride, disguised as good, is required. The outcome of oppression is usually less physically dramatic than complete possessed depravity, but the spiritual effect can be more sinister. Seeing one of Mortar’s own, rendered broken and inoperative, is quite fascinating, and the rippled pattern of confusion it disperses over others, both Mortar’s and the Unclaimed, is exquisite. How can a man or woman be enticed by Mortar’s offer when they see the hypocrisy of one of his followers?

Regrettably, neither a possession nor an oppression spree is worth Fol’s detour today. Today, his time tick-tocks for only one thing.

Making life is out of his power, but reviving a life once dead is in his grasp, or at least in SJ’s hands, and SJ is his.

He’ll soon reunite with SJ at the dwellings, and he’ll spare no method to convince her of his love. Drugging her was an insane act to gain control, and he must not cave to such an impulse ever again. Nevertheless, thanks to Baphomet’s touches and SJ’s own pride, she believes him innocent of the act and thinks that his concern for her life is genuine.

Believing is what SJ does best. Thankfully, her belief requires evidence that she approves of, so it’s really quite simple to keep her under his thumb. If SJ approves the evidence that appears to explain how something works or exists, then SJ believes it’s truth and will not look any further into the matter. Her scientific mind resists assigning truth to anything unproven. So keeping her in control is all about appearances.

The resurrection must appear normal. Unknown to SJ, her success in getting the physical body to resurrect means a spirit must reconnect. That’s how Mortar made life, and Mortar’s folly provides for Father’s opportunity.

Father will take form on earth again by his repossession of “The Beast,” the first man destined to be medically resurrected. Beast’s spirit may attempt to re-enter in the original weakling form that he held, but Father’s initial possession of him occurred so early in Beast’s depraved life that little is likely to remain of his Mortar-made spirit.

Still, if there is any advancement in Beast’s spirit, acquired since his passing, the effects will be overcome by Father’s strength. It’s highly unlikely that Beast made Mortar his choice before he died, although humans have the option to choose Mortar until death is accomplished. If Beast did chose Mortar in his last breath, then his heavenly trappings from life on Five will not be sustained in the decay atmosphere Mortar allows on earth.

SJ must not perceive any of this scuffle, which should be easy to obscure since SJ has no belief in Mortar or spirits or the heavenlies. Just in case, Baphomet will be kept close, as she has the greatest skill with tricking perception. All the world will see the resurrection happen, but the entire world, including SJ, must remain unaware of the spirit re-possession attempt.

It will be easy, as always, to dazzle with the physical accomplishment alone. Even if SJ observes something of the spiritual, her pride will never admit to a realm beyond what she can control. It’s all about how things appear. It’s not about how things really are.

Every detail is important in the arena setting where the greatest scientific breakthrough in history will occur. The actual presence of select notoriety and world leaders, as well as the virtual presence of the whole world must be made to feel welcome.

There is only one thing that must not be there.