Five: Episode 37 … All That Glitters 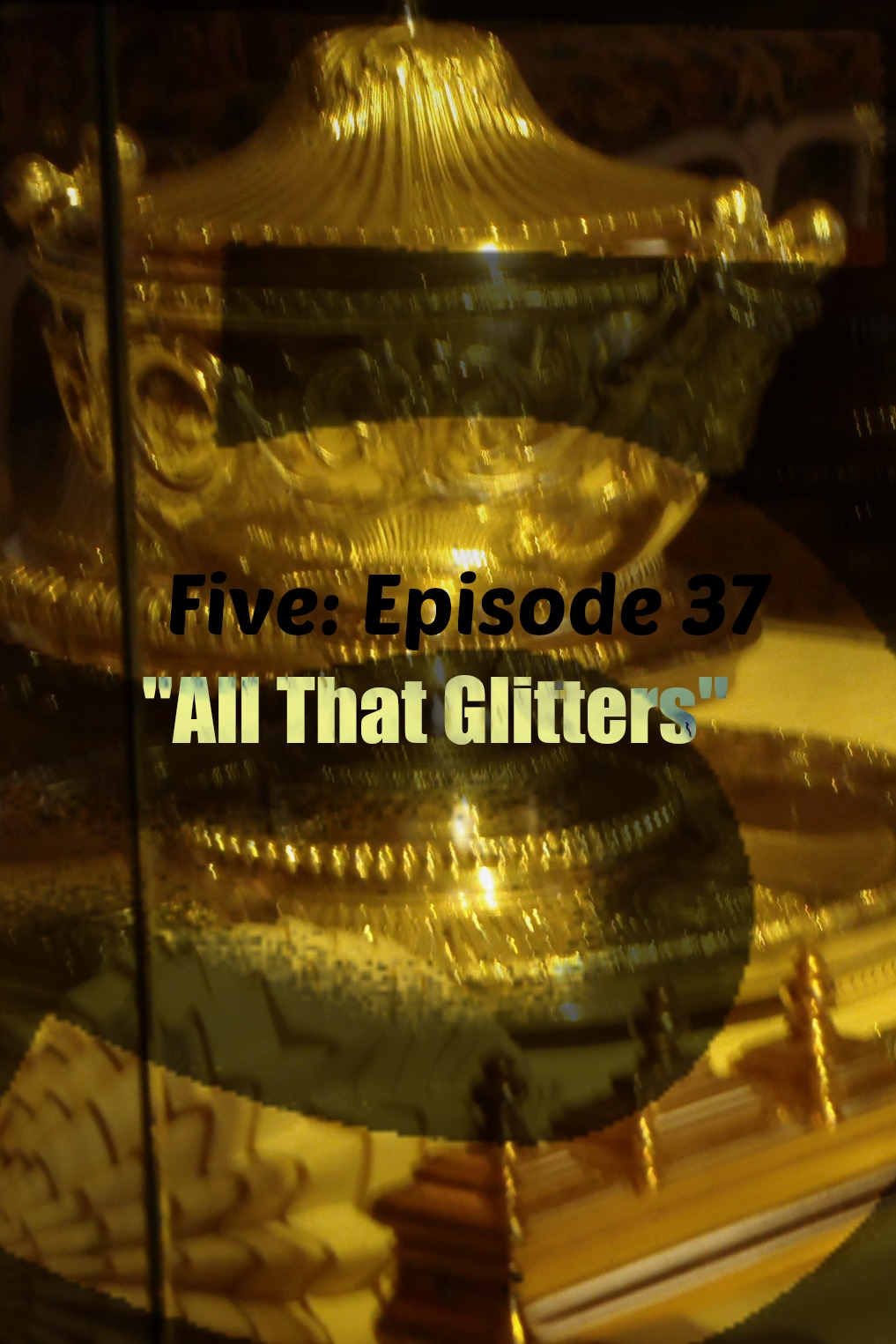 Five: Episode Thirty-seven is based off the following book excerpt from my science fiction supernatural thriller, The Contingency Generation.

Loki ushers him in. He gives Fol a kiss on both cheeks, which Fol allows because his designing friend performs best when his “aura” is replete with the niceties of human expression. Without such pretense, Loki is prone to lament and wallow in self-doubt, and everyone knows a sad designer is a bad designer.

He’d much prefer to manipulate by intimidation instead of compliments, but he’s learned to spew flattery for those who’ve developed a bottomless hunger for approval, a condition caused by their underlying sense of shame or need for significance. No matter what the reason, it irritates him to be required to produce such hot air. Nothing a man ever does will compare with heavenly accomplishments.

Loki sashays away. “Come to the kitchen and meet the candidates.”

Once there, Fol takes in the pinnacle of Loki’s efforts. He’s almost awed by the design element of illustrated titanium tiles that border the kitchen surfaces. Lovely representations of woodland birds are etched in pleasing colors. The overall shimmer of silver plays well with white marble and the use of black iron.

Beside the stove, the newly hired six-member staff uniformly dressed in grey trousers and pristine white shirts wait to be introduced. Each one steps forward as Loki calls them each by name and gives a brief summary of their credentials.

“Chef Bosma.” Loki waves his hand at a portly man with thinning black hair and thick sideburns who nods his head at Fol.

“Bosma received his culinary degree at Universidad Francisco de Victoria in Madrid and worked as a line chef under Jose Adria at Rosados.”

Loki continues in typical fanfare fashion and claps his hands prior to gushing over each staff candidate’s lineage.

Fol could care less where they came from or what they’d done as long as they heed his expectations and keep watch over SJ.

When introductions are complete, Loki faces the entire group and gives his “loyalty” speech concluding with, “If you do as you’re told, then you’ll have the opportunity for many long and happy years at La Casa de Fol.

Loki winks at Fol, who offers a half smile. He longs to be rid of such grandiose attentions to these lesser imitations of life. Father’s fall from grace left him few options for a dwelling except for those built squarely in the realm of morons.

He studies the assembled. He has so much work to do, but in keeping with pretense, he must first offer a little speech of his own. However, he will not jump ahead before making some quick mental notes about their outward distinctions. It is a habit he indulges in order to determine their potential weakness. His oppressive work, which he does to simplify his ability to control a human target, involves reading human character through their actions, reactions, gestures, focus, eye movement and the like.

House manager is to be Aya, a 40ish brunette with straight chopped locks and a thin chiseled face. She does not show evidence of a partner, but beyond this, her appearance offers no clues.

Serpens, the new butler, has a calculating shifty look, which appeals. Fol is partial to habitually deceptive individuals. They are the foundational creatures he relies on to carry out his schemes. It will be nice to have at least one when pressure becomes necessary. The privately conveyed stories from Loki regarding Serpens’ effort to land a place in Fol’s ranks is certainly commendable. Serpens also shows no indication of partner entanglement.

Housekeeper, Chuldah, might be too old to keep long, but her ruddy cheeks and Scandinavian features indicate a possible trace of stoic fortitude. She wears a ring on her left hand. If she is strong willed, then her will can be shaped and become a great asset to Fol’s plans.

Karni is dark like Serpens, but aboriginal instead of Bharata. According to Loki, Karni served in Sector 22, his native birthplace, and maintained a fleet of land rovers for the King of Zulland during the Viridian uprising. He is young, passionate, and shows evidence of unquestioning obedience. His fingers are free of any bands.

With the exception of Bosma, who keeps his hands behind his back, Fol observes that only Neith and Chuldah show evidence of a partner.

Fol begins. “Your employment in this house is to care for two people, myself and my partner, SJ, a name she prefers rather than the formal address of Dr. Satan Jr. SJ will be arriving shortly with Baphomet, my heshee sibling. SJ has been through a medical trauma, incurred during a sabotage attempt on The Abide, where her research team was preparing for the first resurrection. Once SJ feels strong enough, she will resume her work, but only in the arena at SHEOL. Due to security issues, she will not be returning to The Abide. The change of location will be an adjustment, and your help in maintaining the home environment is essential to her comfort and success.”

Loki shakes his head. “Poor woman. She must be overwhelmed. Her world must be made into a dream, which is why I’ve created the Cabana room. Come. Come.”

Fol nods approval and Loki prances to the sun room with the others parading behind him.

“Voila. I set the default light balance to match Caribbean latitude at 2 pm. The windows display a beach view of Frigate Bay on St. Kitts. SJ can change the selection at any time as well as the light balance.” Loki looks immensely proud of his efforts.

Fol notices how the faux thatch ceiling hung with several bamboo fans lends consistent detail to the tropical paradise theme. The space is certain to remind SJ of their honeymoon at The Nest. Double glass doors open to a square turquoise pool, and the aviary enclosure is alive with a myriad of colorful birds flitting about in the lush greenhouse structure.

From inside, no one would ever know that the entire dwelling exists several hundred feet underground.