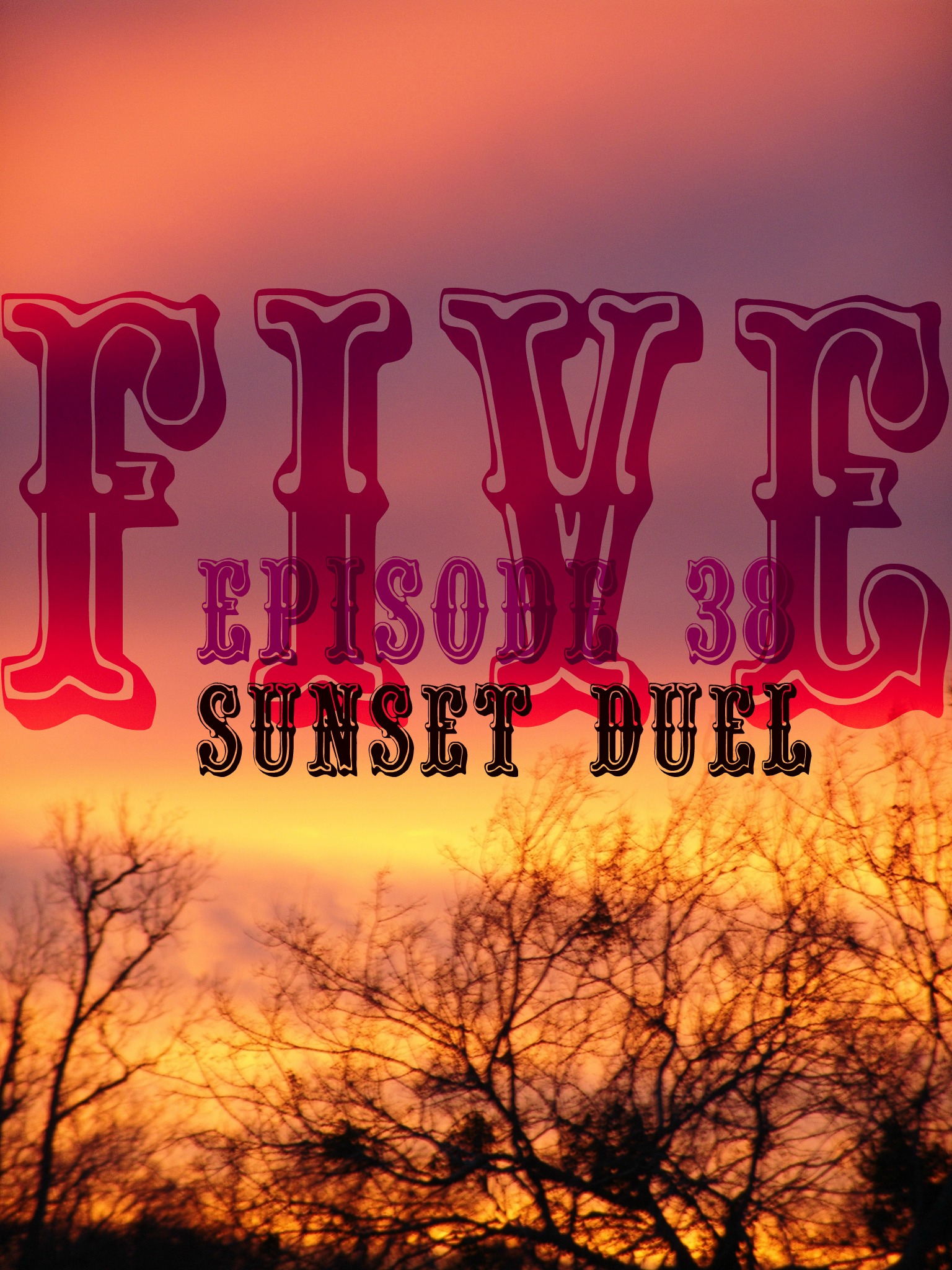 Five: Episode Thirty-eight is based off the following book excerpt from my science fiction supernatural thriller, The Contingency Generation.

Flash sets the van speed for MPTV- maximal per terrain velocity. He’s eager to put distance between us and the DCN troops at the school.

The smoke smell from the box overpowers the air. I shine my wrist light on the contents, which seem to be mostly clothes.

We hit a curve in the tunnel, and a tool carrier rolls and spills open.

“You okay back there?” Flash briefly glances my direction.

“I’ll do better when we can travel at a sensible pace.” I grope around to collect the displaced tools and latch the container shut.

He pats the passenger seat beside him. “Better vista up here.”

“Yah right. Tunnel vison no matter where I look.” I reach forward to place Bow’s drawing on the console beside him. “Look at this. Bow gave it to me. It was inspired by a story the missing teacher told. Bow said the teacher told the class the story came from the Book of Wisdom. Do you mind if I take a look at the belongings in the box to see if she had a copy?”

“Help yourself.”  Flash flips on the lights and inspects the childish drawing. “Global Safety did not restrict handling as long as I deliver the property.”

He hands the drawing back to me. “They’re just going through the motions to appease Universe. The number of resistance sympathizers is growing, and almighty U has designated the relocation protest efforts as a level two threat.”

“I’d hate to live in the mandate region.” I set aside a pair of small black boots and begin rummaging through the rest of the box. “Even the thought of relocating makes me nuts. But still, supply routes have to consolidate somehow in order to keep pace with demand.”

Flash dims the cab lights but leaves the cargo bay bright. “Bow’s right you know.  Chris said the sympathizer teacher often referenced the Book of Wisdom when she taught the children. Not everyone agreed with her use of the stories, but she insisted that specific stories supplied excellent examples which fit the theme of the school. She denied any conflict with Universe’s Freedom From Religion law. She claimed she should be commended for promoting the school’s theme and not treated as a religious supporter.”

“Is the school for SHEOL worker’s children?” I ask, feeling through layers of clothes for anything that resembles a book.

“Not unless they’re disabled. It’s a boarding school where the students learn basic transformation skills. The founders believe that young people who endure certain life challenges are best suited, when properly taught, to harness their adaptive abilities and develop the transformations needed to secure the world for future generations.”

“What are transformation skills?” I’ve reached the bottom of the box and hold up the last item, a small navy suit jacket with the school emblem, a circle composed of four colored wedges. I run my fingers over the raised crest.

“Miracles. Students achieve giftedness in the miraculous. All science based of course.  Their skills develop in four primary areas. Conversion, which is substance transformation, and it allows for new versions of fuel or material. Multiplication is a process that implements ways to increase food and water supply. And Restoration studies yield students who are expertly equipped for maintenance, repair, or healing techniques.

“What about the fourth?”  I fold the jacket and hear something crinkle in the pocket.

“Can’t remember … Something about service I think.” Flash becomes silent as he formats the navigation screen.

I slide my hand inside the jacket pocket and remove a folded paper. I open it and tilt my wrist light to illuminate the surface. A large forty-three is hand printed at the top. Two columns of six smaller numbers are paired underneath it. Ten is the top number in both columns. The rest are random.

I tune back to what Flash is saying.

“The kids adored her. Chris did too. They had no right …”  Flash stops talking.

“I guess you’re talking about the missing teacher. I hope they find her.” I stuff the note in my pocket.

Stunned by this disclosure, I immediately scramble to sit in the front seat.

“What are you talking about?”

Flash looks unhappy. “Shit. I wasn’t supposed to say that.”

“What do you mean? I thought she disappeared.”

“There’s no real evidence that she died, but Chris believes it. He said the teacher was discovered bleeding and unconscious. The student who found her went to get help. When staff showed up, the teacher was gone. It was an older student, and he’s very reliable.”

“Do they think the fire was a cover-up?” Something unwelcome tugs at my consciousness.

“Chris thinks so. It broke out that night in the teacher dorm. Her room was the only one affected.”

I know what bothers me. The paired numbers on the note are not haphazard. The arrangement is familiar.

I take out the note to re-examine it.

“What’s that?” Flash intrudes and reaches for the paper in my hand.

“Sorry.” I hand it over. “I found it in the box inside a jacket. I’ve seen the numbers before.”

“The sequences are the same as those used in the messages I’ve supposedly received from Five. Except for my first contact, which was a full letter, the rest of my messages simply have the words, “Book of Wisdom,” followed by a string of three or more numbers. I’m guessing they lead to a specific place in the book.”

“Are you sure they’re the same?” Flash hands the note back.

“Yep.” I study the note. “Just like Bow, I’m a numbers fan. The number forty-three is common to all of them, and it’s the first number in each sequence. I wish I could check all the messages coming in, but my Global Comm data device is 1820 miles away in at my residome.

“Which is another good reason to get you back to Region Eight as soon as possible.” Flash taps “display” on the navigation screen.

He traces our travel route as he speaks. “The way I figure it, we’ll take the Keystone tunnel to the Roberts leg and then exit at Grant for a short above ground jaunt. We’ll eventually enter the East West 70 tunnel at Littleton and arrive across the country in three hours. You’ll be snoozing in your residome somewhere around oh dark hundred. Not bad for a journey that takes most mortals twenty-six hours topside.”

I groan. “Yah. But topside scenery is so much better. I’ll need a solar fix at Grant before we hit the interstate. That is if the sun’s still up.”

Flash checks the weather watch screen. “We’ll get there before sunset.”

Forty-seven minutes later we wait for security clearance at the Grant tunnel exit.

My eyes feast on the orange glow crowning the tree-shadowed mountain range. The map screen identifies our elevation at around 8000 feet inside Pike National Forest.

Flash returns with his paperwork but stops to talk to a man with a backpack. I see the man gesture to a gravel road that appears to climb the slope just to our north.  When Flash gets in the van, he converts from autopilot into low gear. He makes a u turn off rail and then turns right onto the gravel road

“Where are we going?”

“Sunset view just past this tree line up the hill. I think you’ll like it.”

I smile and put the window down. Cool air awakens my skin, and the scent of earth and pine slips over me like a welcome cover. Mr. Ancient has a heart after all. He somehow deciphered exactly what my spirit needed. If he were many decades younger and held more ambition, he’d likely beat out Fol as a Life Partner contender. Although Fol has the ambition and youth, he sorely lacks patience and empathy. I shiver, wondering what display of anger I’ll have to endure because I didn’t follow Fol’s plan and wait for him at the dwellings in SHEOL.

Soon, we reach an overlook, and Flash parks the van to the side. I step out and gaze down into the darkening valley where small gleams of light indicate the present population.

In front of me, all is brilliant gold, including the fir trees that blanket the rocky slopes. The magnificent contrast comes exclusively from each object’s position in relation to the fast disappearing rays of the sun. Once the sun drops behind the range entirely, each will turn into inky black clones of their already shadowed lower neighbors.

I feast on the transient moment and marvel how light can transform the ordinary until it supersedes the natural and all becomes glorious.

I shift my focus to the side and slightly below, and I’m startled to see the form of a man in a treeless opening. I nudge Flash and whisper, “There’s someone down there.”

I shield my eyes to see better.

Flash does not respond but takes off for the clearing. I follow behind and soon see that my apparition is merely a statue.

Standing atop a tall squared off stone base is a very old depiction of a man with downcast eyes. He’s dressed in a floor length robe and clutches the edge of his cloak against his chest with his left hand and his right hand and arm extend straight out with the palm down. The figure’s gesture seems to speak of peace and humility.

“He is still here.” Flash speaks in hushed tones.

“Christo de los Rockies.” Flash holds his hat and circles the base, surveying the figure. “I can’t believe it’s in such good shape.”

“Over two hundred years. I wasn’t sure. I thought it might be gone.”