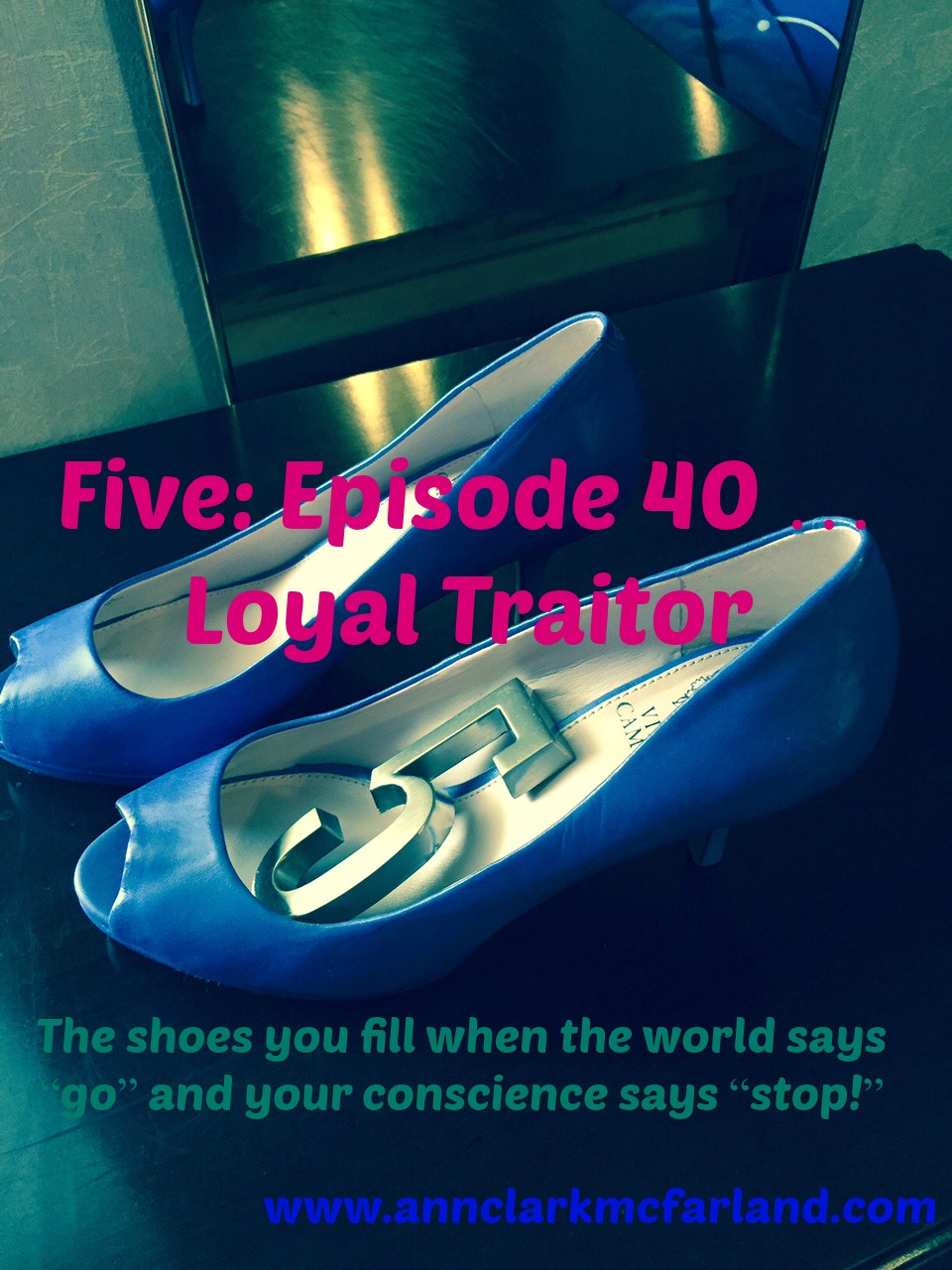 Five: Episode Forty is based off the following book excerpt from my science fiction, supernatural, thriller, The Contingency Generation.

In the artificial morning glow of a SHEOL window, I see that the solitary shape is really two people huddled together on a waiting room bench. Soft muffled sobs come from a woman held in the embrace of a burly man. The man speaks to her in such intimate tones that I feel like an intruder.

“Jess. Jess. Stop, my love. You can’t think of it that way.” He rests his cheek on her hair.

“I know. But what if it doesn’t work?  Once they try, then it’s over.” The woman’s voice comes out muffled from his chest.

“Yah, babe, you’re right, but you gotta ask the other question, too.”

“What do you mean?” She lifts her head and wipes her nose on her sleeve.

“What if it does work? Then we have our Natalie back again.”

Hoping to retreat before I’m noticed, I slip back into the hall.

“Hey, doc. Wait up. We’ve got some questions for you.” The man’s voice stops me.

I return to the conference room door. The two now stand and hold hands like young lovers, although my guess is that they are in their mid-60’s. The wealth of their obvious affection for each other transcends the frayed edges of his jacket and faded stain on her blouse which suggests a life of meager means.

“Are you sure you don’t need more private time?” Sensing that I’m also under some kind of scrutiny, I shift my grip on the cumbersome legal tablet and offer my hand.

“Hell no.” The man grabs ahold and shakes with such friendly gusto that I feel my wariness slip away.

“I guess we best get used to the idea of no privacy cause being kin to the first person to get resurrected is gonna be a big public deal. I’ve been telling my Jess here that our Natalie will be a star—a shining hope for all that’s waiting their turn.” He speaks in rough eloquence.

“Well actually it’ll be more of a private affair.” I’m overwhelmed by his enthusiastic words and obvious trust in me, but I must not falter in my professionalism. “Natalie will unofficially be our first human resurrection, but no publicity will be allowed.”

I speak lightly hoping to gloss over the reason that Universe specifically did not want the first resurrection to be publicized. If there is failure in any part in the resurrection process, then such an outcome is best experienced in private and not in front of the whole world.

“Unofficially? What does that mean?” The man’s eyes narrow.

“Our program’s financial backers have requested a very specific resurrection to be publicized soon. So, in the eyes of the public, it’s that resurrection the history books will record as being the first and not your daughter’s.”

The man seems disappointed, but the woman suddenly becomes animated and hugs me.

She speaks in my ear. “Thank you, oh, thank you. I can’t bear the idea of turning our Natalie’s resurrection into a spectacle.”

As if taken by surprise by her own actions, she quickly releases me and steps back to smooth her bobbed gray hair behind her ears. “Sorry about that.”  It’s just that Natalie is all we have. We couldn’t afford the expense of regulation genome selection to make our own, so we jumped at the chance to become Raising Parents when the first Leave a Legacy campaign was publicized. We passed Universe qualifying parent exams on the first try and had our baby in our arms a year later.”

The man puts his arm around her and adds, “Natalie will always be her baby even though she lived to be 33.”

I’m speechless and only able to nod at the disclosure. I didn’t expect the feelings that are now washing over me.  At my suggestion, we all sit at the table to go over the legal consents the couple must sign.

There, I explain the resurrection procedure and possible outcomes to Natalie’s raising parents. The process, a normal routine for everyday medical care, reminds me that I’ve spent many years behind the curtain of factually focused science research, and I’ve not had to give much thought to the emotions I now encounter.

After I finish, I return to the data bay outside the theater where the resurrection will take place in less than an hour. The ectogram results confirm the cylinder occupant to be a 33-year-old female who died the way all our John Does have died—as a victim of the Bonemic Plague, I muse at the oddity of referring to the resurrection candidates as “John Does,” because it’s not they who are nameless, but it’s the individuals who initially contributed to their existence who remain sheltered by anonymity.  Natalie is a product of group effort, yet with the exception of her raising parents, the rest probably don’t even know, care, or recall her existence.

In truth, Natalie’s genetic material came from multiple donors. She was then nurtured over nine months in the womb of a professional, government regulated surrogate birth mother. None of these connections concern me, but her individual relationship with her raising parents now haunts me.

Pushing ahead in the John Doe trials will affect the life of Natalie’s aging parents all over again. Few but myself and the team know how far a leap it is to jump from successful bird resurrection to human resurrection, but now all the world is asking for it.