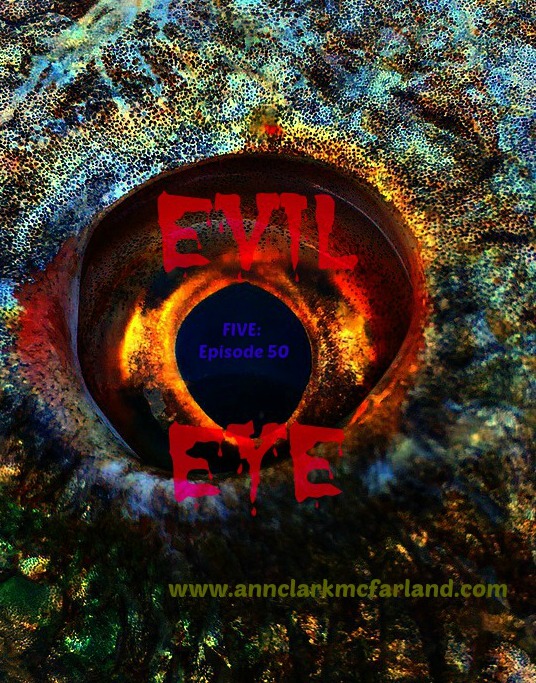 Five: Episode Fifty is based off the following book excerpt from my science fiction, supernatural, thriller, The Contingency Generation.

Endless rows of microtherm cylinders stretch out across the curatory. DCN transfer agents maneuver a cylinder into a vacant slot nearby.

“They’ve been arriving daily since the sabotage.” Fol motions to the workers and they step aside to let me inspect the monitor for viability.

“Who decided to store them upright? In the Abide, the resurrection candidates are placed horizontally in module banks.”

“I did. It’s an improvement and more convenient for priority selection. Certain life restorations are more urgent,” Fol seems pleased.

“DCN efficiency prevails once again.” Baph gives me a knowing look, and her voice is touched with sarcasm

“And such excellence makes life better for everyone, including you, dear Baph.” Fol’s irritation shows.

Be careful. Don’t provoke. Surely Baph knows to keep the peace when agendas are at stake. If we’re to carry out our plan, then the illusion of admiration over Fol’s achievements must appear sincere.

“It makes sense to me. Your company is by far the best with supply and delivery.” I say soothingly.

“Of course we are. It’s our trade,” Fol snaps back. He turns to follow a worker.

We move in step behind them, and Baph changes the subject. “Who will be considered next after father is resurrected?”

Before I can respond, Fol answers. “It’ll be Kate, of course.”

“Not a chance,” I say, angered by his presumption. My words are for Baph’s ears, but my voice comes out louder than I expect.

Fol stops and turns to me. His eyes warn conflict. “Really? I thought you’d want your dear friend back as soon as possible.”

“Not as a psycho-social deviant.”

“Why do you believe the outcome is permanent?” Fol says.

“I believe nothing about the outcome, only that it’s happened in the other three trials. Until we can discover if it’s permanent and why or how to prevent it, then there’s too much risk to proceed.”  I speak firmly. I won’t lose this fight. Fol must see the logic.

“Your caution is admirable. I’m not sure Birch will agree to a halt. Besides, I asked special permission for Kate’s resurrection to be scheduled before other leaders are raised.” Fol’s answer is silky smooth with both charm and threat.

I’m silent. It’s the best response to let Fol believe that he’s won. But he hasn’t. he’s merely shown me the battle lines.

Fol’s words confirm Baph’s crazy story. He fully intends to see Kate resurrected. His claim to be able to supply souls for resurrected bodies is proof that he’s either priming for an audience trick or delusional about his power. No matter which occasion, I refuse to take the bait. Baph and Kate’s life must be protected from his manipulation.

At the end of the aisle, we turn and follow the DCN worker to the data bay door, which Fol swipes open.

A cylinder rests on the scan threshold inside. The identification reads, Kate Auburn Rigsby.  Moisture floods my eyes. How can I be alive and she’s not? She was right about so many things.

“The codes synchronize, so the verification is positive, but I know you’ll want to re-confirm and run the ectogram yourself,” Fol says.

“Of course,” I move quickly to the console screen to cover my sadness. Fol would only make use of my emotions to some advantage.

Before I sit, I remove my shoulder bag, and I’m reminded that I still have the book. I can’t risk Fol’s anger if he discovers Baph’s secret goal, so I quickly slip it under the chair.

On the console screen, I center the illuminated cylinder outline over the screen image and select scan.

We watch the parameters appear when the ectogram initiates. Beginning with Kate’s name, a mechanical voice precisely delivers identification stats. Hearing the data drives away the crazy hope that Kate might still alive. Whoever impersonated her by masking her face at the meeting will feel the heat of my revenge.

“See, my dear, Kate’s life is yours to deliver. Soon you’ll speak with her again. Think of this great gift you’ve been given. Raising life returns relationships. It restores all contingencies. Life’s greatest losses are caused by death, and these voids are vanquished by this power.” Fol’s whisper inflames my ear.

I turn to respond, but instead I’m caught by his eyes. The colors are unexplainable, but the truth they force me to see is clear.

Although he speaks tempting words, Fol is against me. His praise of what is mine to grasp is not given to encourage me but to influence me.