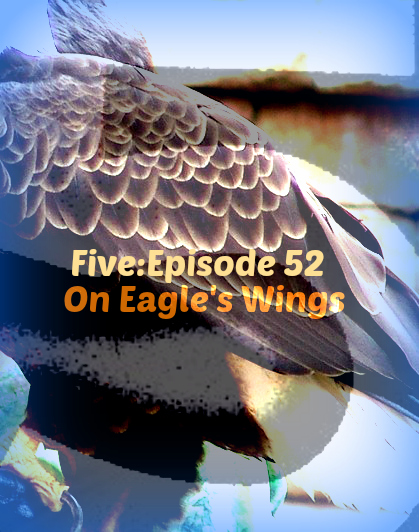 Five: Episode Fifty-Two is based off the following book excerpt from my science fiction, supernatural, thriller, The Contingency Generation.

Blood drips from a cut on my hand onto the console map. It lands on exit forty-four, which opens directly from Kerioth Medical to the outside. The closest pedestrian passageway from there is Remit, which will take me to the Upper East, the 1782-mile auto tunnel that opens to the surface near Sector 8.

My route out of SHEOL is the same way Fol brought me in. Only this time, I’ll be alert and not drugged. The route will be dangerous, because it runs along the shallows. Safety during seismic activity in SHEOL means going deeper. The Upper East may already be blocked, but I’ll have to take the chance.

I app the transit details and note the twenty-minute calm lapse since the last earth tremor. I place a consult request for Nesbitt on the console system. It’s less likely to be tracked by Fol’s DCN watchdogs, which I assume are everywhere.

Facing the truth means Nes needs to know that the situation with Fol is out of control. I won’t rob the future to pay the present. “First do no harm,” is the medical principle I’ve sworn to uphold, and now keeping it may cost me my career.

The resurrection trials can be stopped by a council majority. I intend to cash in on every favor I’m owed and persuade the council. I won’t continue to perform the procedure until a new research team discovers how to resurrect life and keep intact a person’s moral compass. Kate would never have agreed to be brought back from the dead if she thought her ability to choose right or wrong would be eliminated in the process.

How could I get right and wrong so mixed up? I’m not sure if I believe Five is real, but my first message was right. Fol, at the very least, is a thief, a liar, and maybe delusional.  I won’t let manipulation and lies prevail at the helm of science and medicine.

But is he a herald, as Baph states? Is my life partner a being from another realm? I’m not sure my scientific sensibilities can go there.

I know I’m ashamed of my weakness for being manipulated. But if somehow, despite this flaw, I’m spared the gruesome aspect of being buried alive, then I must take my survival as a gift and live only by my conscience from now on. Finding a proper place to put Kate’s body, gaining safety for myself and Baph, and getting back to Sector 8 and obtaining a halt to the resurrection trials are my priority, but succeeding in all of this will take wisdom and strength beyond my resources.

I unbend the corners of the book and tuck in a torn page. I wish I had time to decipher more about the power it has. It’s still a mystery to me. I should have looked at the messages when I had the chance. Even if the message writer’s identity is more likely to be a disgruntled customer of Fol’s company and not a female relative born 150 years before me, I still might have found some tips.

With no one to witness to my predicament, I whisper into the air, “Help me.” If it’s Mortar’s book and Mortar’s words and power, then it’s in his name I’ll ask. There’s no time to figure anything out. I just ask.

I submit the consult request and power off the console system. The microtherm cylinder housing Kate’s body will require at least two people and a transfer bot to relocate.

I search the data bay for options. There’s usually a bot nearby if a cylinder is brought in transport mode.

Enlisting a worker is too risky.

Sirens sound again. Tremors shake the room. Wall panels separate and fall crashing to the floor. I cover my head briefly with the book, but I realize I’ve no more time to play it safe and hide. I must get to the surface with or without Kate’s cylinder.

I shove against the container with all my might, but the added fluid and casing structure makes it impossible to move.

I search for something to use as leverage and perhaps turn it on its side.

Suddenly, of its own accord, it moves about three feet and then stops.

How is that possible?

I enter the travelator.

The choice is mine to make.

And so I choose.

A voice close by says, “It is finished.”

I turn to find the source and instead see Fol pushing toward us through the throng. Even at a distance his rage is unmistakable. His face contorts until it resembles a roaring lion.

A sudden heavy weight grips both my shoulders, and people around me stop and gasp. I’m caught by a giant eagle-like creature, and a second one swoops in front of me and snatches Kate’s cylinder and flaps to the top of the SHEOL cavern. People scream when it dives deep and then turns sharply to enter a yawning crevice above the Remit passageway.

I look for Flash, but he’s gone, and Ball’s rolling device is empty. I scream their names as massive talons pick me up out of the lion’s reach. In seconds, I’m dizzyingly high. I close my eyes when cavern walls become arm-length close. Then, in haphazard motion, I feel myself hurtling downward.

My fear gets the better of me, and I have to look, but when I open my eyes, all I see are flashes of creamy white plumage, feathers three times the length of a school child, splayed out in patterned rows along the underwing of my mighty eagle carrier. I tighten my grip as my transport banks right, following its mate into the same rock opening.

The book slips out from under my arm. White like the bird’s under feathers, it seems to float just beneath me, its pages open and imploring, but soon, it’s lost entirely into the cavern depths.

Two things hit me. Kate is gone for good, and now I’ll never know what the messages say.