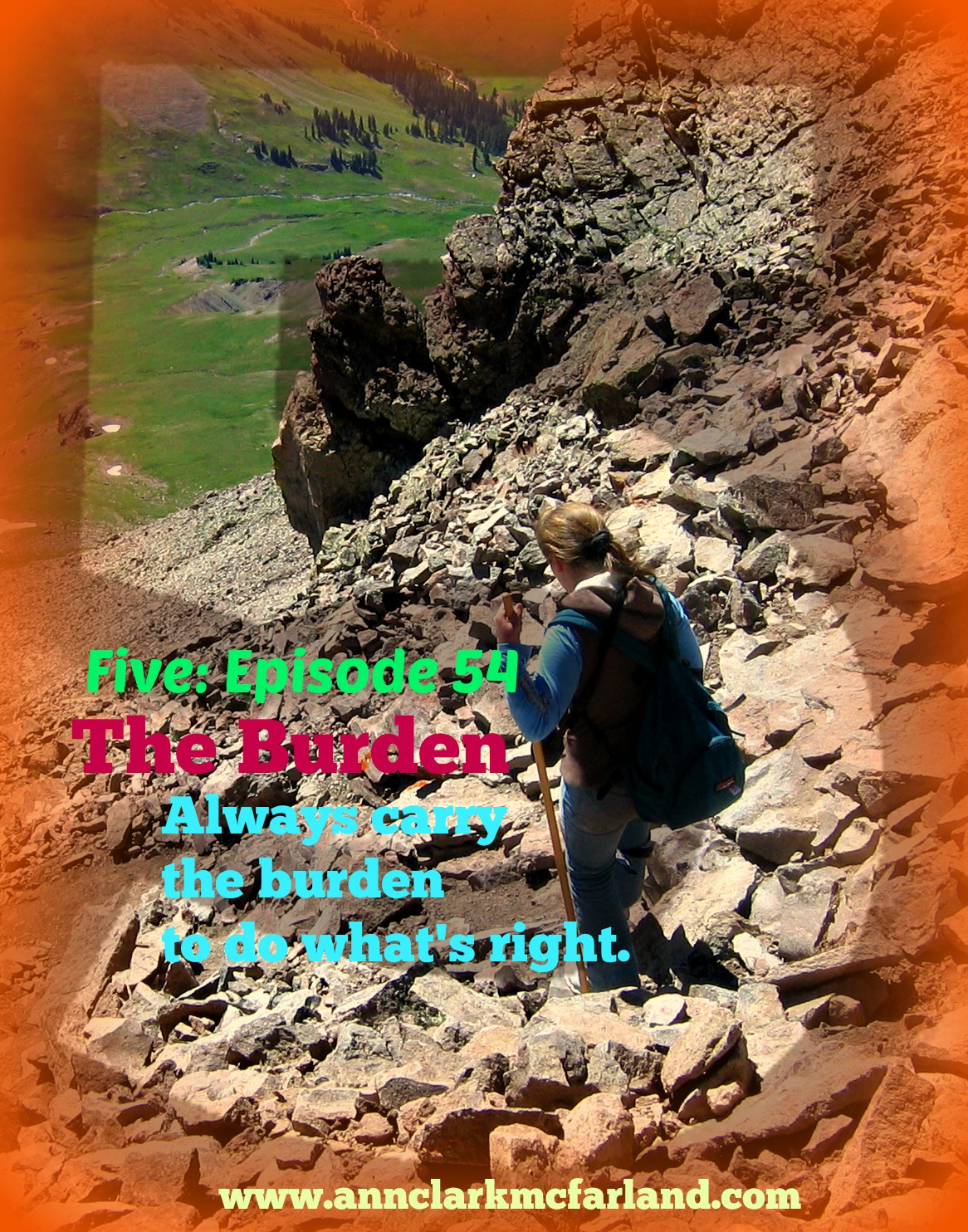 Five: Episode Fifty-Four is based off the following book excerpt from my science fiction, supernatural, thriller, The Contingency Generation.

On our way to the Upper East, Flash carries my burden. Although we’ve left Kate buried in the meadow, I’ve picked a stone from near her grave to place in the garden where I keep her herb plant.

At one point, we cross over an elevated ridge and I trip over large log which turns out to be a remnant of the long-gone railway submerged under drifts of decaying leaves and overgrown brush. A brief stretch of sentinel trees march along each side of the embankment, but then all is overtaken again by the surrounding spring forest.

If Fol had been born centuries earlier, the railway would have been his invention, but instead, he created DCN’s high-speed tunnelways, a network of highly protected and expeditious arteries connecting people with supplies throughout Region 8 and 9, which is all of North America. The tunnels run in the approximate directions of twelve of the most historically traveled Interstates that used to crisscross the former countries of Canada, USA, and Mexico.

Near the end of our trek, our path converges with a well-worn hiking trail. We decide Balls needs to resume travel in his bracing chair.  Although he can see and walk because we are still outside, his blindness and paralysis will return once we enter the tunnel.

Flash leads the way and I follow after Balls.

The trail crosses the Potomac River at Big Pool and soon we are at the Fairway hub, a waystation alongside the juncture opening for the IT81 tie-in tunnel that runs down from Canada.

People congregate in and around the hub, snapping photos and stretching their legs, especially those who’ve arrived from the west coast.

With so many travelers around, our appearance from the hiking path is unremarkable. A jacket covers the tears on my shirt.

Flash, dressed in his DCN transport uniform, slips away to finagle use of a delivery van. Waystation hubs have surplus vans on site ready to be used as replacement transport vehicles when needed. Flash plans to claim he was off duty on the hiking trail when he received a call to make a pickup for a TRIUMP transport. Balls enters a code sequence to cause Flash’s data screen to exhibit a legit request that backs up the story. Any official worth his rank knows TRIUMP requests receive top priority because of the current events connected to the resurrection trials.

Balls and I slip off to the eastbound trailhead a half mile away. We wait for Flash at the sightseeing turnaround. He picks us up there and loops back to enter the tunnel. As a verified transport agent, he has full clearance, Balls and I are hidden in the back of the van.

Flash tells us later that he turned his head away from the camera hoping it would not trigger a match to his identity. DCN’s security system sweep cams everyone, and fines are generated if passengers don’t stay facing forward. The scan runs night and day, configuring matches for specified alerts. Except for Fol, no one would connect Flash to the large eagle that carried me off in SHEOL, so he’s probably requested a scan match for the two of us for some bogus reason instead. Balls true identity is still unknown to Fol, but we need to keep it that way.

“Guess what else I heard from the powerful ones?” Flash says this with a grin reflective of his mocking tone. “The guard from Fairway mentioned the tunnel congestion out of SHEOL has transport backed up and diverted to IT25 southbound. From there travelers will have to connect to IT40 for any east or west running direction. We’ll beat Fol into the city by at least a couple of hours. That’s really good news.”

I should be ecstatic, but all I feel is dread. Heralds may be used to high stakes and chase antics, but my life is typically a series of methodic rituals, and some may even say, a cycle of scientific boredom. Although resurrection has elevated enthusiasm for its scientific achievement, there’s a difference between that feeling and the sickness that seems to have settled permanently into the pit of my stomach since partnering with Fol. The amount of deceit and manipulation I’ve experienced that originates with him is almost beyond comprehension.

Am I really strong enough to go against him? He’s regarded as more powerful than many Region leaders combined. He brings the people what they want. His company supplies almost all the world’s demands.

I’ve been on the run from Fol since the day I left my office to hunt for Kate’s body in the Abide. Even though the deception was Baph’s doing, the heshee did it to revile Fol. When I chose to follow my heart, I became a threat to Fol’s plan for me, and he made an attempt on my life. From that moment on, my life has become a frantic digression of events triggered by Fol’s foils.

I’m caught in a cycle that I’m ill equipped to end.  Fol will crush me if I stand in his way. I don’t know how, but truth says he will. Surely there are others who’ll see the need to stop the trials. The council must meet and decide, and Nes is my ticket to gaining their cooperation.

In the cover of dark, I whisper yell the two words that have become my silent new ritual. “Help me!”