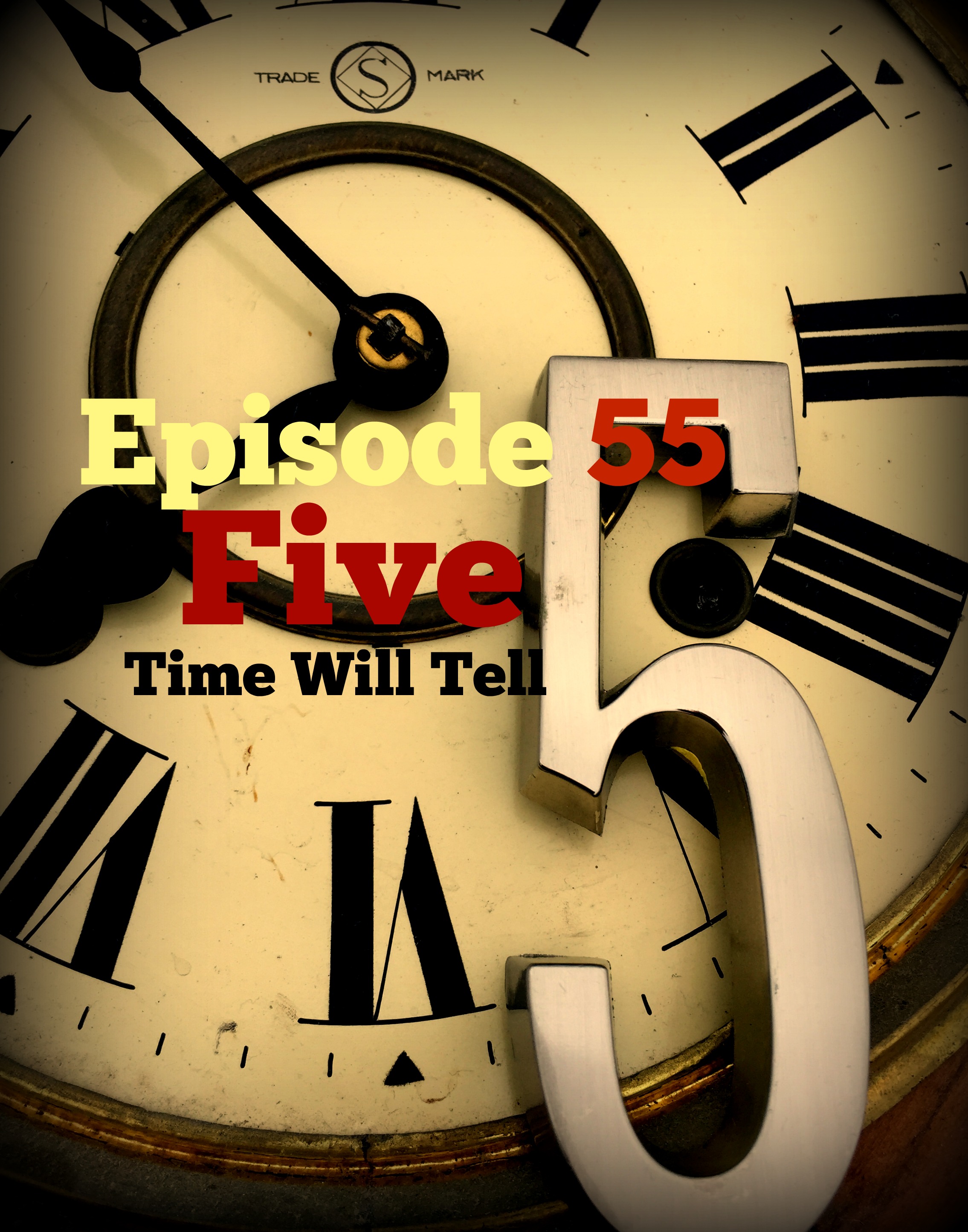 Five: Episode Fifty-Five is based off the following book excerpt from my science fiction, supernatural, thriller, The Contingency Generation.

We cruise the divide between Literary and Construction. Nes said Laura’s house was on the edge of the neighborhoods. I knock on three different doors but no one’s heard of her. Then I remember Laura’s obsession with antique roses. In front of a small steel clapboard is a bank of apricot beauty roses with a creamy white bush cornering each end.  It must be the place.

I stand on the freshly painted porch and try to feel casual about my quest even though there’s a DCN van with two supernatural beings waiting around the corner for my return.

Despite no answer, I remove my wrist screen when I hear a loud thud on the inside. I swipe the outline of the door frame and risk the consequences of being discovered should Fol chose to initiate a trail search.

My discovery is invaluable. The scan penetrates the wall in front of me, and the rendered image shows a figure struggling to close a suitcase that’s spilled open on the floor. I bang on the window glass and yell at the door frame. “Nes, I know you’re in there. Open up.”

The door is flung open, and after a quick glance up and down the street, Nes pulls me inside.

I wince at the strain on my shoulder and let him take the wrist screen to switch off the power.

“My ticker’s gonna croak. You know they’ll find you with that damn thing on. For god’s sake, Leave it off!”

He rushes to a nearby table as if ghosts are after him, grabs a couple pills from his Med Pod dispenser and gulps them down. Then, holding his chest and breathing heavily, he slumps into a chair. His color is ashen.

“I’m so sorry.” I sit beside him. “It was stupid of me, but I had to find you.” While I wait for his wheezing to end, I strap my data screen back in place.

Finally, he manages to scold, “You shouldn’t have come.”

“Fol wants to know if you stop by.”

“Please don’t tell him. I need time to stay ahead of him. You know why I’m here.” I wait for his acknowledgement, but he turns a glassy eyed stare toward the door and plays with his drinking cup.

I take the cup away, and he makes eye contact. I speak to him in measured pauses as if I’m explaining bad behavior to a child. “Nes….the resurrections….. are… a mistake. We need to call off the trials.”

He reaches out and clumps me on the shoulder, and I yelp from the pain.

He looks startled and examines my blood on his hand. “What the hell? You’ve been hurt. Who did this?  Was it him?”

“No. I’m fine.” I take the towel he uses to wipe off the blood, and I press it to my shoulder. “I got scraped on my hike getting out of SHEOL. That’s all.”

“Then you must know that SHEOL is shut down. The tremors have done considerable damage. All medical teams and patients are being transferred back to Triump. Resurrection candidates too. Sabotage and resistance sympathizers are being monitored. I guess you know you’ve been labeled as one.”

“Well that’s crazy. I’m not, and you know it. I’m dedicated to delivering responsible resurrection, but for now, all evidence points to the fact that we might be propagating sociopathic beings who can’t tell right from wrong. Someone needs to call for a council vote. I need your influence to back me up.”

Nes removes his glasses and vigorously rubs his eyes, a nervous tic I’ve seen him display when he’s upset. He rakes his hands through tufts of wispy grey hair and then replaces his eye wear. “Don’t you see, I can’t, S. I’m done. I’m retiring.”

He staggers to stand, and his voice continues soft but firm.  “In fact, I was just heading out the door. I’m off on a scout trip to Sector 30 to find new living quarters.”

“The relocation sector? But what about Laura? This house?” I reach to pick up his belongings and stuff them back in his suitcase. I stay silent while he lectures, but I can’t believe he would voluntarily choose to move over 1200 miles away to an area of unrest.

“I’ve got to face reality, and so do you.  Laura’s dead. She’s not coming back. For almost six years people have ingested Rejuvaceten on their deathbed hoping for the time when science would realize the full potential of the Formula For Life. Achieving resurrection has been your focus since the day you got out of school, and before you, it was the goal of your father. The fact that there are a few hitches does not mean we should stop the entire trial process. The only way to perfect the process is to keep going forward.”  He latches the case shut and places it by the door and returns to the table to spread out a square of tevektyne.

My heart sinks when I hear the coldness of his recitation. Why is he talking like this?  For as long as I’ve known Nes, he’s always chosen excellence over compromise.

He stops and fidgets with his wrist screen and then thrusts the life clock view in front of me and taps the current stats. “See? Even today the population decline has accelerated. It’s reaching quantities beyond what anyone thought was possible. Universe United’s decision for the resurrection research team to receive primary funding is well promoted as being the best response to the contingency of the human race becoming extinct altogether. Resurrection achieved represents hope to the masses who are dying. Nothing you can do will change this direction. You’re too late.”

Nes wraps his Med Pod in the protective cloth and then places it it’s hard shell case. “Can’t leave home without this baby. Latest compact, but it prints every pill I need and more at the sound of my voice.  Doc Tom switched my heart meds again, and he gave me a script to use at a Universe APM  because the Med Formulary hasn’t updated it yet for personal pod use, but he was wrong.”

He pats the case and the latch self-seals shut.  “Little Suzie here spits out my new dope in sixty seconds flat without a hitch. How did we ever live without these things?”

He grins at me and places his old flat brown cap on his head. “Here’s the real problem, S. Not only are you labeled as a sabotage sympathizer, Fol says you’re having a break down, and when you’re found, you’ll be placed under lock and key until you are well again. Birch has been declared the team leader until further notice.”