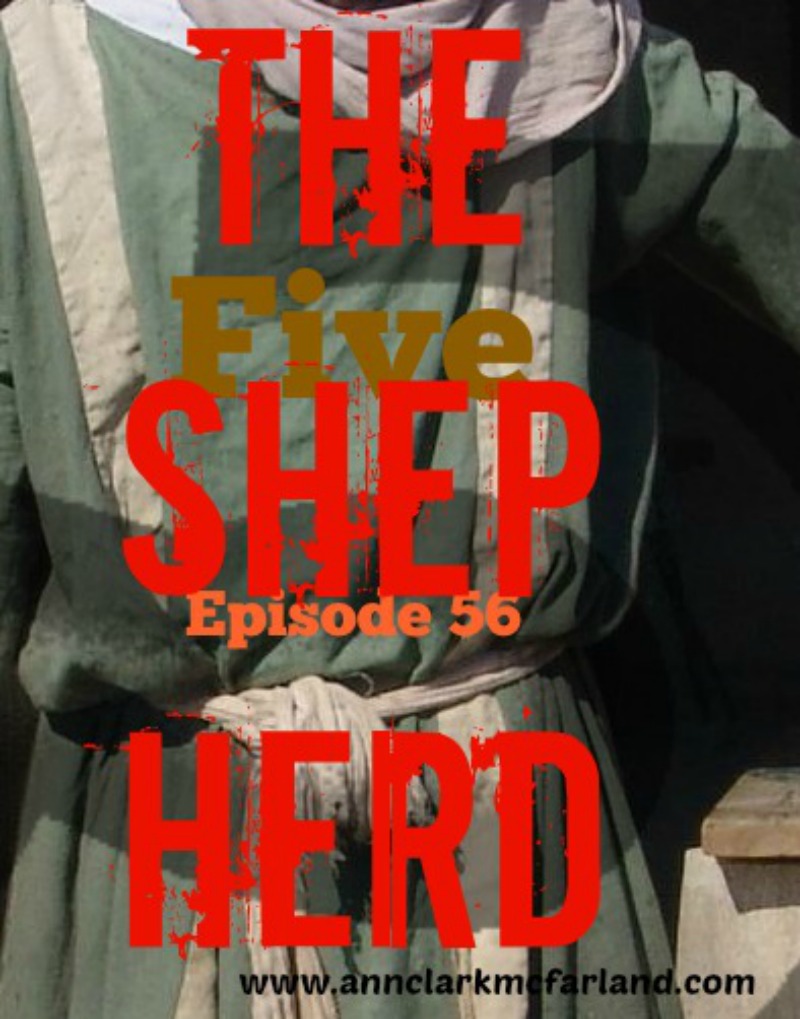 Five: Episode Fifty-Six is based off the following book excerpt from my science fiction, supernatural, thriller, The Contingency Generation.

Endless flocks of sheep graze in every direction across the hills. We are in shepherd territory where I’ve been sent to pick a lamb to bear SJ’s new name. The heralds explained that when someone’s name is written in the Book of Life, a lamb is also selected to become their namesake. The herdsmen call the Son, “The Great Shepherd” and they tell how he knows each sheep by its name even though the collection amasses into untold numbers. Most evenings, he comes to walk among the flocks and talk with the shepherd community and, of course, play with the lambs.

We move to a nearby pen where Martha points out several ewe mothers who stand beside the enclosure. Their nervous echoing calls seem aimed at the antics of the lambs inside.

A shepherd appears on the rocky ridge above us and soon is at the gate to let us inside.

Choosing a namesake lamb is a privilege seldom given to a resident of Five unless there’s a restored separation of the generations. It’s an honor I’ve received, because I’m considered a special relative to SJ, my great great, great, granddaughter, whose choice to accept the Son’s rule re-closes the gap of loyalty in our family’s line.

After much laughter and examination, we decide on a stocky little one with complimenting black spots on both shoulders, ears, and nose and black boot marks wrapping three hooves.

“She’s one of Jacob’s sheep.” The shepherd says, reaching for our selection. His voice is hoarse, and I can’t see his features. The lamb struggles fiercely to get away.

A sudden gust of wind opens the unlatched gate. When the shepherd reaches to stop it, his head wrap blows back from his face. He quickly thrusts the lamb into my arms and turns away but not before I catch a glimpse of an ugly scar on his cheek.

He must have been in a fight.

I focus on the lamb and push my face into the soft curly coat. The creature bleats as I whisper SJ’s new name into its ear. I hardly finish before it wriggles out of my arms and skips off through the now open gate to its waiting mother. Their greeting is lost in the lamb’s greedy nuzzle for milk.

“When the feeding is over, we’ll say goodbye to her mother and move your little Jacobite to Namesake Field to be with the others,” the shepherd rasps. “You can spend the first night with it if you’d like,” he adds and uses his crook to send the other lambs out to play.

“We would love to.” I look to Martha and she nods affirmatively.

“Only one. Just you.” The herald stops to whistle and a wolf-like dog bounds out of a shed.

Instantly, I’m uneasy. Whenever I’m singled out for a new adventure or lesson on Five, I’m both grateful and wary. I find myself thrust immediately in a mental battle of “what if?”

Animal predators, although prevented from harming residents, still follow the course of their nature and often prey on other animals in the cover of dark. The scent of harm, although whisper thin, somehow still nudges easily into my consciousness.

I try to ignore the feeling of increasing dread and focus instead on the talent of the shepherd’s dog, a strange hybrid creature named Diablo.

Over time, I know that all my recollections will subside, but when I agreed to be a scribe, I endured the return of memories in order to complete my five message in the sand. One of my greatest fears resurfaced and left behind its name in the process.

I’m afraid of death, and somehow it’s very name is growing into an unwelcome presence that I keep trying to shed.

I wish I did not know about death, but I do.

I know that death is the thing that would forever negate every drop of my being. In my mind, it holds the highest reputation for harm. Ever so vaguely from a long time ago, I remember how my death was the focus of the leader of a band of thieves.

Since Natalie’s resurrection, I’ve learned that if a resident ever endures death on Five (a highly infrequent event,) then the condition is quickly reversed. Early healings and rescues are both instant and constant factors that benefit our lives here.  I was permitted to assist with Natalie’s resurrection, for my benefit. The experience was meant to underscore for me the reality of death conquered, but still, I know that the harm that came to Natalie, and caused her to lay lifeless on the ruby sand, is still active.

My mind won’t let go of this. Although the attempts are infrequent, and the effects are small and immediately met by counter force and overruled, harm still has influence, even on Five.

The display of canine tricks concludes when Diablo stands on his hind legs and puts his paws on the shepherd’s chest and receives an embrace. Then the shepherd pushes it away, and it runs after the ewes.

The shepherd grabs my namesake lamb and commands, “Follow me.”

But the warning in the wind says, “Don’t.”