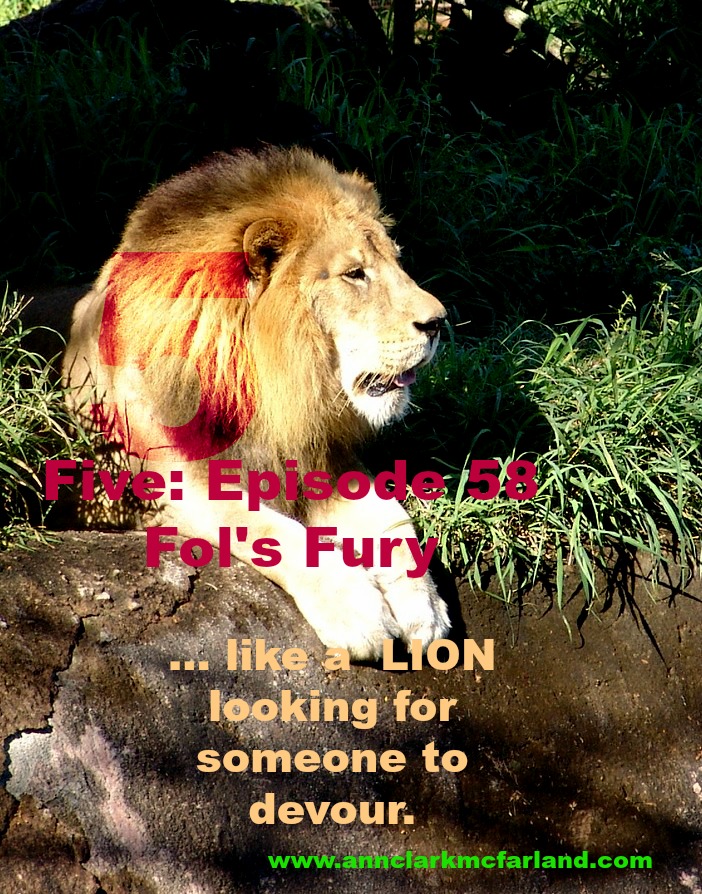 Five: Episode Fifty-Eight is based off the following book excerpt from my science fiction, supernatural, thriller, The Contingency Generation.

Fol roars with frustration when he sees his fur and paws. The scent of cat urine floods his nostrils. Dried scat, not quite camouflaged, lies piled about in the red dirt.

To be an animal is worse than it is to be human. Both are nauseating. Animals aren’t useful to him for anything, but every human soul adds to the tally.

Hoping for fresher air, he climbs to the top of the ridge. The heat leaves him panting. The audible sound beats out a pattern. In his mind, it’s the sound of counting numbers rising in value far greater than Mortar’s. When the day of reckoning arrives….

In the cloudless sky, birds of prey circle in a lazy pattern. He watches them glide lower and lower until they finally disappear into tall grass nearby giving likely evidence of a kill.

The gigantic species, “Ornithur,” as they were once named, remind him of the enormous eagles Mortar sent to SHEOL to rescue SJ. The maneuver confirmed what he’s known for some time. SJ is an extremely valuable acquisition, and he’s not willing to concede his loss. It’s just a matter of time. When she encounters enough difficulties, she’ll come running back to him and not Mortar.

He paces around the boulder’s crest searching for his human trappings. Finding his wrist screen would be nice. Even though he’d have to paw it until he hit the right command sequence to discover exactly where he is.

The dry grassland and sparse trees mean water is scarce, but if Morbid responds quickly, he’ll be spared an encounter with the pride males.

Mortar said his grace would allow Fol’s punishment to always bring him somewhere near a pride where lion food and life abound, but he could care less. It could just as well be Antarctica. He hates being on the receiving end of Mortar’s grace.

It’s humiliating and totally unnecessary. The world is to be his kingdom. In what way does animal transformation reflect any portion of Mortar’s grace?

Fol was once the greatest of all the heralds.

He shakes his hairy halo and tries to spit his contempt, but a lion can’t spit. The curse of his rage is still in full transformation. Annoyed, he lunges toward a gathering of bush crows and sends them shrieking into the air.

Grace was the engine that set the course of his earthbound life in motion.

Grace is worse than death to him.

He roars again. Soon, he’ll have to fight a resident male to gain the food benefit of the pride’s lionesses.

Still …. It’s a lion’s appetite that gnaws inside him, and only flesh and blood will satisfy.

In the end, the antelope becomes prey to the crafty lions, and so will Mortar’s silly game of souls be brought to a close. After all, what is eventual can only be delayed for a time. When Beast raises from the dead, all will see his complete beauty and form. It will be a sight so singular and unmatched that nothing in Mortar’s realm will be found to compare.  Father and son, both, alike, and the universe as witness to the glory of the two. To finally appear as his true self, a being far more glorious than any animal, human, or Mortar, is a longing he must soon satiate.

Until then, blood will have to do.