FIVE: Episode 8 … To Do List: raise the dead, lure the villain, decode the message, reveal the fanatic, and still have time to honor a friend. 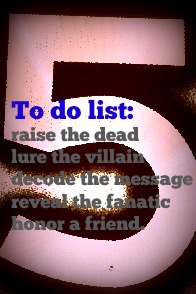 Five: Episode Eight is based off the following book excerpt from my science fiction supernatural thriller, The Contingency Generation.

Kate’s End Message tumbles in and out of my consciousness all night. It’s clear I have a personal hacker. Someone has deleted Kate’s real message and interjected a creepy joke. Some nonsense about Evie and the mysterious Book of Wisdom would never be her choice of last words for me.

Sleep is useless. I meet my team at 0800. If I get up now, maybe I’ll have time to figure things out. Within the defunct research material, I’ve discovered that End Messages generally separate into ten categories. A person’s last words can express or request that secrets be spilled, ask or give forgiveness, convey love, invoke a memory, give direction for work or family, or give a life summary. Sometimes they express regret or emotions like fear, sadness, or anger. Talking about God or an afterlife is a little used category today, but it was often a prominent topic in the past.

Although Kate is a free spirit, she would never joke with me in her last words. If the Book of Wisdom is a virtual book and not an Antique, then I will quickly discover the source.

Fumbling for the top of my headboard, I chose “dawn” as my climate setting. Morning woodland sounds begin to punctuate the air, but the occasional night siren discredits the illusion.

Virtual sunlight fills my windows except in the kitchen where the “world’s best”  do-it –all-even-make-your-coffee-and-mug 3D printer blocks the light. Both compelled and irritated, I deliberately choose instead to make my morning brew the old-fashioned way, straight out of my freezer.

While the beans grind, I attach the return delivery ticket to the behemoth machine and roll it to the door. My product review will not be a rave but a critique and a champion piece for machine specificity. I remove the error message, “Evie’s letter,” from the print slot. It’s likely that the odd correspondence will be attributed to a glitch caused by one of our biweekly sun storms. A conclusion of “operator error” is fine with me, because I don’t believe one machine can do it all. I’ll never subscribe to this thought.

I type Kate’s message, “Found Evie. Book of Wisdom, 43. 11. 25,” into my Genealogy Communications program. “No match” appears on the screen, so I select “advanced search.”

While I wait, I run the monthly Life Clock scan and see that our death rate for Sector 8 has jumped to 17.49. Our birth rate remains at 10.42. We’re better off than some sectors, but superbugs, disease, food shortage, and fertility decline still have the upper hand over most.

My program screen still indicates, “searching,” which isn’t unusual considering it holds over one hundred years of death messages.

Clutching my coffee and cornflakes, I switch on my media wall to watch the end of an early edition news feature. It’s an interview with a chancellor candidate for Universe United’s Division of Parenting and Child Rearing. The position is up for election, and the system is long overdue an overhaul. I switch to World News and see a yelling man, red in the face, leading chanting protesters. They are angry over a mass relocation mandate. Their resistance is against the Division of Equity and Trust who chose Sector 22 to combine with Sector 30. It’s a necessary action due to a severe decline Sector 22’s population count and the resulting increase in resource supplies.

I remember Kate’s remark about fairness. “Everyone wants it until they have to give up something to get it.”

She’s right. I’d hate to have to relocate. Selfishly, and for that reason alone, I’ll pursue my passion in science. Working at my research just to keep the earth evenly populated is a utilitarian action at best. More exciting is the concept that if I succeed in the resurrection process, society won’t have to say a permanent goodbye to genius. Through resurrection, we’ll be able to extend certain lives, individuals whose life work and contribution to society have been invaluable.

This morning only one purpose motivates me. Kate’s life. If there’s going to be just one resurrection that succeeds, let it be Kate’s.

My thoughts sound like a prayer and I remember how Kate and I used to play at prayer. We only knew about prayer because of elaborate history studies promoted by our Child Rearing School. (CRS)  Our school was ranked a level two at the time, which was really amazing, because most schools did well to achieve a status of four.

Being a science geek, I still find religious history boring and even irritating. In class, I worked on formulas while Ms. Nuthouse droned on about the occasions in history where men believed in God and an afterlife. Drilled into us were the detailed events that reflected the dismal outcome of prayer and faith, including graphic accounts of how religion caused many wars and conflicts, a problem less prevalent today but typical in those “faith-filled” years of  the past.

Religious studies had a different effect on Kate. She enjoyed holy fiction studies immensely, and her creative spirit flourished by imitating persons of various faiths. She tried on shades of faith as other girls tried on fashion. Once she made a Passover meal in our dorm room and broke into giggles trying to sing solemnly the Vehi Sheamda. Her historical film about world religions became the teacher’s prime example of an effective documentary short for the school’s required media class.

A red banner appears at the bottom of my news screen. I set my coffee down to adjust the font size. I read, “Important update on possible source of mysterious messages.”

It seems I’m not the only recipient of a hacker’s hoax. An official report issued by Universe United’s Department of Global Safety cautions citizens to treat unusual incoming messages on various devices as part of an elaborate hoax. The messages have similarities, including a warning of the earth’s end. The report confirms that the instigator behind the charade might have access to DNA records, because some messages have named verifiable blood lineage. The really bizarre part is that all the messages claim to have been sent by the recipient’s relatives living in a place called Five.

I’m mesmerized by the news story, and it takes a few seconds to comprehend the chime alert originating from the bottom corner of my wall screen. It was a call from Kate’s apartment which came in two hours ago.

Who in the heck would be at Kate’s apartment at 2 am?

I jump up and punch in the code for her number. Thankfully, the wall is still set to visual on her side. I see nothing in the darkened room, but I hear heavy breathing.

I pan in closer and realize her couch is deformed. A huge man is draped horizontally over it with Kate’s favorite zinnia patterned comforter stretched as far as possible to cover what seems to be his naked body.

To avoid detection, I slowly reach to press the security alarm. It’s obvious that Kate already has a squatter.

The man rolls over and sits. I’m startled and my hand drops.

“Good girl. There’s no cause for security. I’m here legally to transfer her things.”

His form is indistinct.

“Turn on some light.” I order.

The man complies, and Kate’s zinnias hit the floor. I’m relieved to see that important parts of his body are covered by a too short pair of khaki pants.

The man seems amused, but I am not. “How can that be? I’m her Designated Kin. I didn’t call anyone. “

“Why should you? She arranged the transfer.”

“She’s not relocating, you know. She’s dead.” I wait to see his reaction. In the light, it’s easy to see he’s an Ancient. His leathery sun ravaged skin is crinkled all over. I’m still willing to bet he’s a slick con artist who normally sleeps outside.

His only response is to walk toward me and extend a familiar pick-up paper. I magnify the image. Close scrutiny reveals Kate’s signature.

I’m stunned. It was signed last week. How could Kate know she was so close to death? Maybe she didn’t. I wrack my brains to remember if she’d told me she was moving again.

Mr. Ancient lays the transfer contract paper on an end table and picks up a shirt, which he pulls on and tucks into his pants.

I refuse to call him Flash. I’m certain the name is an alias. I hold on to my request for proof. “You’re going to have to convince me with details.”

“Look missy, I’m not from the Regional 8 Transfer Unit. I’m here as a favor to Kate. That’s why I didn’t need you to let me in. She gave me the door code. She told me she was dying. We met last week at Stinkys. She found out I’d just finished up a personal transfer here, and I was waiting to be called to Sector 22 to help with the relocation mandate. To her, our encounter was destiny, and she asked me to keep this.”

Mr. Ancient waves a personal pager in the air. I see that it’s the green kind, usually given to Designated Kin by an owner who is near death.

Why him and not me?