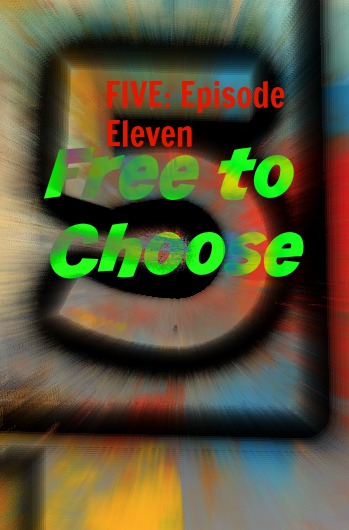 Five: Episode Eleven is based off the following book excerpt from my science fiction supernatural thriller, The Contingency Generation.

A voice in the office crashes through my fear.

“Kind of makes you wonder if he’s even capable of seeing the benefit of subtlety.”

I turn in time to see a slender person, dressed androgynously, replace one of the miniature grotesque figurines Fol keeps for entertainment on his office shelves. The person steps toward me and extends a child size hand, which I shake and release, marveling at the fierce grip.

“Excuse me. Let me mute the sound.” I dial down the noise of crowd clapping. “I’m sorry. I didn’t realize Fol has a…sibling.”

The laugh starts surprisingly deep but ends in a trill. “It’s okay. I’m a Heshee. Neither sister or brother, so the word sibling is most accurate.”

I cover my surprise by gesturing to the row of comfort chairs along the wall, two of which are occupied by large boxes.

Baphomet clears a box from one chair, sits, and then pats a hand on the vacant one beside it. I sit too. In this closer proximity, I’m able to see that his or her short hair is solid silver-white with black tips. The black part is expertly faded into patterns resembling feathers. I’m reminded of Phoenix.

“You like?” Baphomet catches me observing and pats the hair. “I’m a rare bird.”

“No shame. Beauty is for looking. I’m used to stares, but I can see that my existence is a surprise to you. Fol asked me to come. He’s using my logo design as his new company emblem. I’m guessing he planned to introduce us but just hasn’t gotten around to it. My brother is full of surprises. The two of you really can’t be any more different.”

I wonder how a person I’ve just met knows this much truth.

Laughter again. “He tells me everything, so let me make it fair. I’ll tell you all about myself, and to start, I’ll simplify the gender reference. To you, I’ll be a she. Yes? No?”

Tongue-tied, I nod in affirmation.

“Good. That’s done. Now as far as my history goes….” She eyes me with a thoughtful expression. “As a scientist you might actually see the irony in this. I’m a genetic product of society’s quest to fulfill parents’ dreams. I’m an all grown up designer baby. A Raising Couple requested a gender-neutral fertilization, and then, just before my surrogate birthed me, they died in the 1st outbreak of the Bonemic Plague. After that, officials at my Child Rearing school said I would never be requested, but one day, the “Beast” came in and asked to become my Raising Father.”

I lean forward intrigued. There is familiarity in her story. Some of it is obvious. Complications from the latest version of the Bonemic plague is what ended Kate’s life. Yet it’s the word “beast” that somehow haunts me. “The Beast is your father?”

“Fol’s father. My Raising Father. Kids at my school called him that. He visited each week and read to us, which he did with so much animation. Sometimes he would roar and stomp to emphasize the stories. That’s why we named him that”

Now, I remember. Our school, too, had an experience with a man one of my teachers called, The Beast. I am fuzzy with the details but I remember a conflict and that it did not end well.

“Have you heard of this? Did Fol tell you?” Bamphomet questions intently.

“The Beast had an important connection with the school and was allowed to name some of us. He named me Baphomet, because he said I was gangly like a young goat. He also told me the name came from some myth, and he was optimistic that the world, to put it in his words, would eventually come and “worship my little head.” He said it would be because of my perceptual genius.”

I nod. “He sounds like he could be a clone to my Raising Father.”

Bamphomet looks surprised. “You think they are related?” She is serious.

“Heavens, no. Just an expression. My Raising Father also expected great things from me.” I want to say more but I don’t.

Baphomet reaches over and pats my hand. “And your father would be proud. After all, you are the one who will bring us resurrection.”

Her voice now seems to reflect that odd tone of reverence that I often hear when people mention my work. I hate this and give my usual protest. “Really. It’s a team of us, and we build on the knowledge of the team that came before us. That’s important to remember.”

“So it is. So it is.” Bamphomet says this and then scoots back against the chair that towers over her frame. She laces her fingers together in a gesture that reminds me of Fol. She becomes motionless and stares across the room.

I wait but begin to feel anxious in the silence, so I attempt to restart the discussion. “So….. your Raising Father took you out of the school and brought you home and ..?” I trail off.

Bamphomet takes the lead again. “Let’s just call him the Beast. I do. Since his death, Fol and I have reclaimed that name for him. It’s not that he ever hurt us, but the name just suits him. He was driven. That’s where Fol gets it, I’m sure.” She now stares intently at me, and I sense she might be measuring my reaction. I hold my composure and she continues.

“It turns out, the Beast wanted me to prove a point about sexual identity. He believed that given a non- pressuring environment any human could choose who they wanted to become. In my case, since he was rearing me in neutral territory, I could freely choose to become male or female and start the physical process to become that gender. He was frustrated when I rebelled and chose neither. People would say his experiment did not work. To his everlasting frustration and Fol’s delight, I’ve remained a Heshee. I’m one of only seventeen worldwide since such genetic engineering is now banned because of The Great Reversal. I can’t say I’d wish my identity on anyone. As a Heshee, I live to be inconspicuous. There are so many expectations and assumptions. It’s a very solitary existence, but Fol makes it possible.”

As if on cue, Fol bursts thru the door, closes it, turns the lock, leaving the crowd fervor on the other side.

His eyes seek mine, but I refuse to engage. Instead, I stand and gesture to Baphomet. “Look who’s here.”

“Baph dear one.” Fol pulls her to her feet and kisses each cheek. She looks sideways at me and gives me a secret smile.

“Don’t ignore her, Fol.” She says. “Your behavior is very bad today. Of all the ways to act. Especially on your Partnering Day.”

I’m surprised at Baphomet’s words. She speaks as if she’s in charge, which is a power position I’ve seldom seen held over Fol. Fol immediately drops her hands and reaches to take mine. His eyes match his plea for forgiveness. “S I’m sorry. I don’t know why I said it. I know we weren’t going to go public yet, but I just couldn’t stop.”

I know I want more from him than simple words, but Baphomet’s presence ends that quest for now.

“I’m sure it was the emotions of it all. I’ll forgive, but let’s hurry and get the registration done, so you can show your repentance by treating me to dinner at Empires and a show at the Esplanade.

Fol drops my hands and circles back to his desk to pull a single paper off a stack of many. He waves it at me and smiles widely. “It’s already done.”

I take the document and see the heading. It’s the Partnering agreement form. I glance down at the bottom and see two signatures. One looks exactly like mine.

Before I can say more, Fol rushes to me and encloses me in an embrace. I feel nothing but cold. He murmurs in my ear. “It’s what you want right? I got it done earlier. They know me at the registry. I told them you hate publicity.”

I twist away and catch a glimpse of an odd expression on Baphomet’s face. My eyes shift between the two of them. Something has just happened in the room, and I know I’m not a part of it. I can sense this, and I don’t like the feeling. I speak in outright anger. “Fol, you had no right. It’s as if you think you control everything.”

“He does.” A loud unfamiliar voice fills the air. I look for the source. The room walls swim. I see Baphomet pick up a small figurine and hold it out to Fol. It’s the one shaped like a leopard but with feet like a bear. The mouth is open like a roaring lion. Fol pushes her hand away and says, “Not now.”