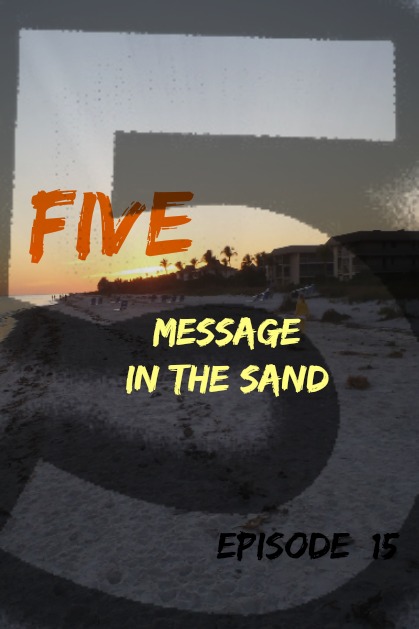 Five: Episode Fifteen is based off the following book excerpt from my science fiction supernatural thriller, The Contingency Generation.

The sand gives way, and my feet no longer touch bottom. I dog paddle into the swells. They push me back toward the shore. A gull swoops past and calls out, “Keh keh keh keh keh.” I feel relief. All seems normal. I sway in the ebb and flow of the ocean’s dance.

Minutes later, my baptism arrives in the form of a large wave cresting over my head. Underneath the churning water, images and voices mingle around me. The water clears and I stand in front of a familiar door.

I hear knocking. When I open the door, I find no one on the other side. At my feet is a package with the word “self” hand scrawled along the side.

I pick it up. Memories return.

In my view from the doorway, familiar sights and sounds flow steadily past me. Occasionally the video-like stream slows and a scene enlarges. It is then, that I am able to hear my voice distinctly and watch my reactions replay with others. The scenes compile until I cannot stand it.

My heart erupts into a tearing aching pain that radiates from the core. Pangs of sorrow, anger, and fear crest over me. In no time at all, I begin to choke because of a strange tightness in my throat.I try to breathe deep but instead stop short when I realize my position. I make a frantic effort toward the surface. Coughing and sputtering I push through the water and finally stagger onto the shore where I waste no time using my finger to trace words of warning in the warm, ruby sand.

I write to her.

This is not a mistake. Although we’ve never met, I’m writing to you because we’re related. I’m your great, great, great grandmother. In relation to time, you and I live five generations apart. My world is doing well, but yours will soon end. Please read all that I send you. You’ll know what to do with it when the time comes.

Consider today’s message from me our introduction.

I was born May 5, 1958, but nothing much happened to me in those first 23 years that will matter to you. Once I started work, all I cared about was my job and the life that it brought me. I purposely chose to live half way across the country to avoid my mother.

Then my job was cut. Even though many people were out of work, I felt especially persecuted by this event.

Just days before it happened I’d lied to my mother and explained how I couldn’t come home for Christmas, because I was too busy at work. The truth was that my work was at a standstill. Then my boss gave me termination papers, and I found myself completely free.

Later when my mother called me, she told me her doctor was sending her back to the hospital. I knew she was hinting that I should come home. I couldn’t tell her about my job situation, because if she knew about my problems, then her impulse would be to try and solve them. I didn’t want my mother’s solutions. I wanted to live life my way.

After we talked, I began cleaning and organizing my kitchen to calm my nerves. My mind went in circles trying to come up with a workable plan. That’s when I heard the knocking.

When I opened the door, I found an unexpected delivery. It was a package on the floor, but no one was in the walkway.

Back then we ordered what we wanted, and it arrived by delivery in a box.

What I first noticed about the package was the word “self” hand scrawled in black marker across one end. The return address was from a familiar clothing store. Inside was a sweater I’d ordered for my mother for Christmas. The company sent the sweater to my address instead.

To me, the delivery symbolized a choice.

I remember tearing apart the box and specifically shredding the weird part that said “self.”

In anger, I vowed I’d be selfless. I’d spend all my savings for a ticket to fly home. I’d be a good daughter and a good person, but all I really wanted that day was to be something else.

And that’s how it began.

Many packages arrived over my lifetime, and I was one of the few who could see the odd handwriting and catch the destructive intentions in the messages.

Still, ALL recipients had a choice.

Most people ignore the tactics of the deliverymen thieves until they are no longer able to perceive them, but these robbers, who exist in a parallel world alongside normal trade, constantly work to hijack life.

My skills weirdly grew greater until I actually began to see the thieves at work all the time.

I guessed later that my unusual ability was a gift. Perhaps it was a talent given to me because I would eventually become a resident of Five—the name of the place where I live now and the realm from where delivery thieves first originated.

My mother had a different theory. She said my ability to see the messages was in me all along, but it became more useful after I studied and memorized words from The Book Of Wisdom.

Today, it makes no difference how I first came to discover the band of robbers and Fol’s treachery. It only matters now that you know the truth about them too.

They must be stopped.

You’ll hear from me again soon.

When I finish writing the letter in the sand, I sit to rest. The others are long gone from the beach.

Only the Arch Herald remains. He leans on a rock facing the water. His white robe billows out in the same breeze that shapes the turquoise water into graceful rolling curls. Robe and wave foam blend as one in the brilliant sun.

I shield my eyes. I have many questions about this process of communicating, but I’m far to exhausted to move toward him. Writing the message in the sand is fatiguing enough. Even more difficult is the matter of re-living one’s life through memory. Next time I’ll need additional preparation.

I try to stand. My head spins. I sink back onto the gritty surface.

I hear the Herald’s advice above the roaring water. “Soul Evie. Next time, write short and only what is necessary. You are given an opportunity for five messages. Today is your first.”

I scramble to my feet to reword my message, but only my reference to the Book of Wisdom remains. The rest has washed away.

My Herald speaks again. “It is delivered.”