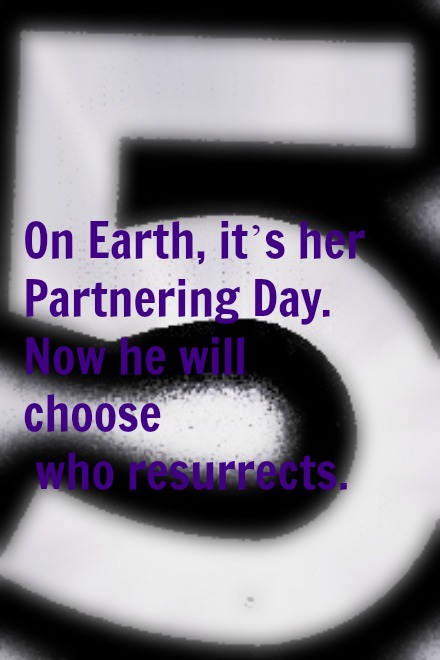 Five: Episode Ten is based off the following book excerpt from my science fiction supernatural thriller, The Contingency Generation.

Time holds no sentiment when it comes to a death. Routine life fills each day, and soon, weeks pass with no real revelation concerning Kate’s End Message. The Department of Communication teams up with the Department of Global Safety, and they extend an invitation to all who have received hoax messages from their supposed living relatives dwelling on Five to submit the messages to a specifically assigned Trace Team. The hope is that the Trace Team will determine the hoax source and relieve the recipients.

Because of the personal connection to the end of Kate’s life, I can’t bring myself to turn over either one of my hoax messages. I will find out anything I can on my own, and when the deceivers are uncovered, I will personally make sure they understand the individual boundary they have crossed. Fol and I disagree about this quest. He sees it as another distraction from my work.

Some days I want to appease Fol, and other times I let our conflicts fill our void. It’s just as well that Kate is not here when it comes to Fol and our increasing fights. She once said she felt certain Fol’s affection toward me was a charade. She believed Fol should be able to say he loves me. I told her neither of us believe saying the word “love” is important when it comes to Partnering.

Fol has the important qualities I want in a life partner. He is confident, accomplished, and resourceful. He supports my work and is well connected and charismatic.

I remember all these things while I wait in his office at the Hexidome. His company rally is still in progress.

I unmute the sound on his media wall and shift the view to the crowd. Per usual, he seems at ease and captivates his audience. As I watch him pace the stage and use his hands to punctuate his words, my nerves grow calm. Becoming his Designated Kin and life partner should be the least of my worries. In his wake, I feel as if I can do anything. His very voice instills confidence.

His speech reaches the part about his company’s history.

“Throughout the ages and despite great hardships, this company has maintained an attitude of innovation. We have succeeded in becoming a one-source supply network for product and fuel delivery to all people.”

During the Great Reversal, our alliance with Universe United brought strength to our position. Our goal has always been for the people. Working alongside Universe United, we fortified existing supply networks until they were no longer susceptible to the tragedies caused by the ill-gotten zeal of religious persuasions. Our logo then became the symbol of an effort that would ultimately eradicate religion worldwide, an institution that has propelled humankind into pointless wars and destruction for ages. It brought this great world to the point where our death rate vastly exceeded our birth rate. Never forget, it is religion that placed us in this great reversal, but it will be human innovation, unencumbered by gods, that will bring us out.”

The seated crowd claps and cheers energetically. Fol smiles and raises his hand to quiet them. I know the history message by heart.

“When, for the sake of our population decline, the Universe United governance board restructured world resources and people groups into twenty-two sectors, our company was ready with a delivery strategy and the alliances to back it up. Each sector’s needs for product were met by our superior and reliable transport system.

Today, although our logo will change, our motto will still be the same. “Delivery conquers need.” Fol gestures to the giant image of the new logo as it appears next to the old on the split screen behind him. “This is who we are. We are an organization of deliverymen and humankind is our boss. Not religion. Not Dictators. Not Ancients.”

Several in the crowd holler out agreement, and then they stand and clap enthusiastically until the whole room is on its feet. Fol waits for the applause and then quiets them again.

“There’s more. I want to give you the future….. Today, in light of our quest to give people what they want—what they need, we’re launching new streamlining measures that will improve product delivery with eligible recipients. These measures will affect every delivery recipient. No one will be excluded. Most welcome will be the improvements that these measures will have on our fuel delivery network.”

Fol stops pacing and stands square to the audience. His fingers interlace. I know he’s waiting for complete silence. He’ll often hold this trademark stance to regain focus before revealing a plan of action. He continues.

“Here’s what will happen……Our new logo will automatically appear on all wrist scan chips indicating whether an individual is eligible to sell or receive a specific product. If the recipient has agreed to the measures spelled out in the Carbon Code, then the logo appears during a scan. The Carbon Code is our new legal name for our revised customer contract. The logo and contract are all tied together in theme reflecting the new fuel arrangement we hope to complete in each sector. Our research team has been successful in harnessing Fusion fuel, which leaves behind a harmless amount of the byproduct of carbon. This achievement is most promising as a source of abundant fuel in a quantity that is more than this world has ever encountered.”

Murmurs in the crowd reflect astonishment at Fol’s disclosure. The room becomes a babble of conversations. Many have known of the fuel changes for quite some time, but completion seemed distant. I’m certain by the reaction that Fol’s progress announcement will be big media news tonight.

Fol holds a finger to his lips, “Ssshhhhhhhh. There’s one more thing…”  The hum of chatter descends. “I also have a personal revelation to make.” An instant hush fills the room. He waits then begins.

“To celebrate this day of new beginnings, I’m taking a fresh step of my own. Today is my Partnering Day, and I chose my union to be with Dr. Satan Jr., head scientist for the Resurrection Project.”

The crowd hoots and cheers. I’m stunned. Fol knew I’d hoped for a bit more anonymity on this day. An uncomfortable heat pours over my body. Fol’s announcement of our private life choice fills me with anxiety. My name and resurrection project work are often used for sensationalism by the media.

How could he do this?