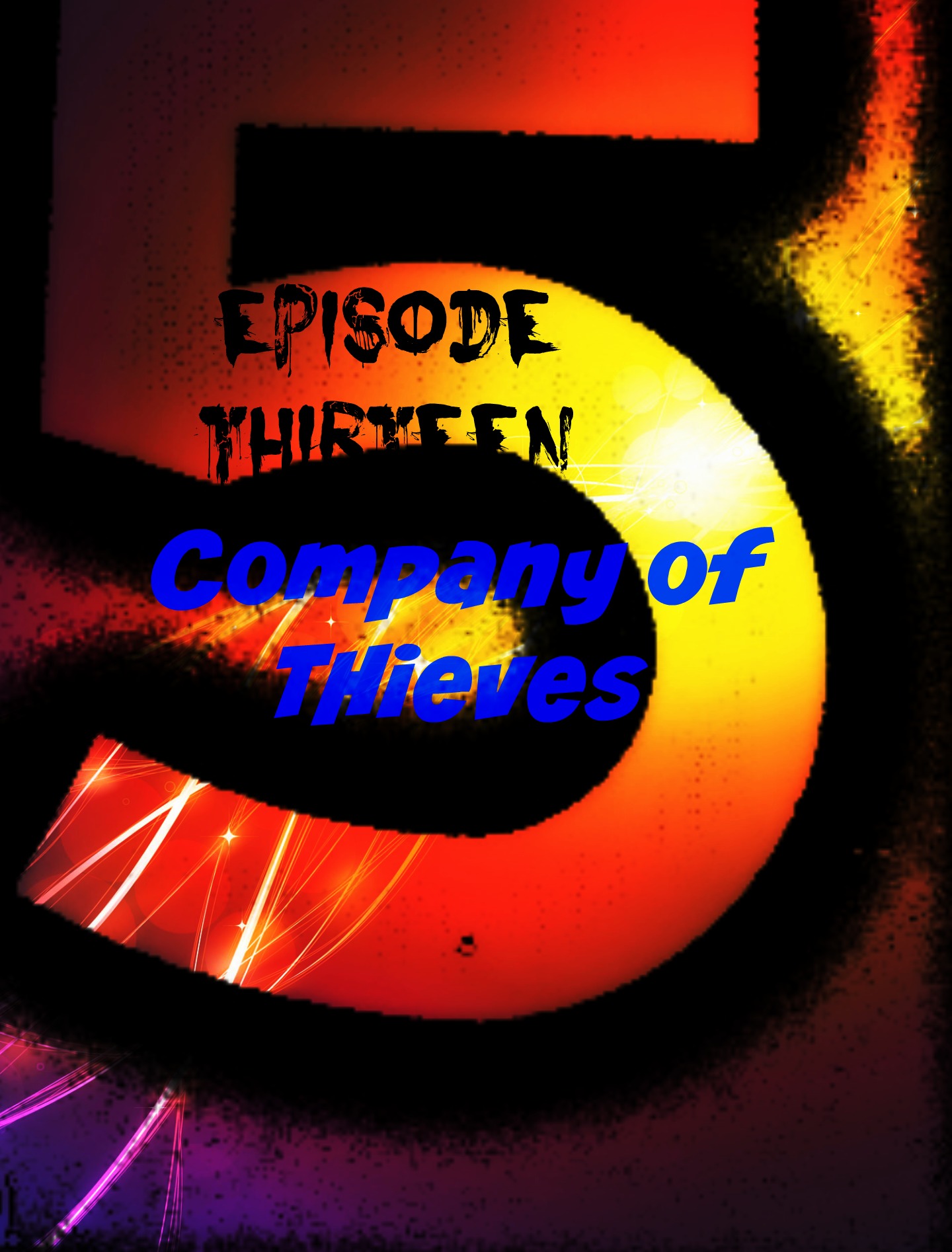 Five: Episode Thirteen is based off the following book excerpt from my science fiction supernatural thriller, The Contingency Generation.

His roar shakes the room and causes the glass shards to dance along the floor. In the curio cabinet, four of his tiny grotesque figurines slide forward. One tumbles off the edge. As soon as it touches the floor, it transforms from statue into life.

The appearance of Abaddon emerging from such a tiny form into his full height, which towers well above the door frame, always entertains him, but tonight, it doesn’t. SJ has defied his authority and interfered with his control.

Abaddon directs a low bow to Fol and sweeps his arm to the side in an exaggerated motion. “Your liege.” His snarling features, half-hidden by cascading rivulets of black unkempt hair, along with his bulging chest and arm muscles impossibly restrained by a shredded black leather vest are enough to compel fear in the strongest of minds. The gigantic sledgehammer dangling from his side completes the impression.

Fol ignores his tribute and beckons to the pile of glass shards. The pieces reassemble into the goblet they were just seconds ago and then fly back into Fol’s hand. As he places the glass on the mini bar, Abaddon laughs.

“Love’s got you broke into pieces.”

Fol exhales sharply and slams his fist on the desk. “Quiet cretin! The power you have can be taken away. I’ve scores who would jump at the chance.”

Behind the jokester, a second figurine has fallen and transformed into Snake, a tall willowy man with dark skin wearing a black and white tracksuit and red athletic footwear.

Ignoring his master’s command, Abaddon prattles on. “She’s gotten the better of you Fol.”

Fol raises his hand, and a sound, the squeal of metal grinding against metal, escalates in the air. The pitch becomes overbearing, and Abaddon cowers and covers his ears.

“Had enough?” Fol lowers his hand and smirks at the thin man who gives no acknowledgement of the sound.

“Apologies, your liege. I spoke before thinking.” Abaddon bows his head.

The noise fades into a dull groan and then ends on a final grinding clank.

“You must remember Abaddon, your skill is in destruction and not thinking or speaking. We have our gifted spin maker, Snake, for matters of expression.” Fol extends his hand to Snake, who hesitates but then grabs hold, makes a face as if in pain, and then quickly releases.

Fol moves to the figurine shelf. “What’s taking them so long?”

The two fiends regard each other but neither speaks.

Fol shrugs and pokes at one statuette until it falls. When it hits the floor, it explodes into a ball of light and rolls about.

“Lucifer travels from the relocation effort in Navana, and Morbid returns from securing the connection between our transfer allies in Region Eight.” Snake speaks in soothing tones while edging sideways toward Abaddon.

“Stomp on him, Abaddon. I’m not to be kept waiting.” Fol gestures to the sputtering light ball.

“Really, your Liege? Is Lucifer to be treated so?” Pleading, Snake moves in front of the light ball, but Fol waves him away and motions to Abaddon.

Abaddon clumps cautiously forward and raises his iron boot over the light orb, but it scoots out of his reach into the corner and then flashes upward. There, wavering illusively for several seconds, the light then solidifies into the eclipsed form of Lucifer. His light pierced outline remains as much a feature of his form as his dark shadowy shape.

“You’re late.” Fol addresses Lucifer, but focuses his effort on the final figure perched on the shelf edge. It topples before his touch even reaches it.

It is Morbid, and he wastes no time shaping into his form, which is a stooped hag of a man with withering skin and gaunt eyes, who leans against a walking cane  filled with pock holes each housing a writhing worm.

Morbid smiles slyly, half bows, and mumbles, “Your grace.” He also gives an almost imperceptible nod to Lucifer, which Fol sees but chooses to ignore.

Fol moves to his media wall and brings up his wall-sized timeline marked by named generations. His henchmen gather before him, their faces illuminated only by the radiance of the image, Lucifer’s outline, and the final efforts of the sun at dusk.

“Fiends, Mortar is on the loose again. The messages arriving from Five are his doing. Of that, I’m certain. But the one who holds all things together will soon discover there is no one left—no one to bind with. The earth is entirely my kingdom now.”

His officers stand before him and nod approvingly. Passion swelling, Fol picks up his light pen and continues. “Each fleeting generation has given me increasingly more to rule….” He points out generation demarcation lines as he speaks but then pauses at the last line and says, “But these… my most valuable Contingency Generation… they have toiled the hardest to control uncertainties. They’ve taken ALL matters into their own hands, and with this, they’ve given ME back everything.”

One Response to Five: Episode 13 … Company of Thieves