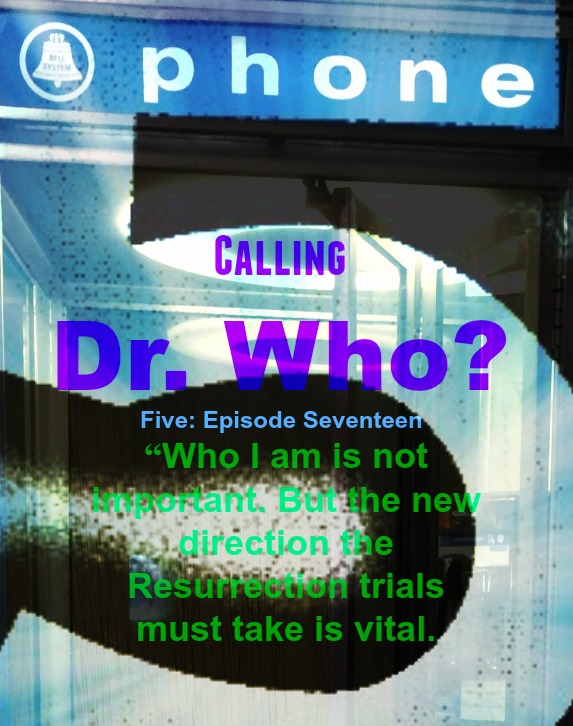 Five: Episode Seventeen is based off the following book excerpt from my science fiction supernatural thriller, The Contingency Generation.

On my first morning back at work, Nesbitt leaves a message requesting that I contact him. My best approach is to play it cool and give no indication of my knowledge of Fol’s influence over my position. I refuse to believe Nesbitt did anything but play along. I tell myself that he’d never turn away money, but that doesn’t mean he believes Birch would be a better candidate to lead the team.

In the conference room, I find him actively sifting through his work. He’s unaware that I’ve entered, since the wall screen is set on mute. His large balding head fills the wall expanse, and his ear is the size of a door. Someone has left the screen magnification at full capacity.

“Morning Nesbitt.” I speak, and he looks towards me, somewhere just past my shoulder.

“I trust your honeymoon gave you some much needed rest.” His attempt at a smile has more in common with the toothy grimace of a gorilla.

He’s cut me off, so I wait while he scribbles some notes. Then he looks up. “Break time is over, and there’ll be no more of it until the first stiff is resurrected.” His eyes shift off screen again.

Good old Nes. Straight to the punch with no time wasted on small talk. He’s treating me the same, which means he still believes in me. I’m certain of this. So certain that I speak my convictions.

“We’re not ready.” I make my voice resolute, but instinctively I know the decision comes from higher up. Maybe even from the audience I can’t see that’s obviously in his office.

“S we can’t run bird resurrects indefinitely.” Nesbitt’s voice crackles. We’re in the same room, but our bodies are over 9000 miles apart. Reception is sketchy.

I dial down the magnification and hope for a concession. “Just a little longer. Oxygen uptake in the bird’s circulatory system has an advantage over humans. We need more time to establish contingencies.”

“You must make a leap of faith. The John Does donated their bodies for the benefit of others, and their families received the approved preset compensation. No matter what happens, we’re covered. We have no liability.”

“That’s not what I’m concerned about. There’s not a consensus on the final adjustments required for human circulatory recovery. Although our data deviations are only slight, we know that ANY unanticipated circulatory variations can lead to a wide range of impacts.” Hoping to have made my point, I sit at the end of the conference table.

“There’ll always be something more to adjust when it comes to perfection, but we’re close enough. It’s time.” Nesbitt swivels in his chair, catches the edge of a paper stack, and knocks something to the floor. I hear a thump and his head ducks below view.

“NO it’s not. We don’t have our best corollary. Primate study would be better if it were allowed. Avian circulatory recovery will always be less problematic due to their enlarged heart structure and more advanced oxygen uptake abilities. Returning life to a human subject before we can solidify our circulatory approach could cause them to experience immense discomfort, possibly to an even greater degree than the pain they may have had upon their initial death.”

“Under proper sedation they won’t remember or even be cognizant of anything for quite some time.” I swear the voice that says this isn’t from Nes.

When he pops back in view with a sour grin, I know it’s his way of telling me I have an unseen audience.

I pretend the media wall connection is botching up and must speak especially loud and distinct. “Sedation is speculative, as is ALL of it. Nothing is known for sure. Resurrection is uncharted territory. Everyone seems to forget this.”

Whoever is driving this meeting is not Nes. He shares my frustration when intelligent research is pushed aside by agendas.

The other voice speaks. “It’s not for the glory Dr. Satan, but out of urgency. The news from sector 21 is unsettling. 48% of the population now test positive to the Rochelle factor.”

“Whoever you are, you know I can’t see you. But you should know that the blood factor connection is not fully proven.”

“Who I am is not important. But the new direction the Resurrection trials must take is vital. I’m afraid it appears nothing can be proven enough to satisfy you, Dr. Satan.” The voice sounds female and oddly familiar.