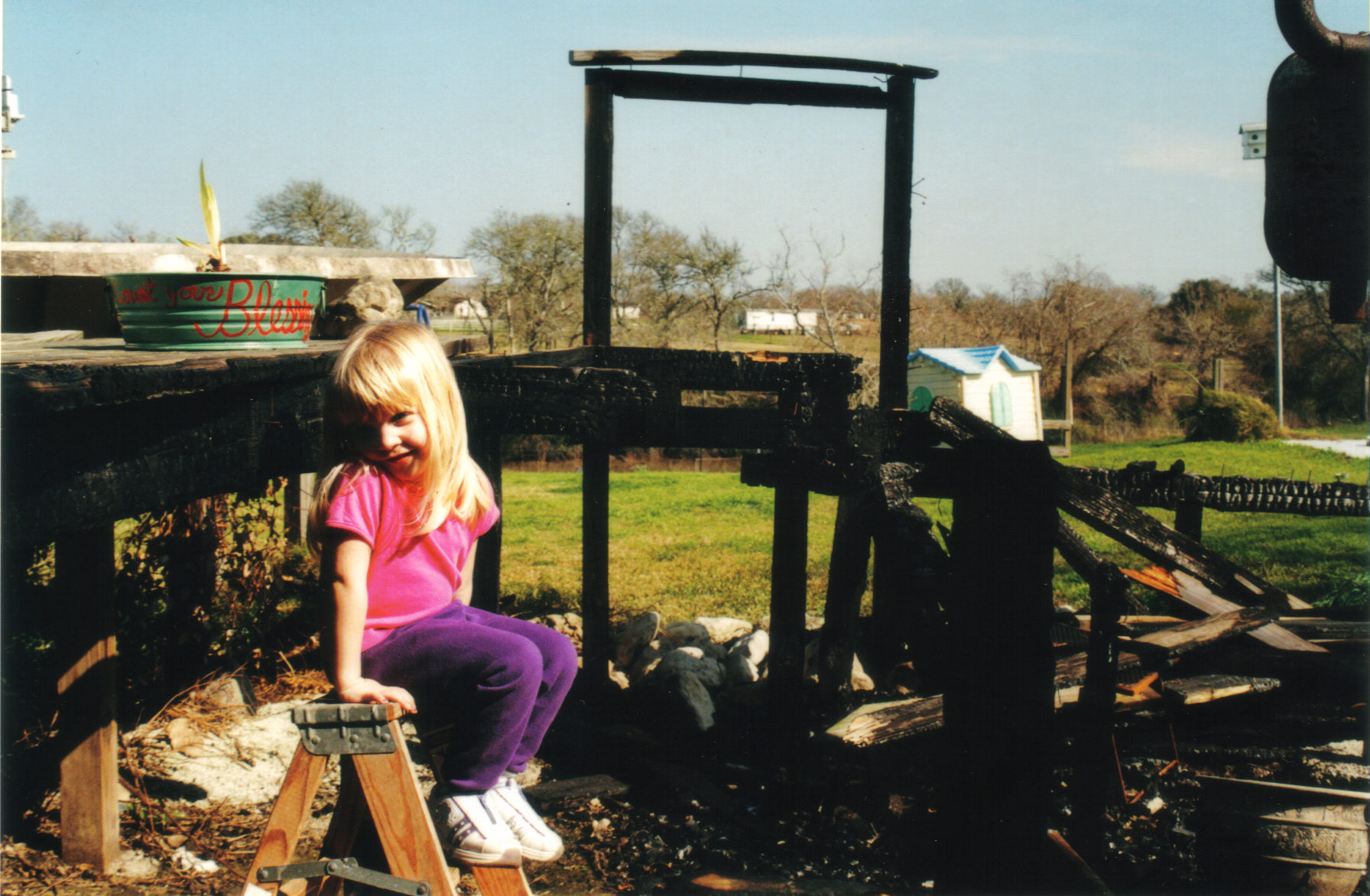 Have you ever been in a pit? Not a literal pit, but an experience that begins with no expected problems, and then everything seems to fall apart? We all go through these. How do you get out?

In the picture I’ve put with this blog post, our 3 yr. old is sitting in a pit made by an out-of-control fire that burned next to her room. The fire began nicely enough in the chiminera where we roasted marshmallows the night before. It ended 9 hours later, after the firefighters spent several hours fighting “hot spots.” November 20, 2002. We will never forget that night.

What “circumstances” had to happen, to allow for this picture?

The fire had to burn high enough for the light to be bright enough to waken me at 4 am. (I awoke and thought it was daylight.) I had to be sleeping on my right side with my face in view of the glass door so the light could shine through. That meant the flames had to soar straight up about 9 feet (no wind) past our porch overhang. If it had blown even a foot sideways, our roof would have ignited. This also meant the outside brick wall covering the wall of her room became so hot from the “glow” of the fire that it steamed when hit with a spray of water.

We could have lost our little girl that night, or at the very least part of our home. Instead, we lost only a 1/3 of our deck.

God’s “know how” saved us, and it still does.

Take comfort and promise in knowing, God is able. Even if bad things happen, He has planned a way to carry you through.

From the Psalms, King David says it this way…

“Rescue me out of the mire, and let me not sink… Let not the flood waters overflow and overwhelm me, neither let the deep swallow me up nor the pit close its mouth over me.”Psalm 69:15

Here are some thoughts about our human ability with “pits” taken from a book of illustrations.

A man fell in a pit and could not get out.

A subjective person came along and said, “I feel for you, down there.”

An objective person came along and said, “Its logical that someone would fall down there.”

A Pharisee said, “Only bad people fall into a pit.”

A mathematician calculated how he fell into the pit.

A news reporter wanted the exclusive story on his experience.

An IRS man asked if he was paying taxes on the pit.

A self-pitying person said, “You haven’t seen anything until you have seen my pit.”

A charismatic said, “Just confess that you’re not in a pit.”

An Optimist said, “Things could be worse.”

A Pessimist said, “Things will get worse.”

Jesus seeing the man took him by the hand and lifted him out of the pit.

Here are some Bible quotes about God’s “Know How”

“...the Lord KNOWS HOW to rescue the godly out of temptations and trials, and how to keep the ungodly under chastisement until the day of judgment and doom.” 2 Peter 2:9

God’s WILL concerning the ultimate “fire “pit” and Your WAIT until then……(from 2 Peter).

“But the day of the Lord WILL come like a thief, and then the heavens WILL vanish with a thunderous crash, and the elements WILL be dissolved with fire and the earth and the works that are upon it WILL be burned up. Since all these things are thus IN THE PROCESS of being dissolved, what kind of person ought you to be in the meanwhile (consecrated? holy behavior? devout? godly qualities?) while you WAIT? (meaning WAIT, and earnestly long for the coming of the day of God when the flaming heavens will be dissolved, and the elements of the universe will flare and melt away)”2 Peter 3:10-12

We have this ahead of us…. “We look for NEW heavens and a NEW earth according to His promise, in which righteousness, uprightness, FREEDOM FROM SIN, and right standing with God is to ABIDE.” 2 Peter 3:13

Pit dwellers unite! Hold up your hand, and be lifted out of your pit! Trust God’s “know how.”