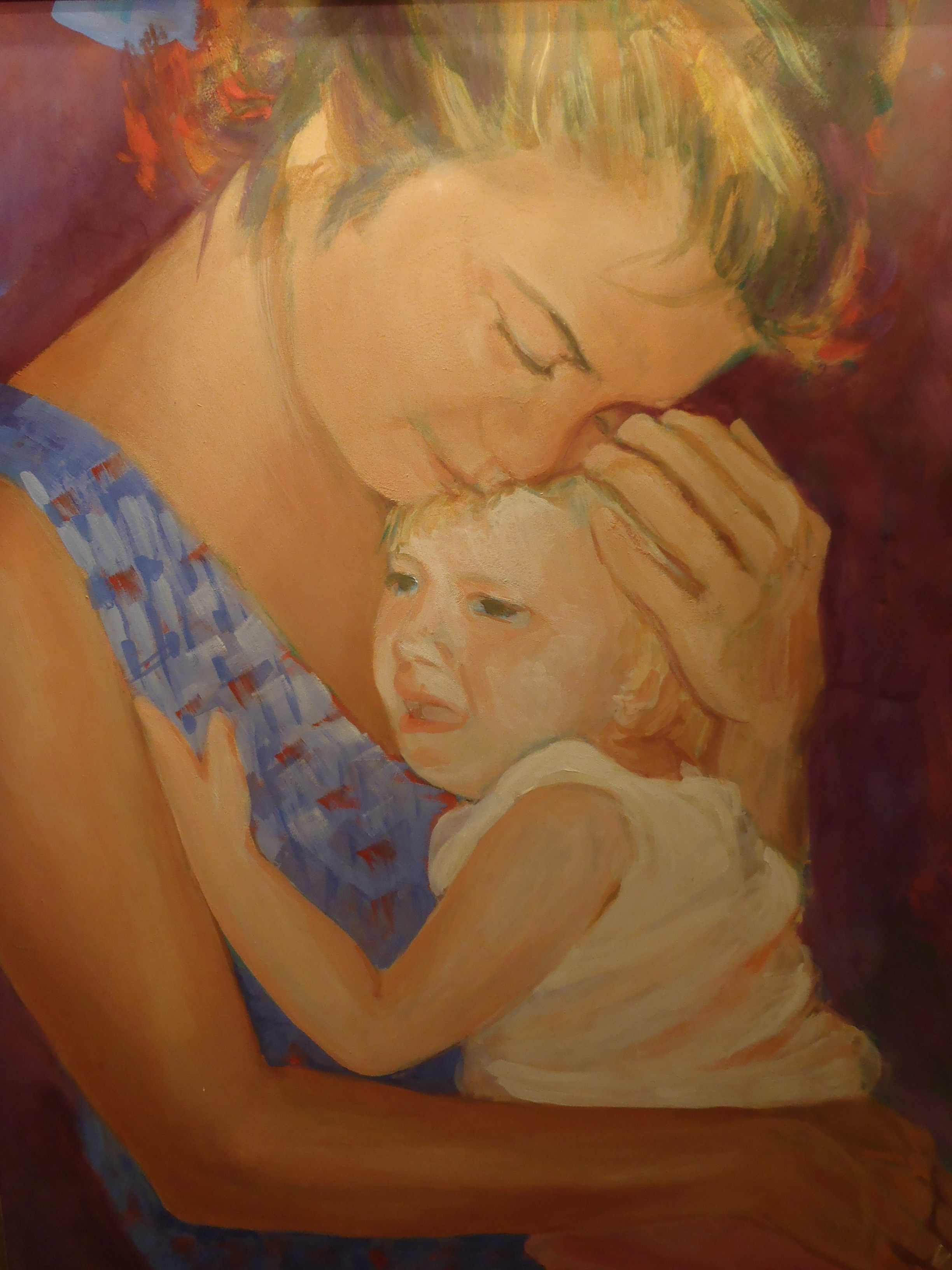 Rule 348 of motherhood. If your child is able to unbutton your blouse, he needs to be weaned. Picture a frazzled mom in line at the grocery store. Fussy, fairly grown “baby” is in mom’s arms facing her chest. The exasperated baby, who has been ogling the checkout line candy, shifts his focus to his human pacifier and takes matters into his hands. Literally. He starts to unbutton the blouse of his sleep-deprived mother. Suddenly mom is fully alert and wrestling with the determined feeder. Ah… if only he was weaned. She would not have to leave the line (the same one she patiently stood in for twenty minutes) because she lacked a third hand. Why does she need at least three prehensile, multi-fingered appendages? One to hold the baby, another to push the shopping cart, and the third to clutch her gaping blouse closed until she finds a discreet corner to re-arrange her wardrobe. Wardrobe malfunctions indeed! But this one occured because of an un-weaned child. This story is true.  I was a very close witness.

David, who is believed to have penned the entire three verses of Psalm 131, must have had “weaning” on the brain. Maybe he had a child in the palace who had recently graduated from the Institute of Single Source Sustenance (mascot-Boobie Heads) to the College of “every-thing-goes-in-the-mouth,” (mascot-Teething Terrors.) No matter what the reason, he equated the ability of his soul to abstain from worry as being “like a weaned child.”

“Weaning” means to stop or cause someone to go without something that has become a habit or is much liked. With babies and young animals, it is a process that involves switching the young one to take in food or liquid other than the mother’s milk. In the beginning, this change in feeding causes a lot of fussing and crying, (and sometimes the mother joins in!) Eventually, over time, though, the small one being weaned becomes accustomed to the new development and more peaceful times evolve.

This illustration translates well into spiritual living. Giving into “worry” is a default mode for many people who are faced with difficult circumstances.

Verse 1 alludes to some of the reasons why “worry” might become a habit. David expresses it in the reverse, however. He lists the things he did NOT do, which in turn, possibly helped him abstain from “worry”.

“Lord, MY heart is not haughty, nor my eyes too lofty; neither do I exercise myself in matters too great or in things too wonderful to me.” Psalm 131:1

In short, David didn’t try to “play God.” He let the things he couldn’t understand remain under God’s ability and direction.

In verse 3, (the final verse of this brief but very beneficial psalm), David challenged the rest of his nation to participate in another good practice to offset worry.

“O Israel, hope in the Lord from this time forth and forever.” Psalm 131:3

David advocated for genuine HOPE IN GOD and not just “positive thinking.”

“Hoping in God” is not a bad place to start if you need to wean yourself from worry!

O God, I am in great need of being weaned from worry. It is a hopeless process if I have to achieve it in my own strength. Thank you that this is not the case and that by Your Spirit, I have the power to be calm and hope in You. Teach me this marvelous skill. Let it envelope my remaining days. May I soon be able to say like David, “I have calmed and quieted my soul like a weaned child.” Amen & amen!